There are fewer things in life better than developing a young player on Football Manager, transforming them into a world-class superstar brings a certain level of pride. Managing a young prospect in FM can be a tricky task but it is all about balance – don’t risk throwing them into the first team picture too soon, but also don’t leave them to play in developmental squads for too long. One of the saves we will be running when FM23 is released will be with Liverpool, who have a rich history of bringing players through the academy and developing young players into top assets. Names like Steven Gerrard and Trent Alexander-Arnold spring to mind immediately, but they also have a crop of young talent in their current squad that bodes well for years to come.

In this article, we will look at some of the top youngsters at the Anfield club, using FM22. We will talk about the top young prospects in the side and how we will manage them in the opening campaign – from loaning them out to heavily involving them in the first team, we have a number of options at our disposal. Players who are under the age of 21 at the time of writing will be included.

An important factor in player development is the facilities available at the club, for both the first team and youth teams, combined with quality coaches of course. As obvious as it sounds, the bigger, richer clubs are usually the ones to have top-quality training and youth facilities. 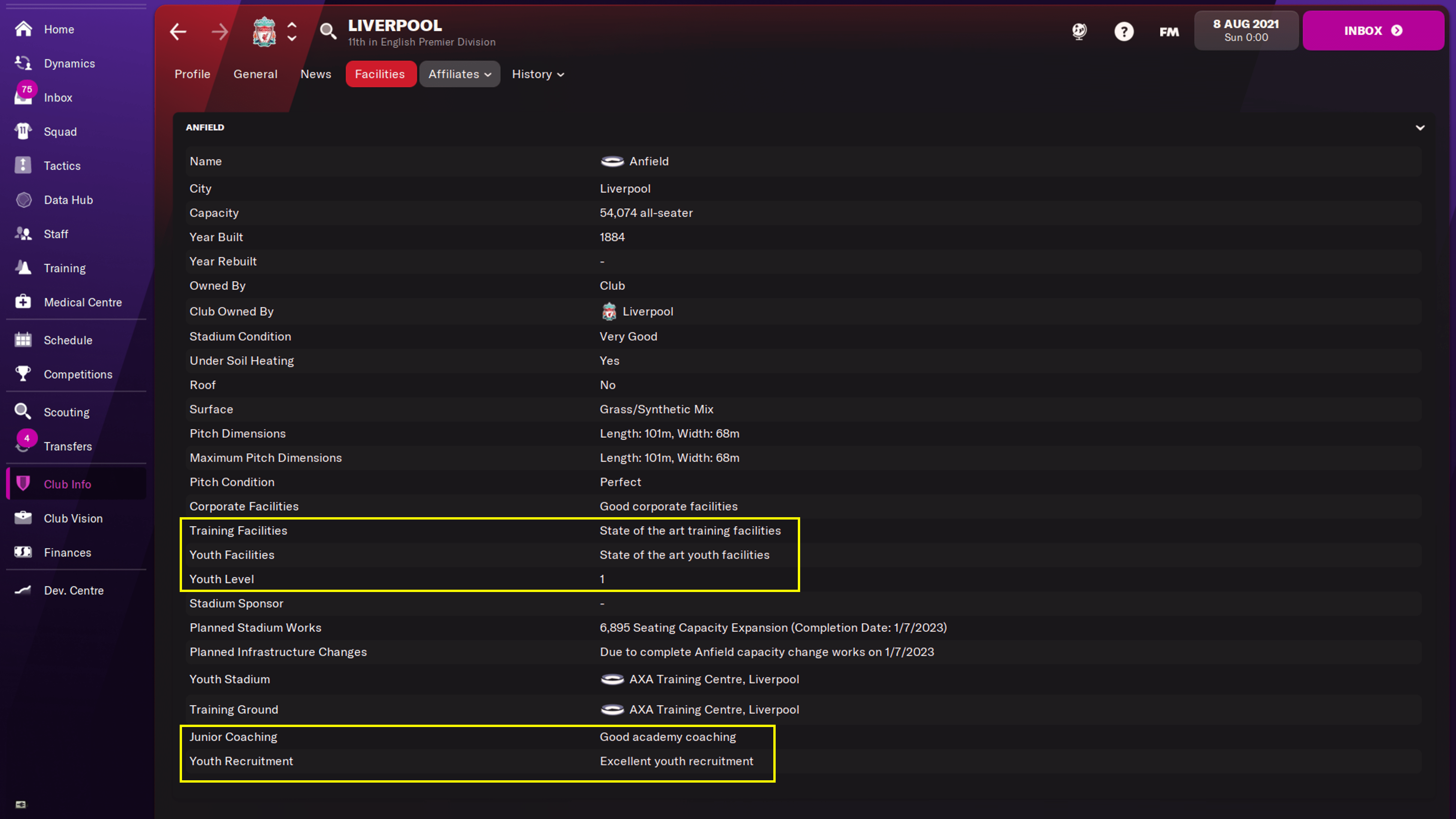 Liverpool have “state of the art facilities” for both training and youth level facilities, giving the club the perfect foundation for development. This is an important factor to keep in mind when thinking about sending a player out on loan – some players who are not far from first-team level but have been sent out on loan may see their development hindered by a club with significantly lower standard facilities. 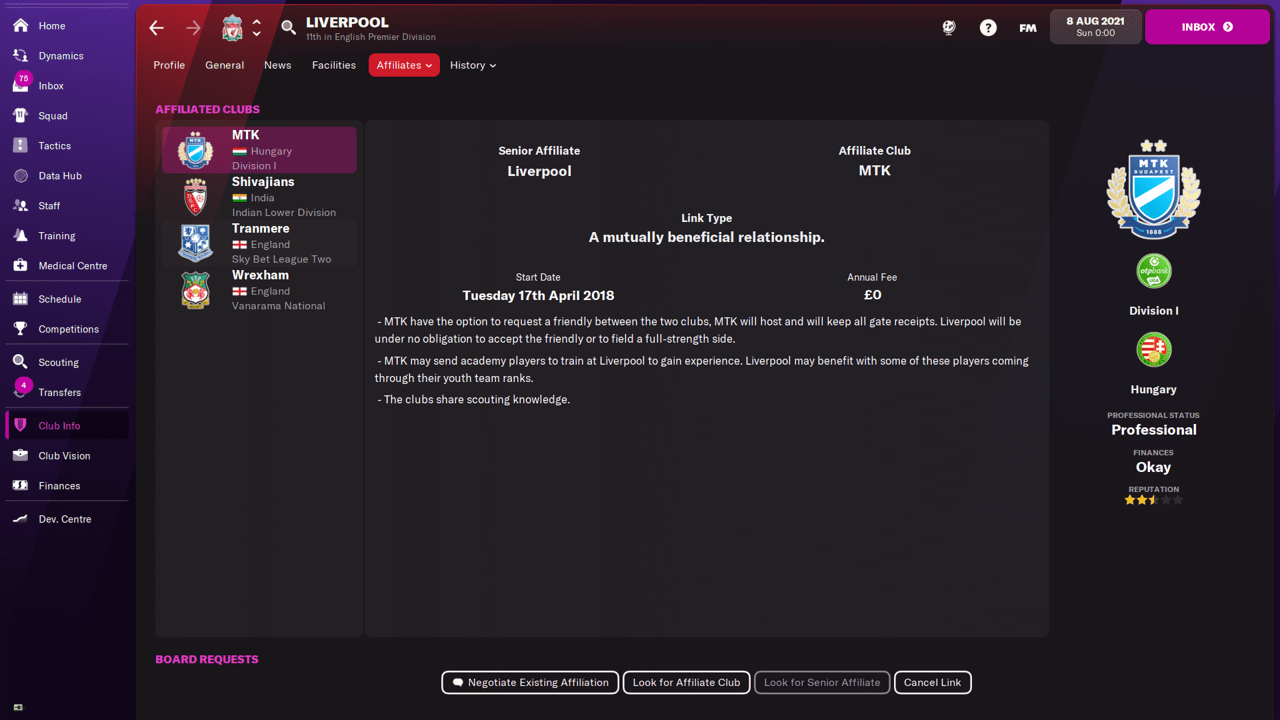 Another way to encourage the development of young players is to utilise your affiliate clubs. Affiliate clubs are teams that you have a link with – a professional partnership which sees actions that benefit both parties. In terms of youth development, the biggest factor is the option to send players out on loan to these clubs. Be aware that loaning players has to be included in the affiliation agreement – this will be listed in the terms and link type. If there is no loan agreement in place, click the ‘negotiate existing affiliation’ button at the bottom and request to add a loan agreement. Once the board agrees to this, you will be able to send them to that affiliated club.

Perhaps the player who will see the most game time of all the players included in this article, Harvey Elliot has already had an impact on the first team in the real world. When he arrived from Fulham, there was a real buzz about how good he could become – the only real concern was his questionable hairstyle! But what are my plans for the talented midfielder in FM23? 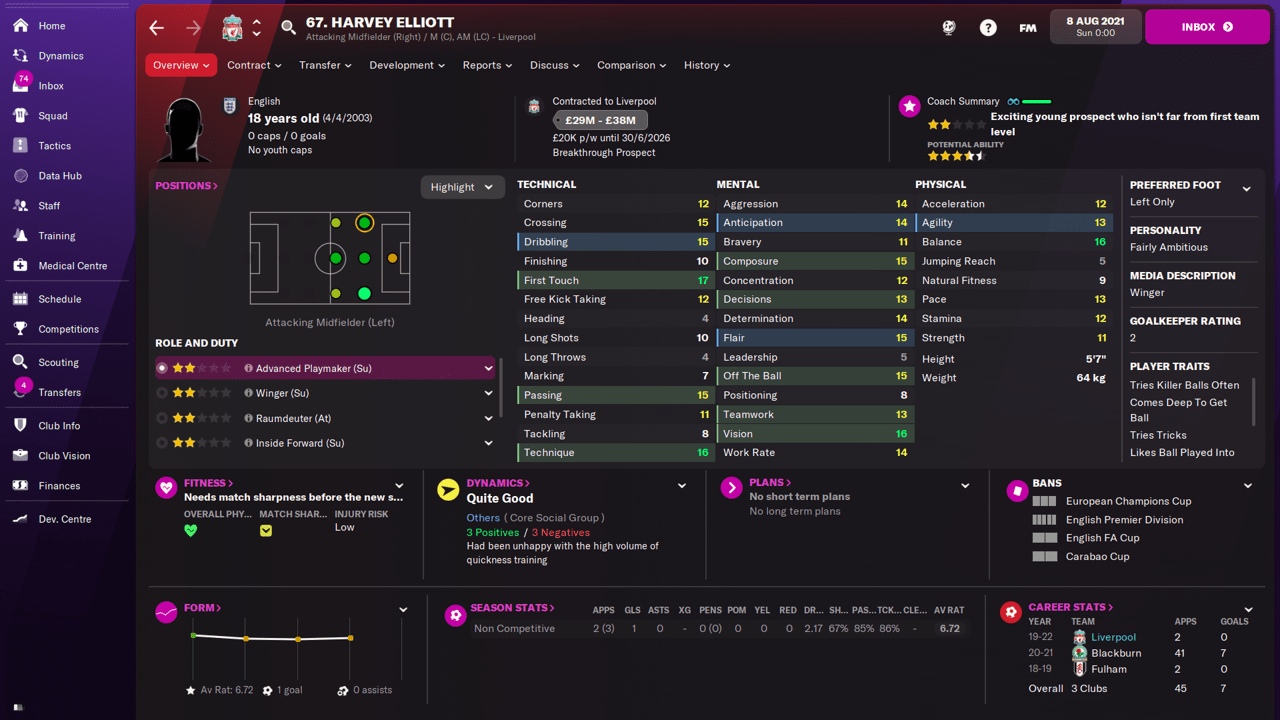 After very little consideration, I made the decision to keep Elliot around to feature in the first team. His positional versatility is a great quality to have in the squad with the number of games we will be playing, and he is more likely to develop more around the first team at Liverpool whilst also getting some healthy minutes.

He fits into the ethos of what we will be aiming for – quick play through the midfield into the final third, and he is able to achieve that with his impressive dribbling. 15 dribbling, 17 first touch, and 16 technique are all remarkable stats that will only get better in time. 15 passing and 16 vision are also strong attributes that allow him to progress possession via passing instead of dribbling. In FM22, his stats in general could well be higher, as well as his CA/PA. In years to come, Harvey Elliot could well be the player we build the team around at Liverpool.

One player who has risen through the ranks at Liverpool is local lad Curtis Jones, who has had a mixed bag of performances in his early years as a pro. His talent and potential cannot be doubted, but producing strong performances on a consistent basis is something Jones has struggled with – injuries haven’t helped the academy graduate either. 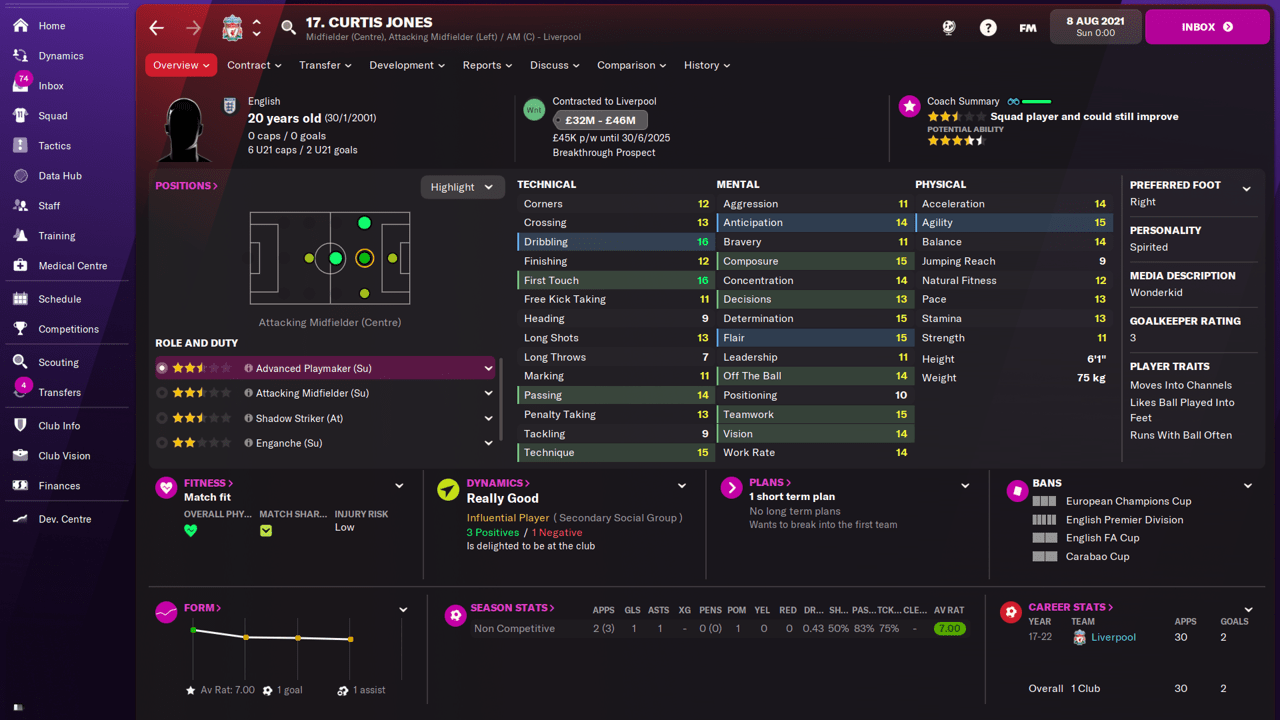 The plan will likely be to loan him out to a Premier League/European top-flight club at least until January. This will give him consistent game time which he will likely not get in my team in the first season, especially since we’re looking to bring an established creative midfielder in. His positional versatility combined with his stats bode well for his future at the club, leaving the possibility of bringing in an older, more experienced attacking midfielder in the first window, which will allow for a smooth transition for Jones into the first team over the next 2-3 years.

Stats like 16 dribbling, 16 first touch, and 15 technique make him a threat in creative situations, and his all-around good stats in other important midfield areas will make him a suitable target for many clubs in terms of a loan move. Depending on his development in the first season, he may be a strong squad player heading into the second season.

Another young exciting talent the Reds have brought in from Fulham is Portuguese is 20-year-old Fábio Carvalho. Another one is capable of playing either central or out wide on either flank, he fits the philosophy of versatility. In the real world, Carvalho has enjoyed a fruitful start to life at Anfield, with good involvement in goals too. 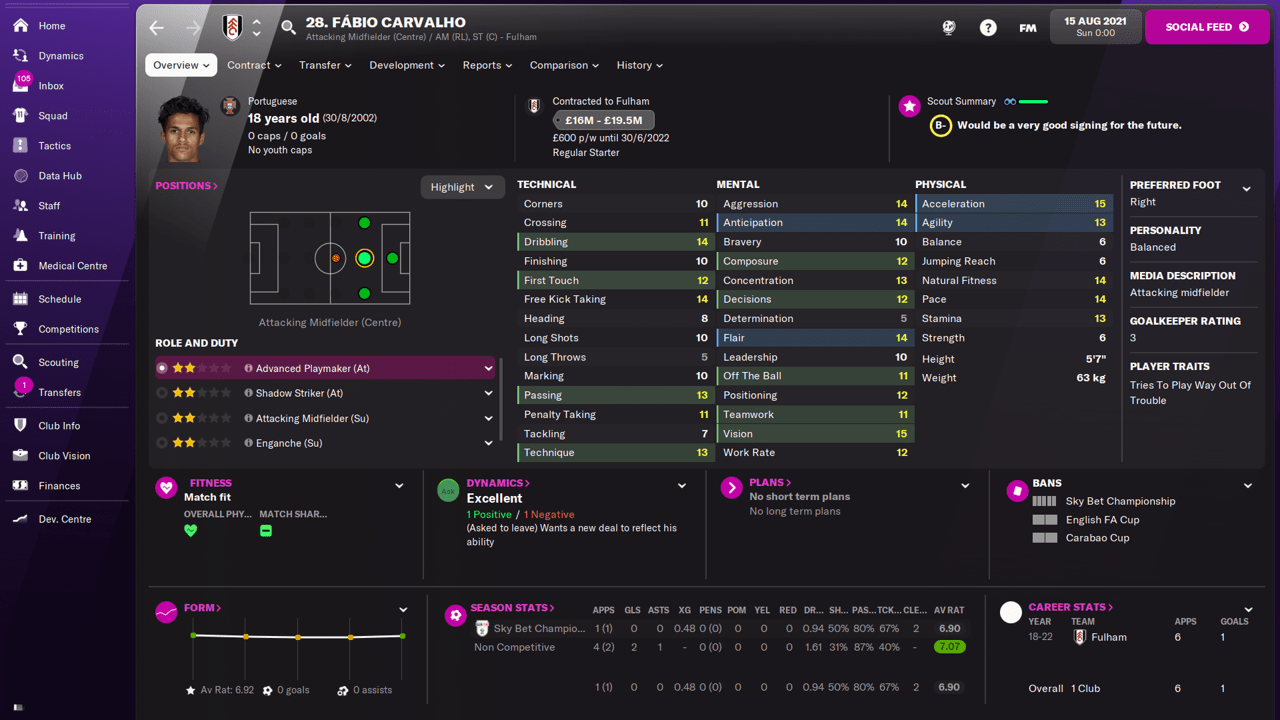 With this player, our decision depends on his stats and CA/PA in FM23. There’s a chance that keeping him around and having him feature occasionally in the first team while also training with them and playing regularly in the U21 team could really bolster his development. Alternatively, listing him for loan to allow him to get soe experience at a lower end top-flight club could also be extremely valuable.

He already has some strong stats in areas like dribbling, passing, and technique, as well at free-kick taking, but has a lot of room for development, so we have to manage him wisely to get the most out of him.

In a previous article, we discussed the need to sign an established right-back to provide cover for Trent Alexander-Arnold, despite the signing of the promising Calvin Ramsey. In FM22, former Aberdeen player Ramsey was very highly rated and was often included in the “top 50 young players in the world” award in the game. However, while some of his stats may be higher in FM23, there is no guarantee that he will have the same impact in the new game. 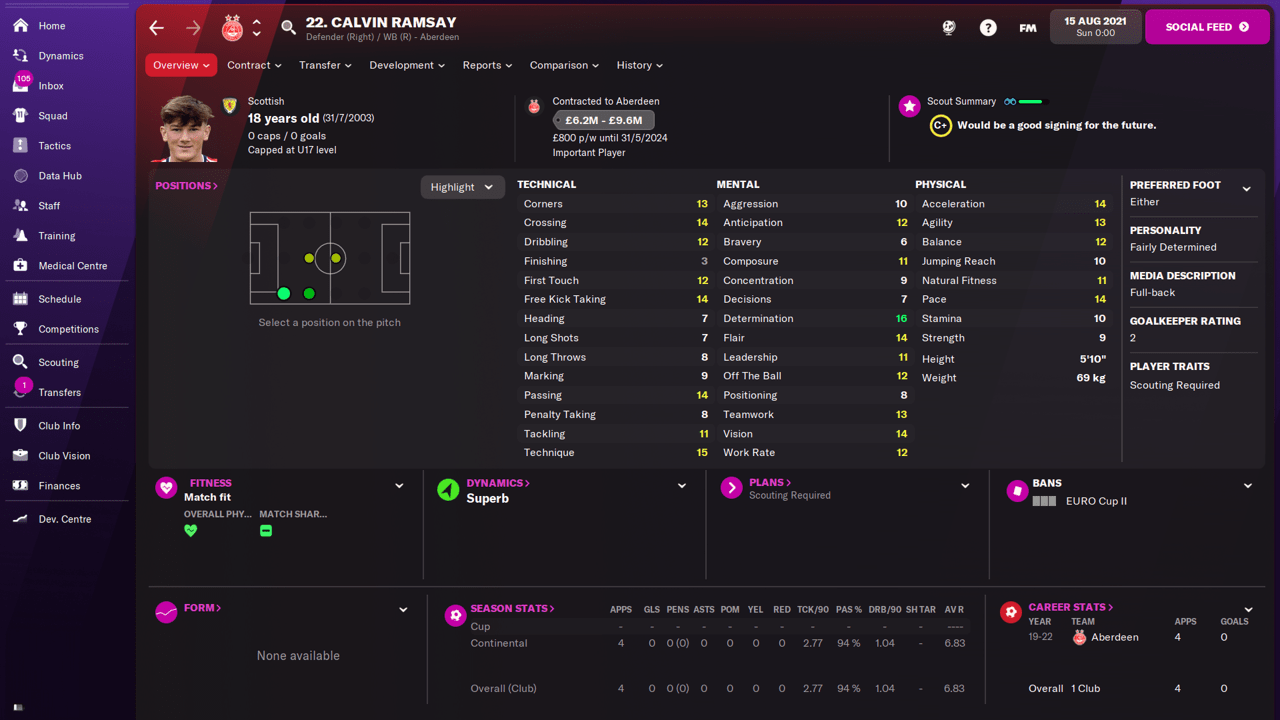 Similar to Carvalho, Ramsey’s immediate future in FM23 is dependent on his stats – is he ready to jump in at right-back if TAA is absent? The plan is to answer that question with yes and keep assessing the situation in the lead up to the January transfer window. If we feel there is a need for a more established player in that position to provide cover, then we will make that move a priority in the January window and look to loan Ramsey out for the remainder of the season. Otherwise, if he looks to be solid enough already, we will continue to put our trust in him as the number two right-back.

In FM22, he already had some strong stats, both in possession and defensively. Decent at set pieces, while also good with dribbling, passing, and technique, he fits the TAA mould in many ways. Defensively, he shows good signs with room for development, but judged on his base FM22 stats alone, he is more like TAA in the way that the attacking side of his game excels his defensive side.

Another promising young defender Liverpool have on the books is 20-year-old Dutchman Sepp van den Berg. Signed from PEC Zwolle in 2019, there was confidence from within Liverpool that he would be a future first-team player. While he is naturally a CB, he is also accomplished as a RB, but a more defence-based RB, rather than an attacking one. 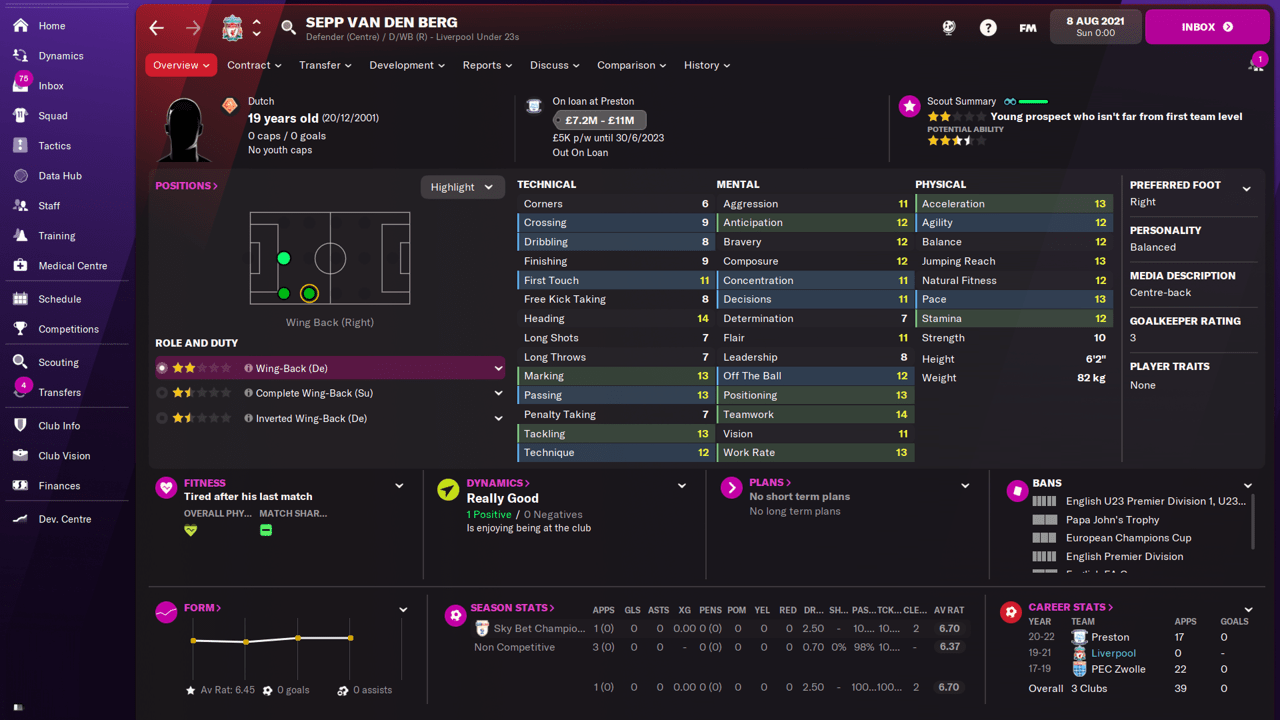 Van den Berg spent a season and a half on loan at EFL Championship side Preston North End – a loan deal that concluded at the end of the 2021/22 season and impressed many during his time at Deepdale. He is currently on loan at Bundesliga side FC Schalke 04, which gives him an excellent chance of first team football in one of Europe’s top leagues. We will see this loan out in FM23 and monitor his progress – he could be ready to join the first team in the second season as a back-up CB.

At 6”2”, van den Berg is built well for a CB, but still has decent pace and other physical stats. His strengths lie in the defensive side of the game but also possesses good ability in areas like passing as well as several mental attributes – all things that bode well in terms of him developing into a first-team CB.

Another local lad and academy graduate, Tyler Morton is close to breaking through to the first team in the real world. He is currently on loan at Blackburn Rovers in the Championship which is a great chance to experience regular first-team football at a competitive level. Morton is a central midfielder, with the ability to play on the right flank as a last resort. 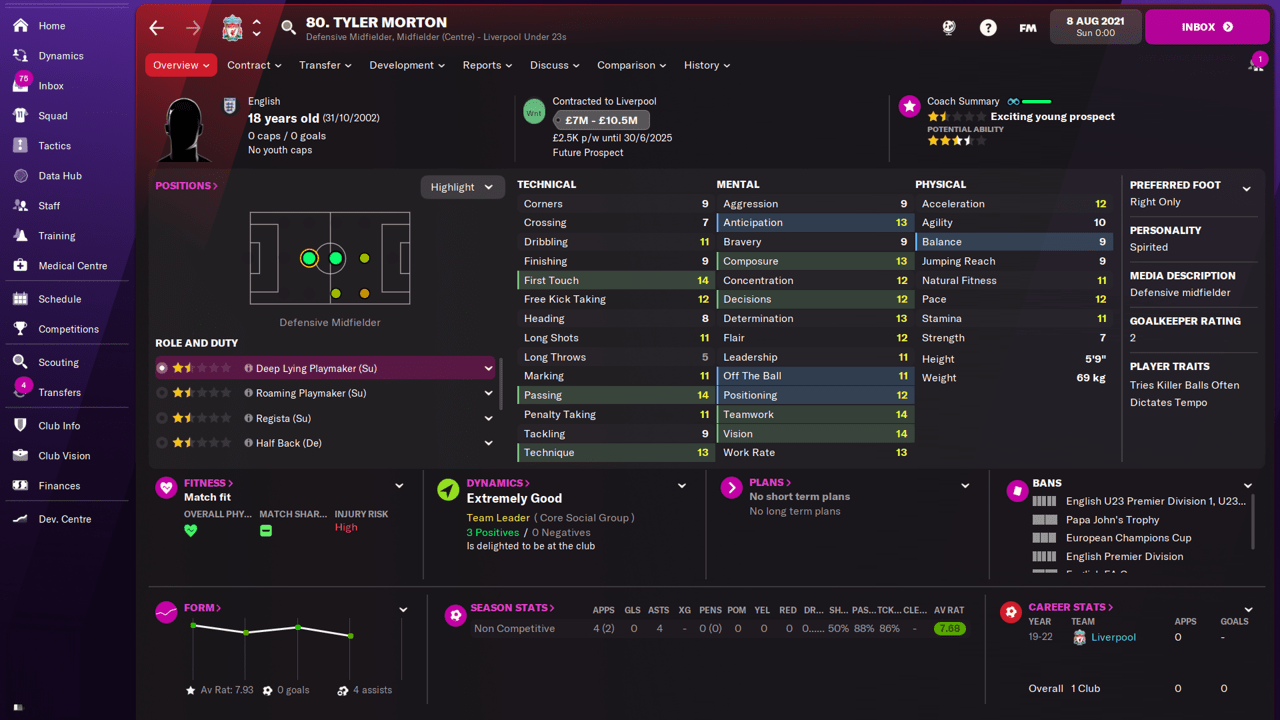 His time with Blackburn in the first season in FM23 will be a great indication in regards to his future with Liverpool. If he plays regularly enough, he may develop into a player worth keeping in the first-team picture in the second season – or a loan move to a top-flight club. He is definitely a midfielder with potential and one to monitor.

He is confident on the ball, with good stats in areas like first touch and passing, but his defensive stats aren’t the best, making him suitable to the deep lying playmaker role. He also has good mental attributes which will only develop more during his loan spell.

We finish with the youngest prospect in this article, 18-year-old Kaide Gordon, who Liverpool picked up from Derby County. Even in FM22 at the age of 16, he had immense potential with some already-strong stats. He is another player who fits the blueprint of being able to play in a central attacking midfield role, out on either flank, or as a centre forward. 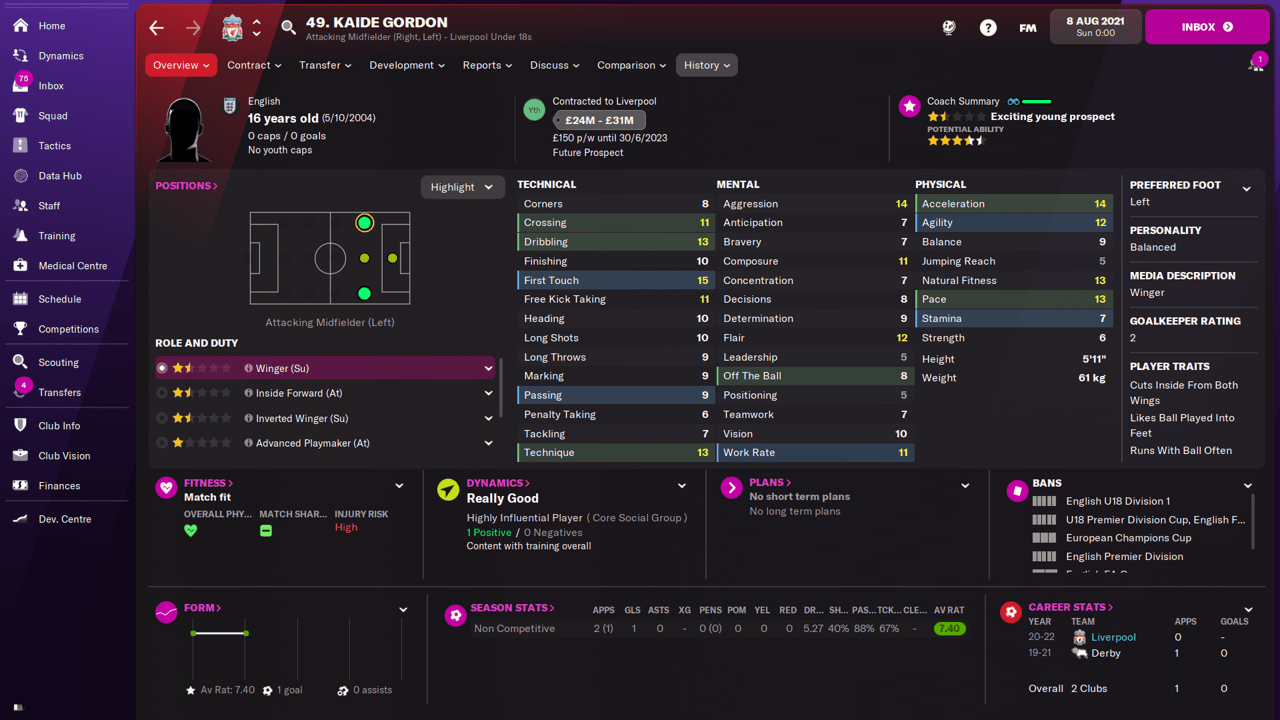 A loan move would be suitable for Gordon as he’s at the age where experience in a professional competition will greatly benefit him. This is where it could be wise to utilise the affiliate club option – a move to League Two Tranmere Rovers would be the best option out of Liverpool’s existing affiliates.

At just 16 in FM22, he already had impressive stats in areas like dribbling, first touch, and technique, while showing good pace and agility. Mentally, there are some areas for concern, but these will develop with experience.

There is a good selection of youth prospects at Liverpool, but you still have to manage them carefully to get the best out of them. Knowing when and where to loan a player out are top observational and judgement skills to have but being able to recognise when a player may be best off staying at the club is equally important. Wherever they play, they need senior match minutes, even if its 15-20 games per season in all competitions – letting them just play for developmental squads will only take them so far.