New signings can breathe a new lease of life into a squad, depleted or otherwise. However, at the same time, there comes a certain level of risk when bringing in a fresh face, or faces. For most FM players, a transfer window – particularly a pre-season transfer window – provides an opportunity for growth in their squad. Whether you want to add some squad depth, bring in some young prospects for the future, or if you’re looking for that star signing to elevate your team to the next level, there is an excitement that surrounds this period of time in the game. It’s like Christmas for FM players.

We touched upon this in last week’s report but bringing in a high volume of new signings in one window, or even in one season, can be detrimental to squad morale and happiness; important factors that you want to stay on top to be successful in FM23. The players included in this article are only options – listing them here doesn’t mean that every player will be signed in FM23, but you need a contingency plan in case plan A falls through. In previous articles in this series, we have highlighted particular areas that we will target for improvement, which are the areas we will go through in this guide.

The following tips & screenshots will touch upon navigation tips in a transfer environment, and we will also touch on scouting but we will go into more depth on scouting in a future article. 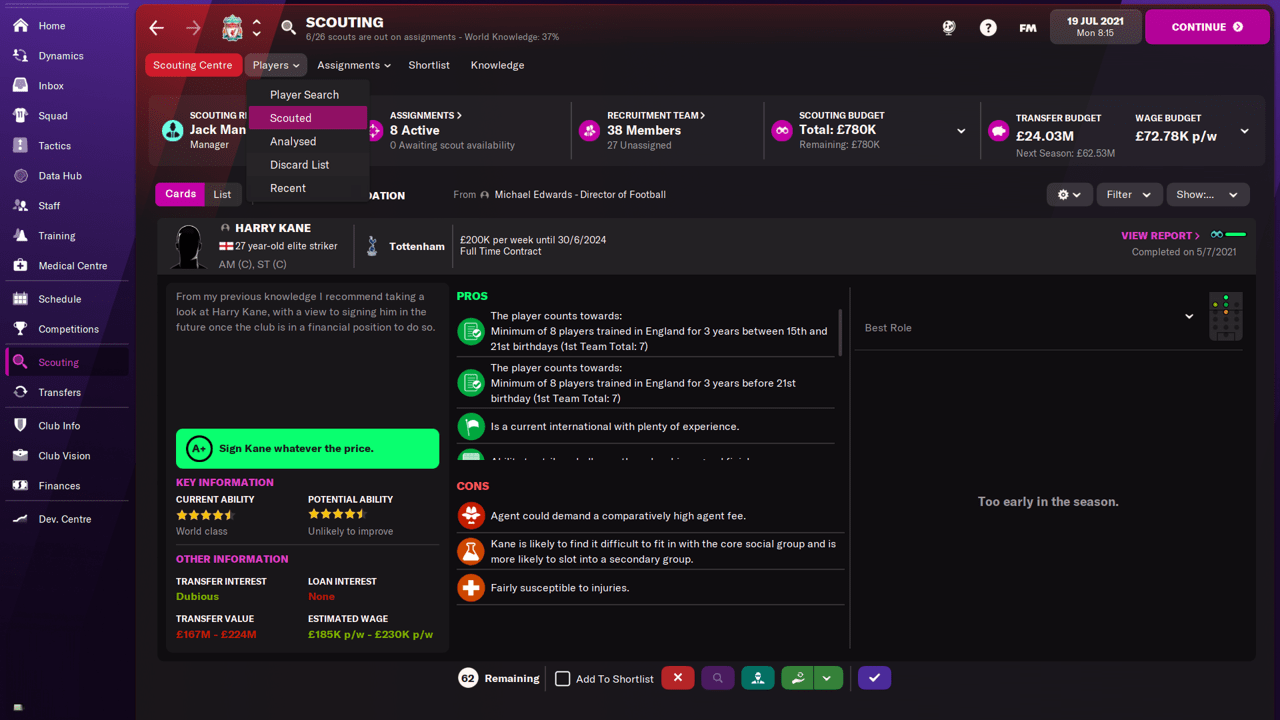 When joining a new club on FM, there can be some uncertainty in the transfer market in terms of who to look for and where to start looking. Luckily, the game lends a helping hand here via the scouting staff already working at the club. On the bar on the left side, hit the scouting tab, which will take you to the scouting hub. Here you will often find reports on players that are recommended by your scouting team but as we can see from the first suggestion in the shot above, they can sometimes be unrealistic. Instead, hit the ‘players’ drop-down box at the top and then selected ‘scouted’. You will be taken to a screen similar to the one below. 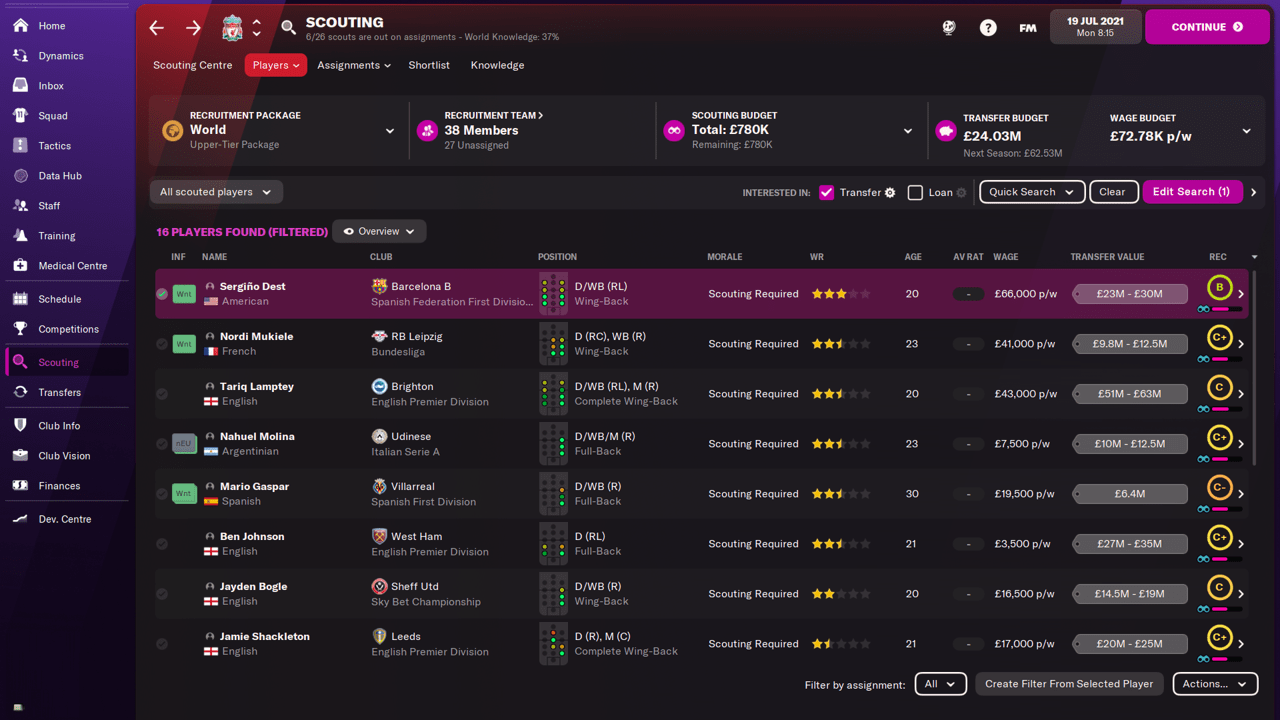 What you see is a database of players that your existing scouting team have already identified and reported on. Narrowing down the search can be a very useful tool in finding quick targets that you already have knowledge of, which is what is shown above. One of the targets on my list is to sign a good quality right-back who can provide support as a back up to TAA – or even serve as a first-choice right back if you choose to play Alexander-Arnold as a midfielder! There are some interesting choices in the initial search that we see above, and unfortunately, my top two choices in Nordi Mukiele and Nahuel Molina would be unavailable in the first window in FM23 as they have recently moved clubs. Nonetheless, this tool is a great way of finding players quickly or to simply seeing an overview of the work done so far by your scouting team.

As highlighted in recent weeks, I will look to bring in a goalkeeper that serves as a stronger back-up keeper to first-choice Alisson. While I view this as an important area to improve, I do not want to spend heavily on this as the new player won’t be playing as many games. However, quality is still a key factor – like how Manchester United had Sergio Romero as their number two a few years back. A goalkeeper with real quality serving as a number two. To find some quick solutions to fill this gap in the team, I used the tool we just discussed above, which provided me with two interesting choices. 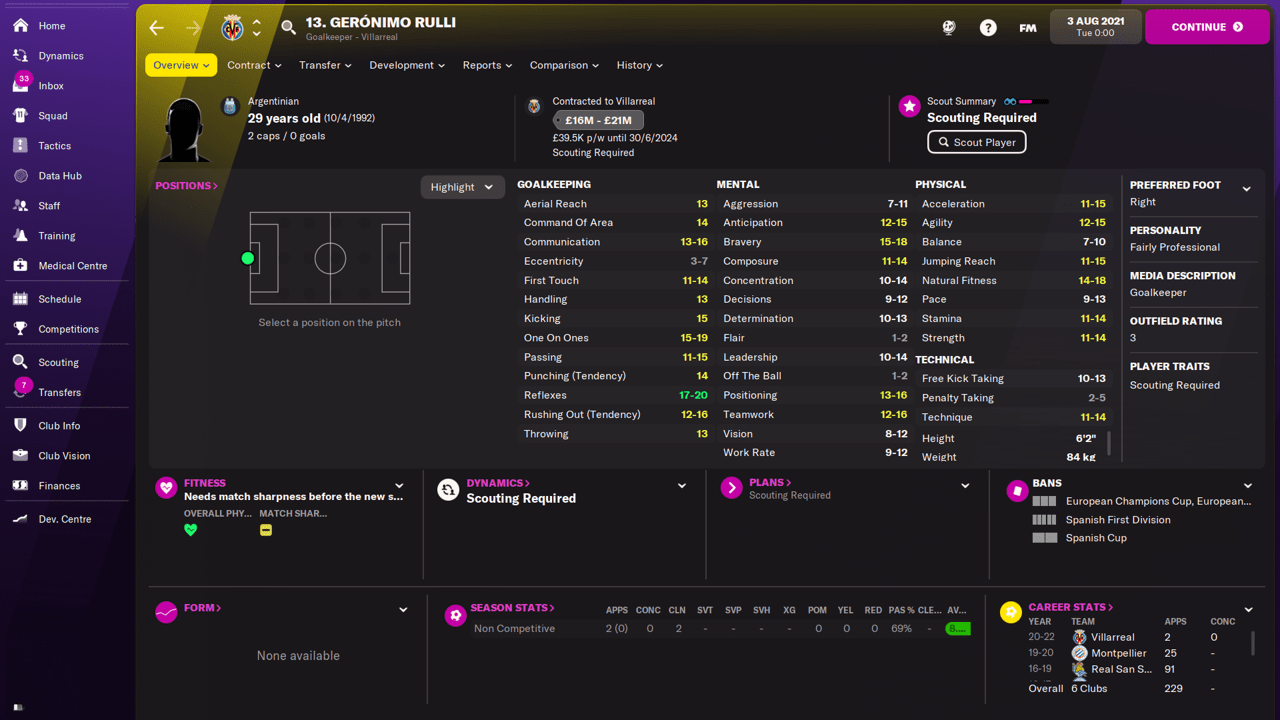 The first name will not be a new one to many. Gerónimo Rulli is a keeper with good experience in multiple top leagues, and as you can see from his stats, he should be a solid choice. His transfer value on FM22 was £16m-£21m which is slightly higher than I would look to pay for a back-up keeper, but there is a chance that this value decreases in FM23. Even if it doesn’t, I’m sure it’s nothing a bit of negotiating can’t cure. Rulli’s wages are also a positive factor and one of the reasons I picked him out. At £39.5k per week, he is a bargain, but I should be aware that he may demand slightly more for joining a club like Liverpool. 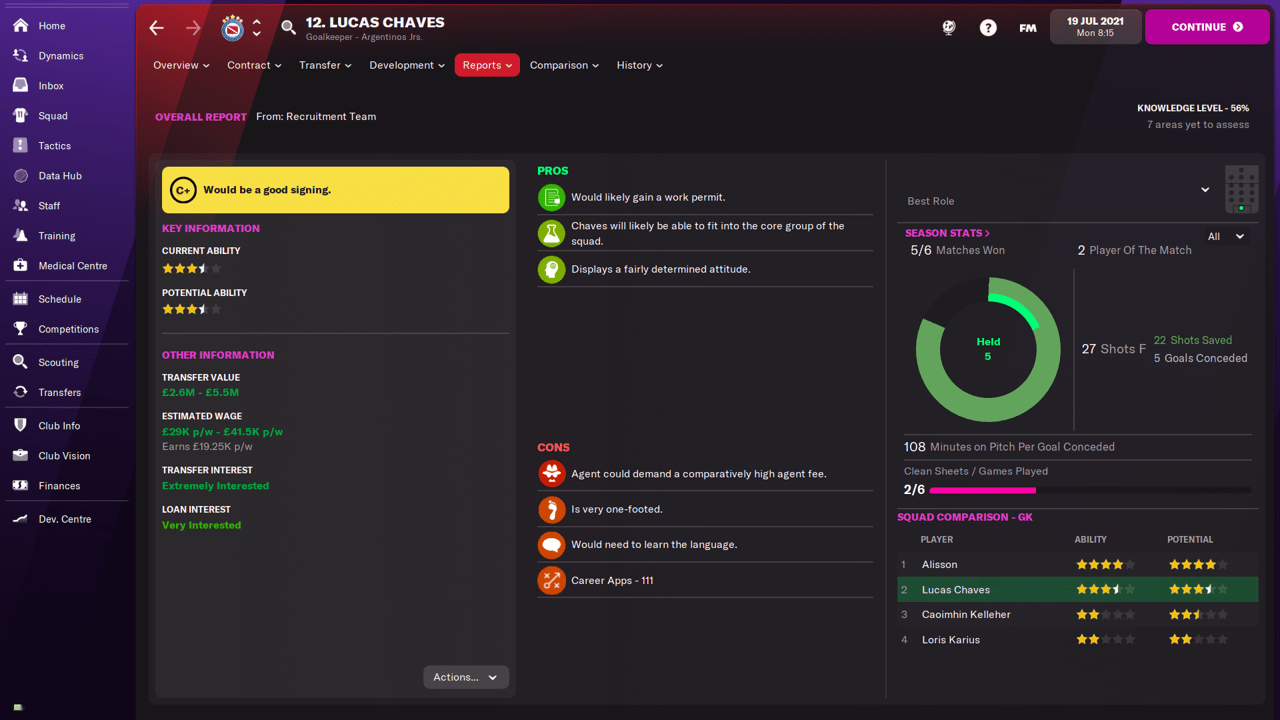 The second choice is a name that I honestly hadn’t heard before finding him on the ‘scouted’ page on FM22. Lucas Chaves, a 27-year-old keeper who is currently on the books of Argentinos Juniors, has been picked out by my scouts with excellent initial readings. A low transfer value and wage demand paired with a high interest in joining the club, negotiations should be very smooth. Ability-wise, early reports place him at 3-star CA which excels any other keeper at the club other than Alisson.

There lies some risk in signing this player early on though. The reports on his ability may not be fully accurate as the scouting department only has a 56% knowledge level on him, which you can see in the top right corner. Personally, I would take the chance on signing this player early on for a number of reasons. If he arrives at the club and turns out to be significantly less talented than his reports suggested, then I won’t have lost much money in signing him. Besides, his market value will likely increase anyway just by coming to the Premier League, so making a profit on him would be possible. On the other hand, if he arrives and excels, then we have achieved our goal of finding a number two.

There have been many questions about the defensive ability of Trend Alexander-Arnold in recent months, but his ability on FM is high, so he will remain my first-choice right-back. There is a need for a suitable back-up, though. While the club has signed youngster Calvin Ramsey, one must wonder how good he will be in FM23, and if he isn’t ready to be direct support for TAA, then we must dip into the market. 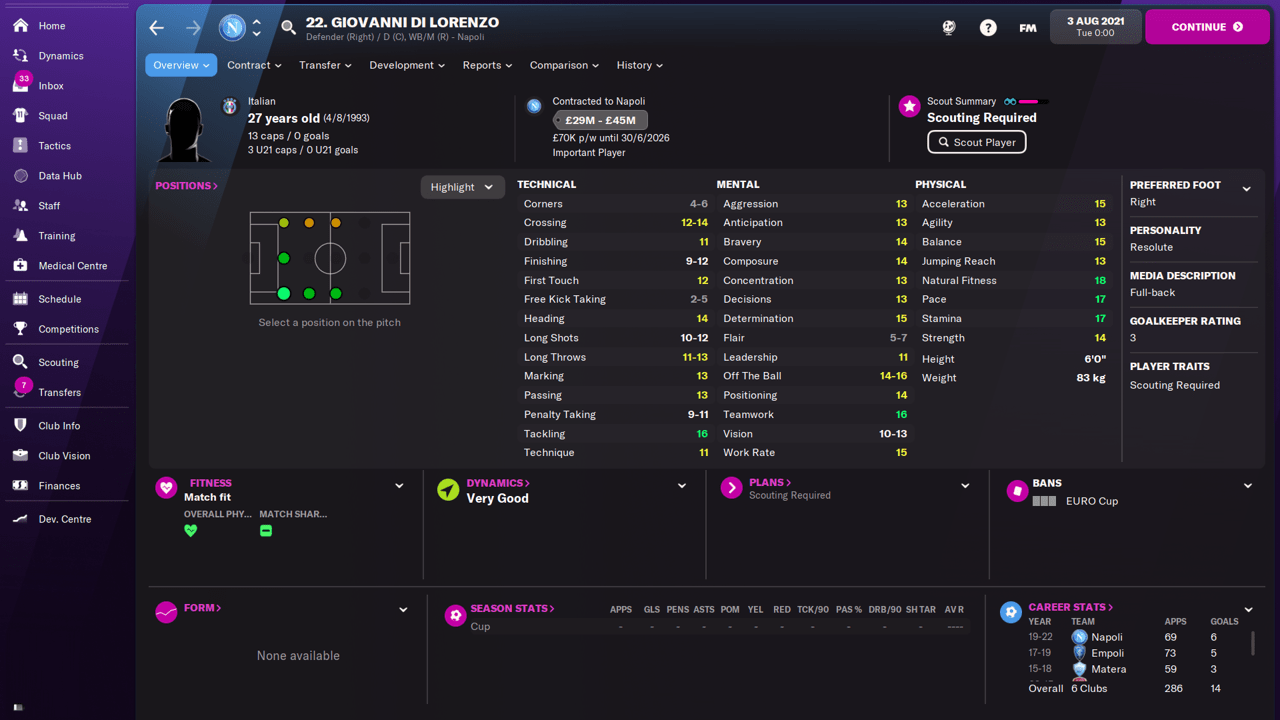 My initial favourite option would be Giovanni Di Lorenzo, a 29-year-old right-back at Napoli. Versatile, Di Lorenzo can also play comfortably on the right flank in midfield or in central defence. He has good stats for attributes like crossing and passing, so he has the required talent on the ball. He also excels in tackling and has brilliant physical stats, making him a more than suitable choice – one that could even rival Trent for the number one spot. The one hurdle could be market value, which lies at £29m-£45m on FM22. Offering a player to swap or utilising the instalment method of paying could be the way to convince Napoli to let him go. There are other names that we could look into, but this is easily my go-to.

We all remember the recent injury crisis Liverpool had, and I know I’m not the only one who has experienced the same thing in FM. At first, you may see it as an opportunity to give game time to some youngsters or fringe players, but after a while, you start to miss your key players. With a number of Liverpool’s midfielders having a record for being somewhat injury prone, I thought it wise to identify a potential signing to bring into the fold. 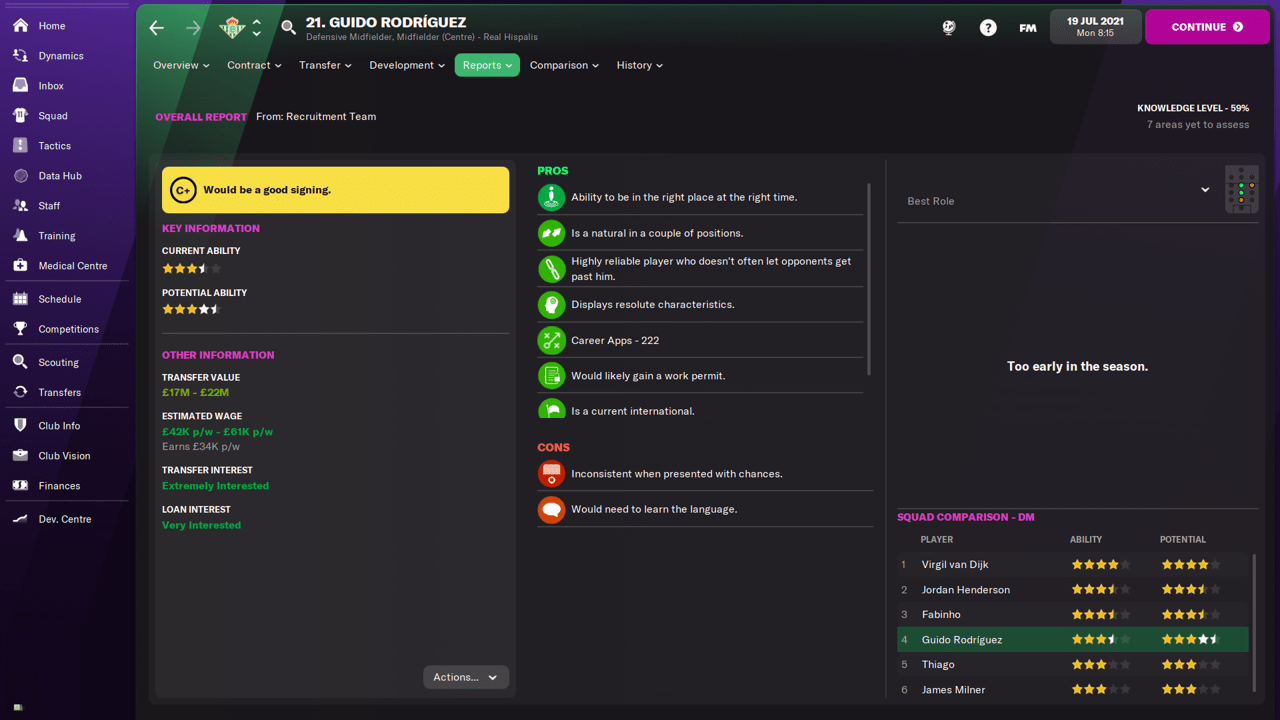 The first option is a very economically sound one. Guido Rodríguez is a well-rounded central midfielder whose biggest strengths lie in defensive attributes, but he can also contribute in possession too. At 3-star CA, he certainly has the calibre to slot in at the Reds, and he isn’t injury-prone either big bonus. A fairly low transfer value and wage demand would also make this a sensible option to pursue. 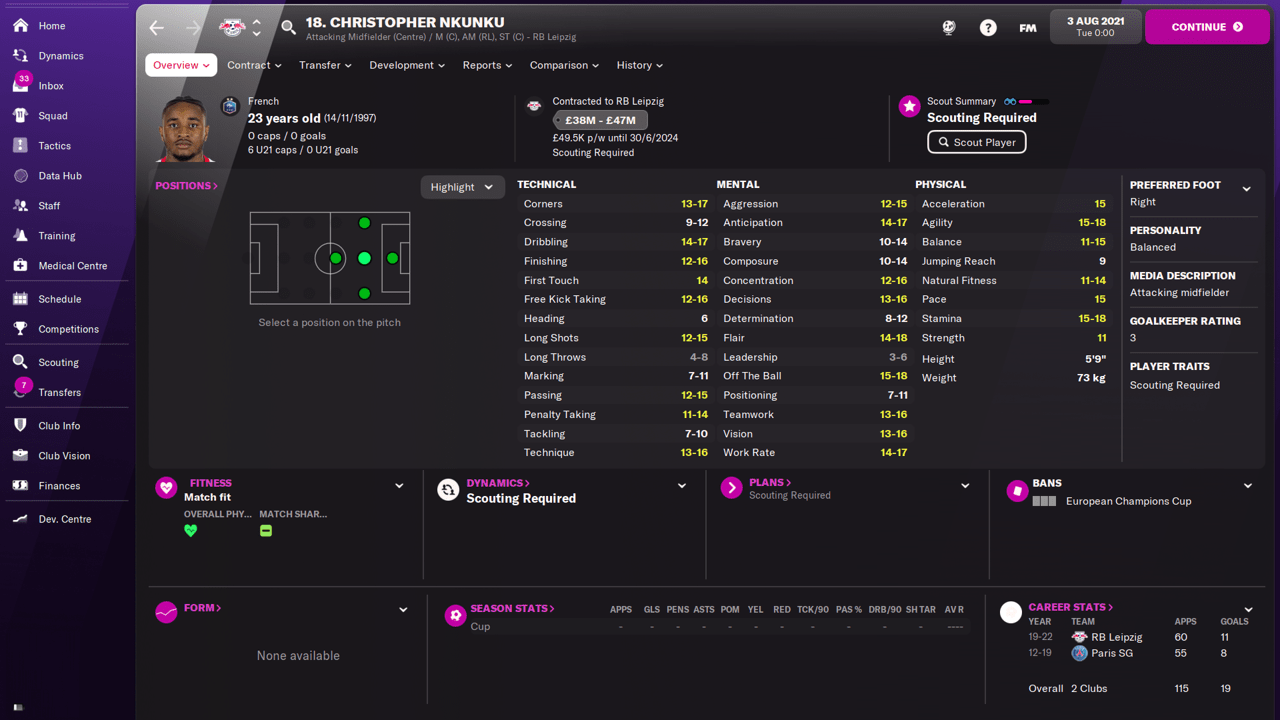 If you wanted a player who is more technically gifted and offers something in a more attacking notion, Christopher Nkunku could be an excellent choice. While there is talk about his future in the real world with Chelsea reportedly already agreeing terms with the Frenchman, until anything official is unveiled, he is a viable option. His stats speak for themselves – he excels technically with good technique and ball control and has a talent for set-pieces. Essentially, he possesses all the key attributes of a creative player. He also has the ability to play a number of other positions effectively as you can see from his report card above.

Don’t be fooled by his market value that you see above, as I suspect this will be significantly higher in FM23. Even if it is, he is a player that is worth breaking the bank for, especially as he is only going to develop into a better player than he already is.

Yes, there are other areas that I could look to inject fresh talent into. We’ve discussed before the option to replace Sadio Mane, but truthfully I believe Liverpool already have enough firepower to cause damage in FM23 thanks to the new signings they have made. Instead, I looked to add depth in key areas by signing players that have the ability to provide quality when called upon, but who also have the potential to push for a spot in the starting line-up.

The post Football Manager 2023: A guide to transfers for Liverpool FC – part 2 appeared first on Football analysis, news, betting and opinion from Liverpool.