Chelsea will kick-start their season with an away trip to Everton in the English Premier League. The Blues finished third in the league last season, and Thomas Tuchel’s side will be one of the contenders competing for the league title. Everton, on the other hand, struggled last season and escaped relegation in the 37th week of the competition. Both teams have different ambitions this season and have made some changes in the squad in the summer.

Chelsea finished last season with 22 wins, 11 draws, and six defeats. The Blues scored 76 goals with an xG rate of 69.24. In return, the defence conceded 33 goals with a low xGA rate of 34.46. Chelsea will be without their powerhouse centre-back, Antonio Rüdiger. They had a few changes in the backline, and the German manager will look to settle them as soon as possible.

Everton finished the last season in 16th position with 11 wins, six draws, and 21 losses. The Toffees scored 43 goals with an xG rate of 47.36 and conceded 66 goals with an xGA rate of 57.33. Everton will be without their star player, Richarlison, who made a move to Spurs in the summer. Frank Lampard has brought in a few new recruits to improve the situation at the club.

Let us look at some of the stats from last season, and these will help us to know what can be expected from these two teams. 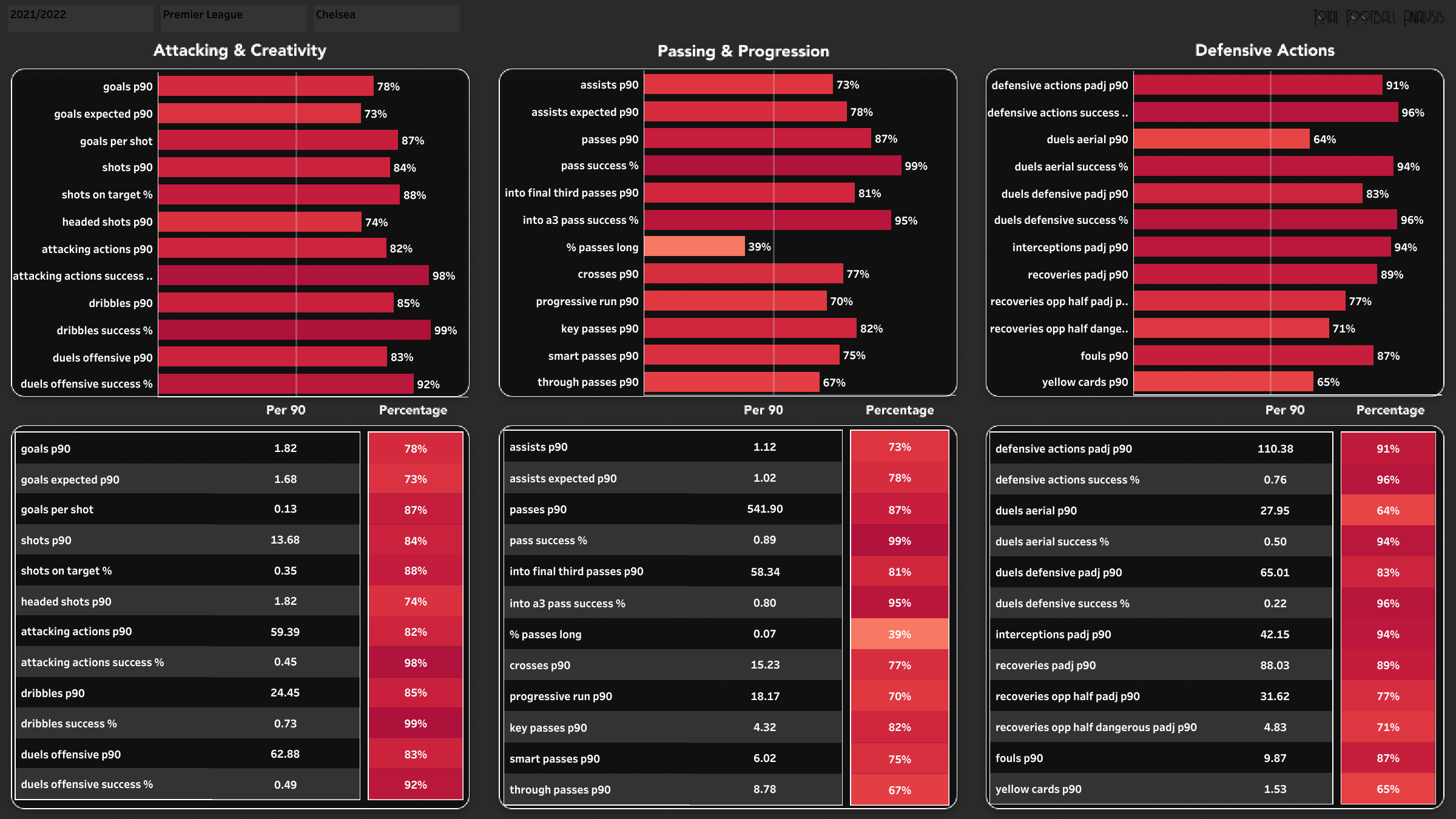 Chelsea were the third-best team in the league last season. The above viz shows the attacking, passing, and defensive stats of the Blues. When looking at the above chart, the general rule is that the longer the bar, the better the performance — you can see the league average in the middle, and the % is the percentile rank the player is in. We can see that Chelsea were highly ranked amongst other teams. The Blues had a high attacking action success rate and were effective with their passing. They will look to perform better this season and stay at the top. 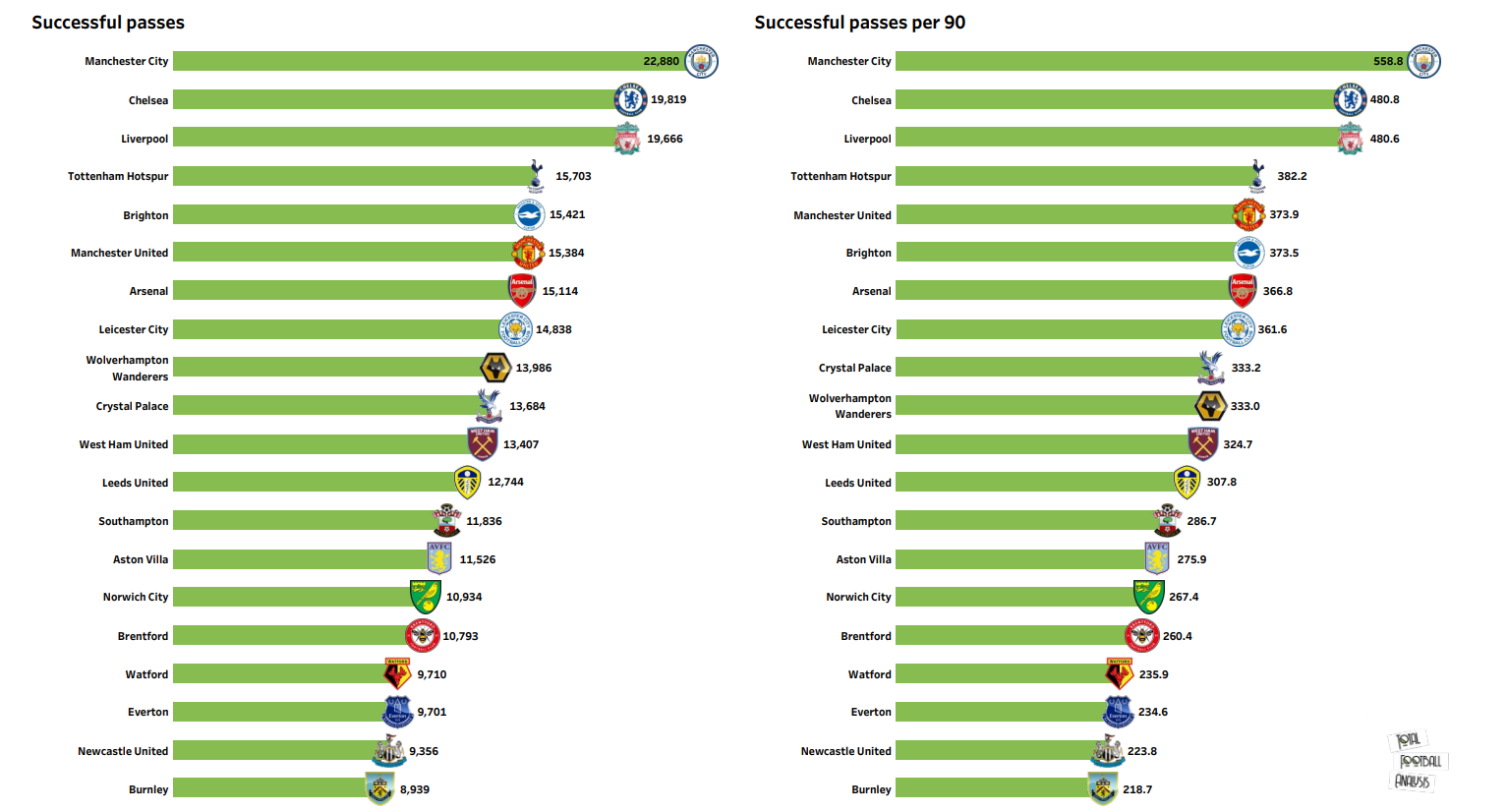 One of the main reasons behind Chelsea’s success was their ability to hold the ball and a high passing accuracy rate of 89%. Despite attempting 480 fewer passes than Liverpool, the Blues were ranked second in the league for accurate passing attempts. Chelsea’s defenders like to get involved in the plays, and they are responsible for creating plays from the back. 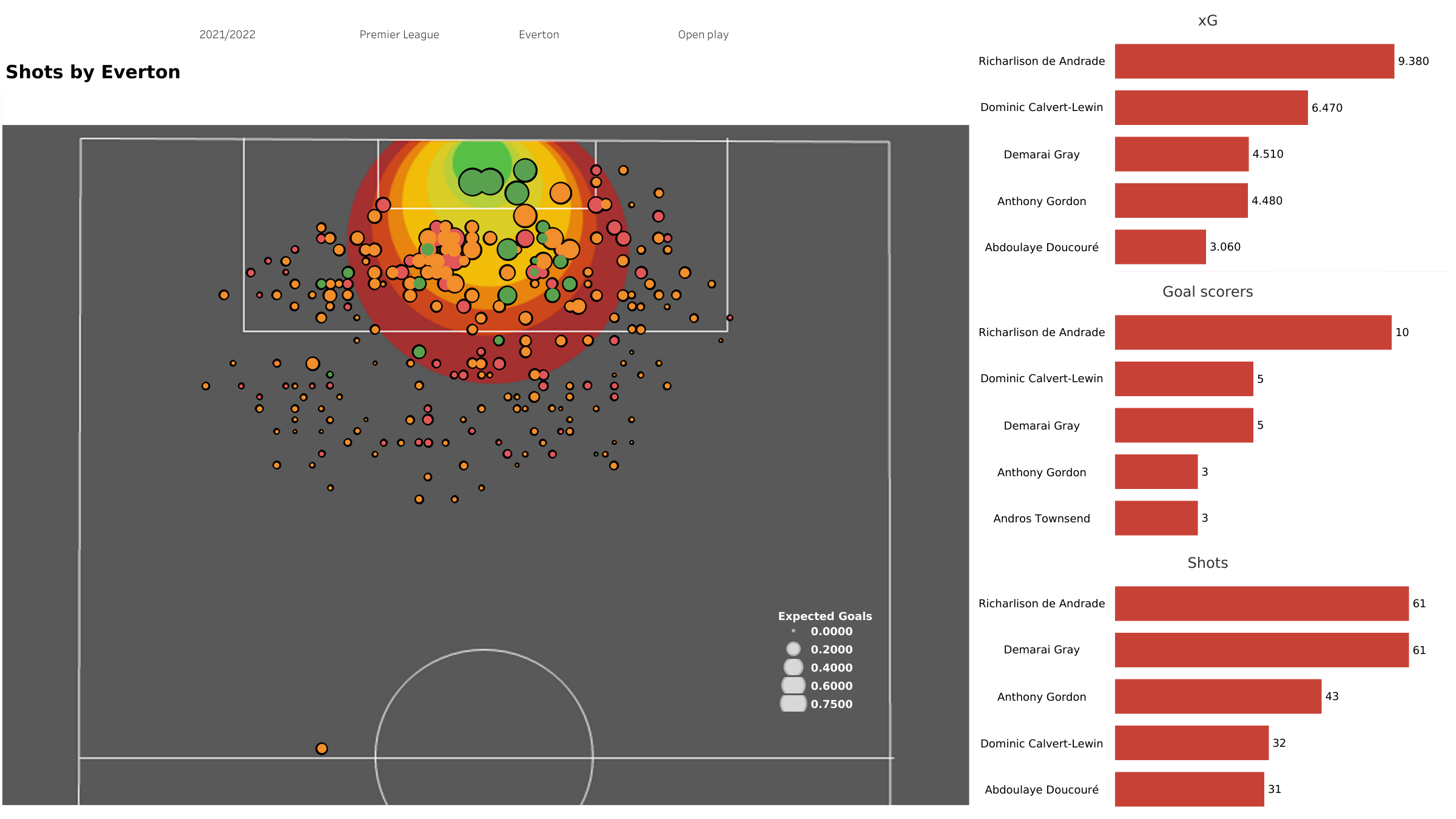 Everton’s biggest struggle last season was to find the back of the net. Dominic Calvert-Lewin was injured, and that added a lot of responsibility on other players’ shoulders. Everton players attempted 407 shots with an average of 9.8 shots per 90 minutes. They hit the target 135 times with an average of 3.2 shots on target per 90 minutes. The above viz shows all the shots that were attempted from open play. Everton scored fewer goals from open play, and the manager will look to improve this stat in the upcoming season.

Dominic Calvert-Lewin’s knee injury will keep him out for at least six weeks. Seamus Coleman and Salomon Rondon are the other notable absentees.

Timo Werner and Armando Broja are the injury concerns in Chelsea’s camp. Raheem Sterling and Kalidou Koulibaly could make their debut for the Blues.

Chelsea will be the favourites to take three points from this match. They were inconsistent last season, and that resulted in a loss of points in some of the matches. This time, Thomas Tuchel will expect better results from the players. Everton, on the other hand, need to start the season on a positive note. The fans won’t accept a poor finish this season. Frank Lampard is under some pressure, and he will expect his team to take him out of that zone.

The post Everton vs Chelsea Preview: 3 things on the cards according to the stats appeared first on Football analysis, news, betting and opinion from Chelsea.