Chelsea will travel to the Gtech Community Stadium to face Brentford in the English Premier League. The Blues are on a four-match winning streak and are coming off a 2-0 win over Aston Villa last weekend. Chelsea are still unbeaten under Graham Potter and they have a fair chance of remaining unbeaten under their new manager. However, Brentford aren’t an easy side to beat. They are also sitting in the mid-table and are coming off a win over the weekend.

Chelsea sits fourth in the league table with six wins, one draw, and two losses. The Blues are starting to find their touch in the league. They have scored 15 goals and conceded ten in the nine games played this season. The average xG rate of the team is 1.53 and the xGA rate is 1.47. Chelsea has only kept three clean sheets all season, two of which have come in the last two games. The Blues have also scored five goals combined in the last two matches. 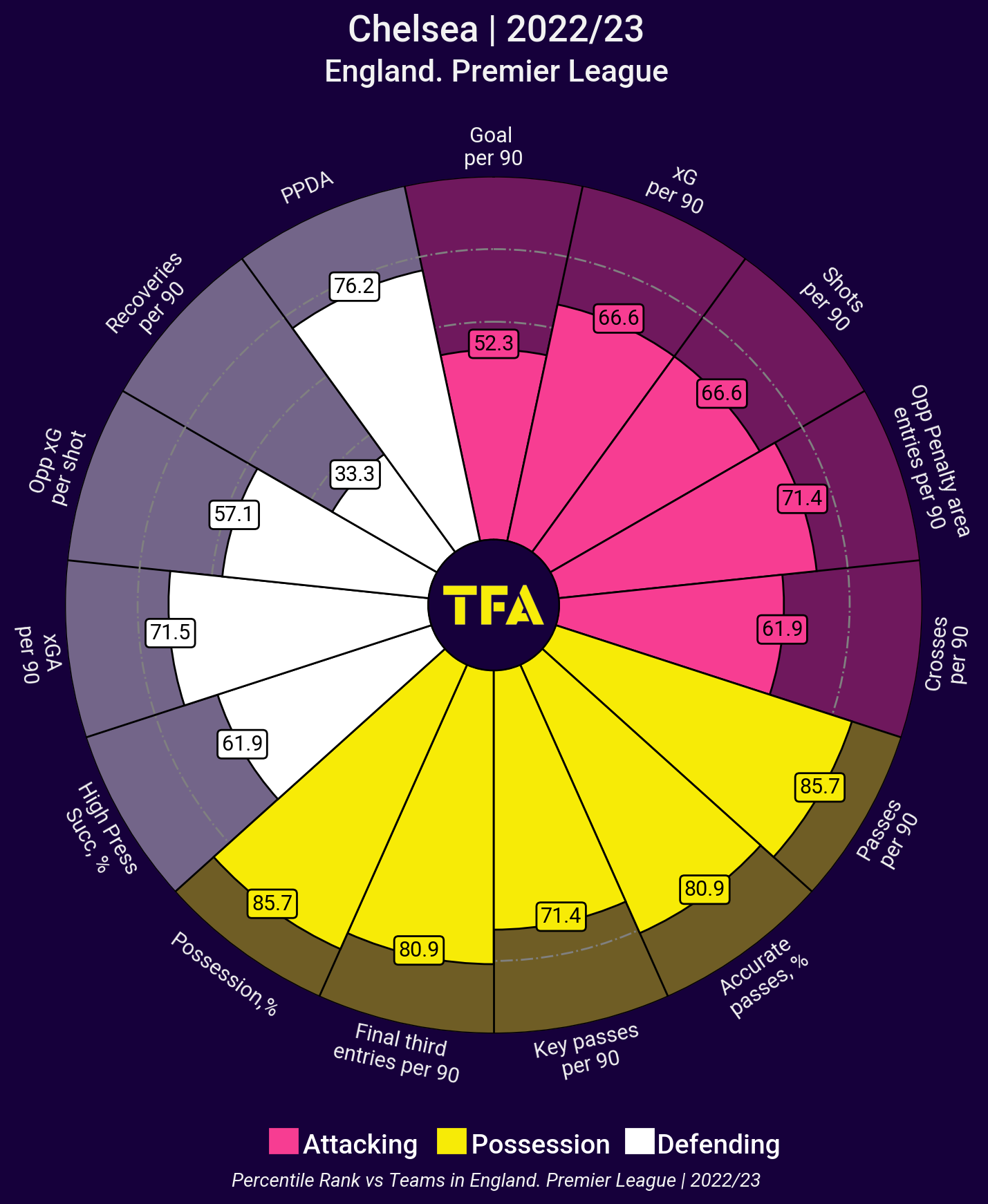 Chelsea have shown signs of improvement under the management of Graham Potter. The Blues have played three matches under the new manager in the English Premier League. They have scored seven goals and conceded only one. Earlier, Chelsea had scored eight goals in six games and conceded nine goals. Chelsea creates 32.8 positional attacks and attempts 11.2 shots per match with an accuracy rate of 34.7%. The above viz shows the percentile rank in comparison to other teams in the league. We can observe that Chelsea are ranked average in the attacking zones and have a decent rank when it comes to passing the ball. Chelsea have now started to get some positive results and will look to continue this form in the coming game.

How much has the defence improved? 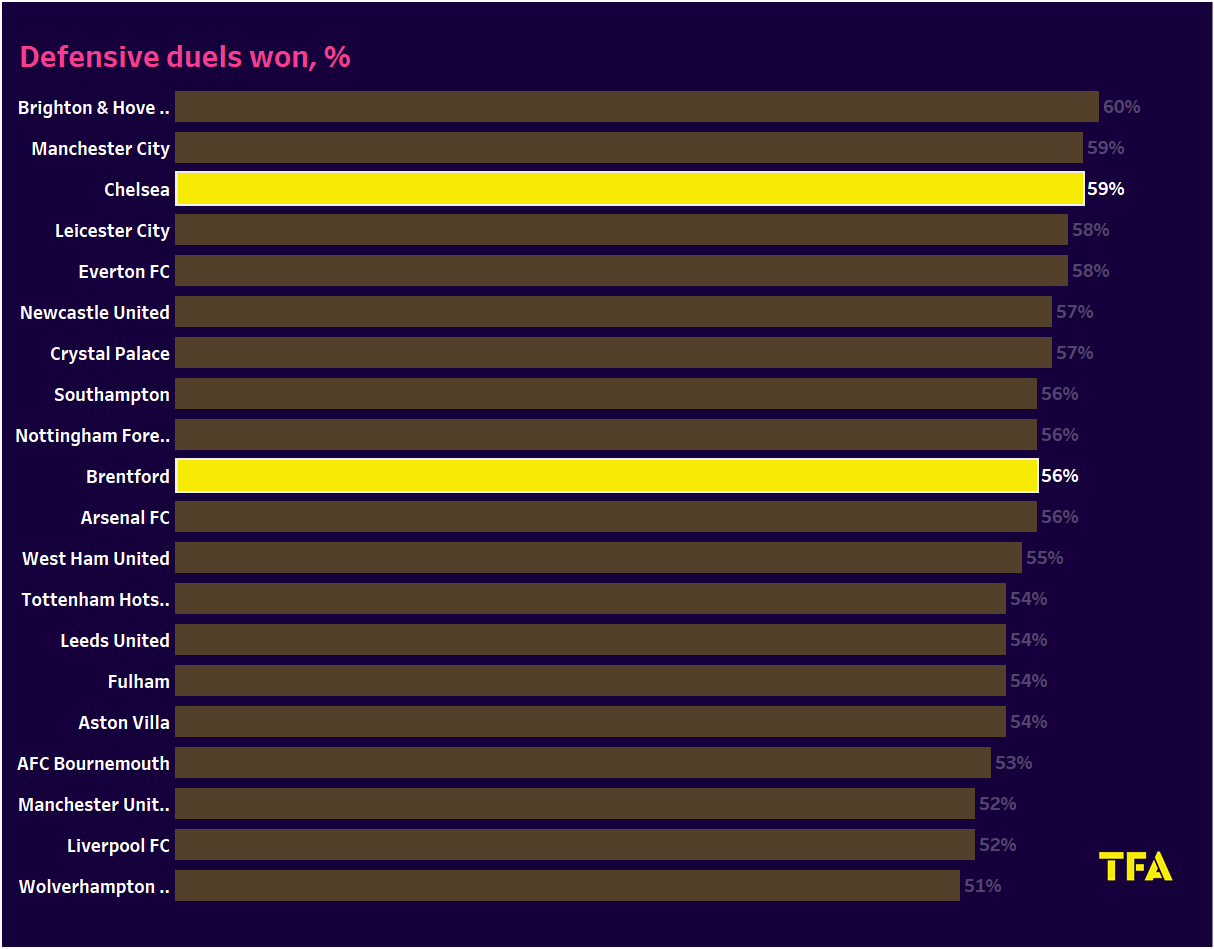 The Blues’ defence has seen a significant improvement. They only kept one clean sheet in six games under Thomas Tuchel, and that clean sheet came in the first match of the season. Graham Potter’s Chelsea has two clean sheets in three games. Overall, the team is highly ranked for winning defensive duels in the league. They will be eyeing a third clean sheet in as many matches. 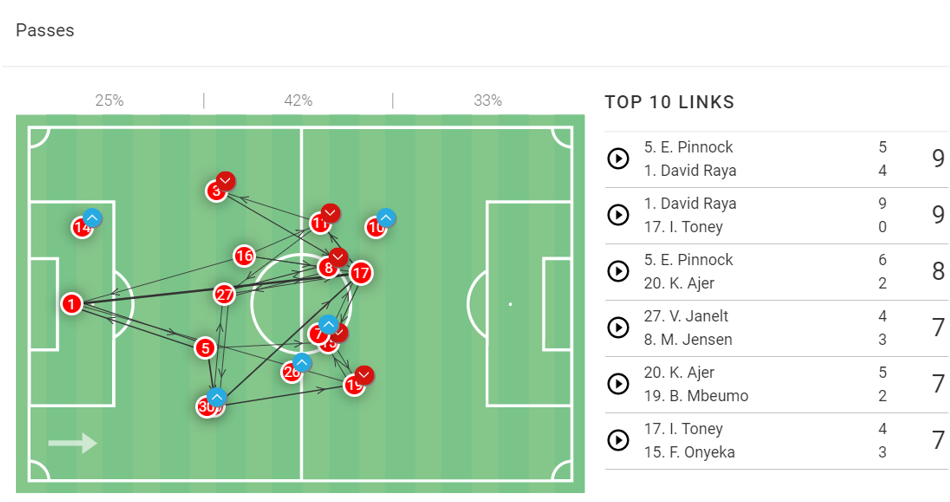 Brentford plays in a 3-5-2 formation. Ivan Toney leads the line for the Bees and is supported by Bryan Mbeumo. The above viz shows the average position of the players from the last match against Brighton. It looks like Brentford played with five defenders. Ivan Toney was their target man, and he operated more towards the left side. 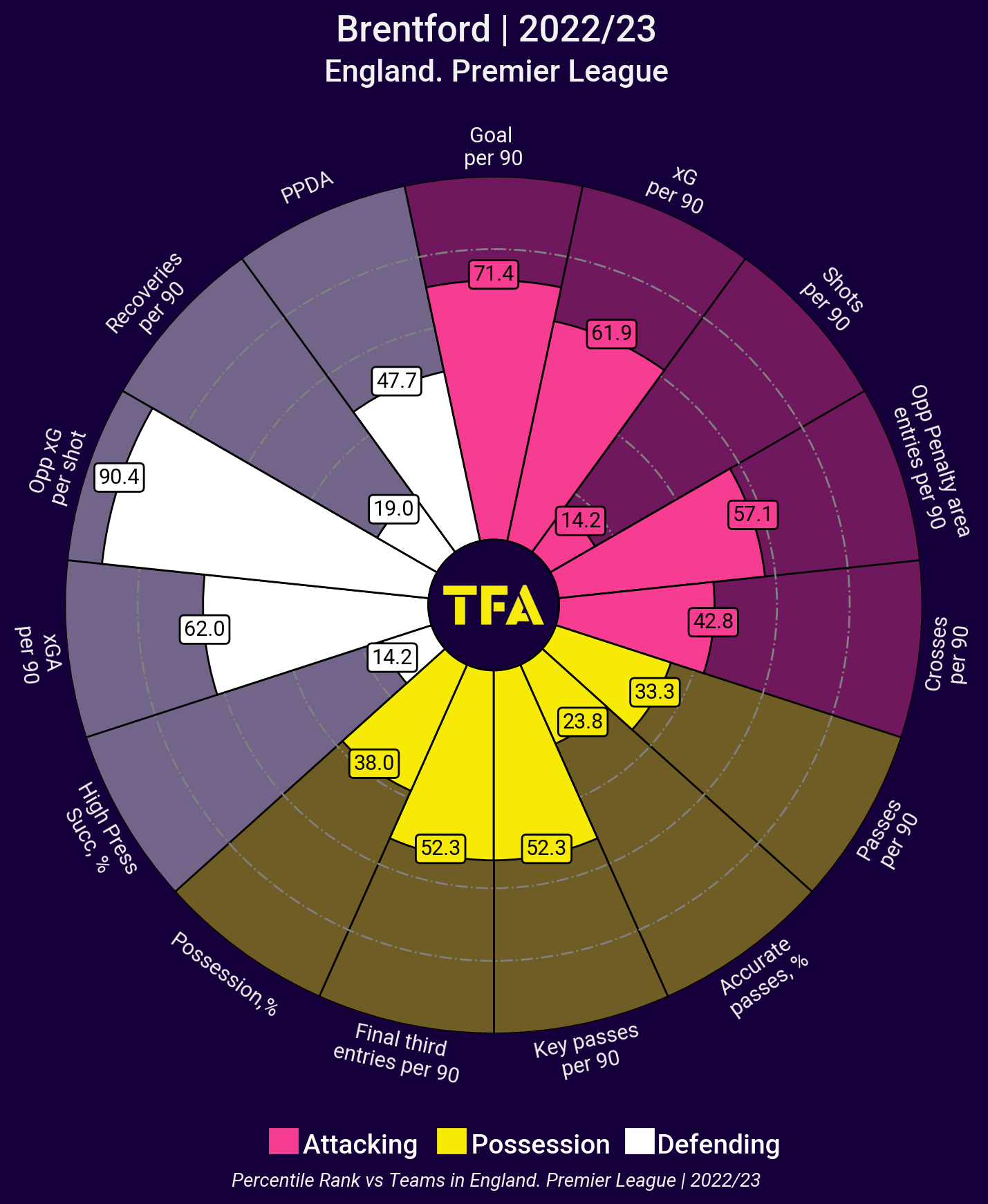 Brentford have managed to win some crucial games and have been clinical in their approach. The Bees are highly ranked for scoring goals this season, but their average percentile rank is a bit low in every department. However, they have been clinical with their finishing, which has contributed to their early season success. Brentford average only 25.2 positional attacks and ten shots with an accuracy rate of 40%. In the defensive department, Brentford have a high xGA rate and this can be a worry against this Chelsea side. They will make it difficult for the Blues to earn three points. 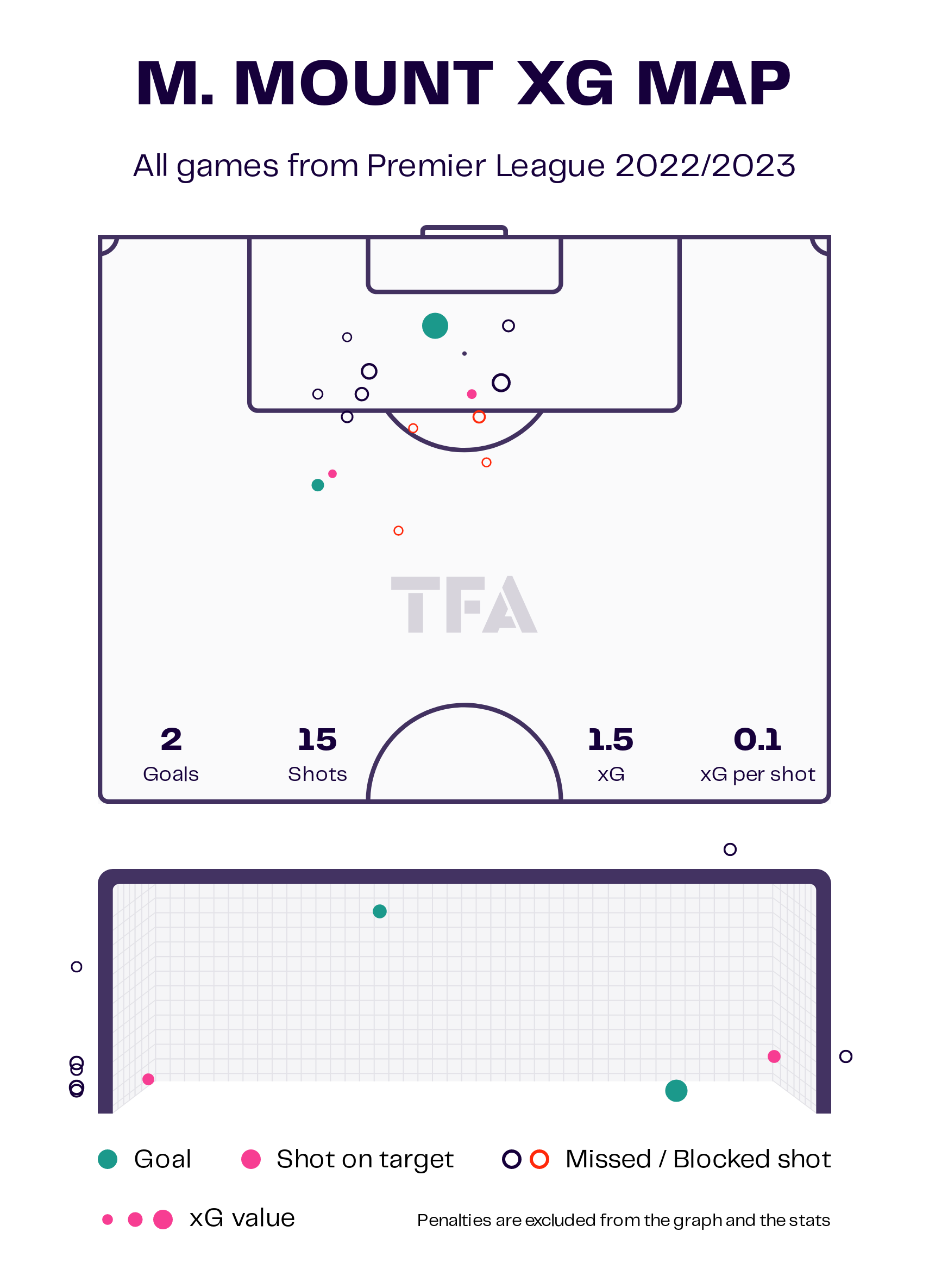 Mason Mount was on the score sheet for the first time in the English Premier League this season. The playmaker is finally finding his touch this season. With two assists and two goals to his name this season, the player will look to add more goal contributions. The above viz shows that the attacking midfielder likes to take his shots from the left side, and he will try one or two in this game. 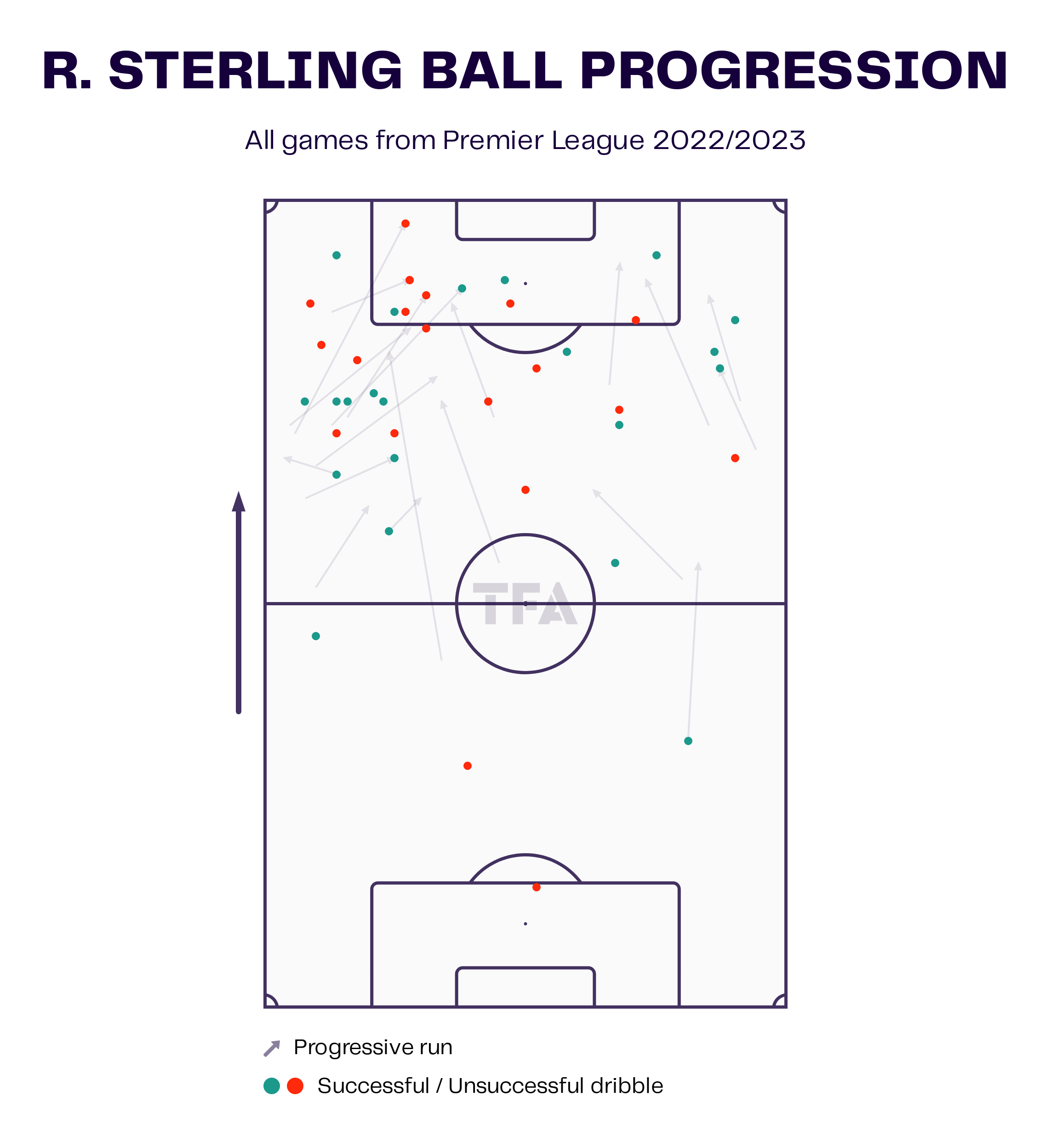 Raheem Sterling hasn’t scored a goal since August and he will be looking to break the drought by scoring against Brentford in this match. The winger carries a threat on the flanks and is capable enough to penetrate the opposition’s penalty box. When Sterling plays on the left side, he likes to cut inside and make more room for himself on the right side. While playing on the right side, he likes to run past the opposition defender and try to find a teammate inside the penalty box. Brentford will have to deal with Sterling’s pace and skills.

Aaron Hickey, Thomas Strakosha, Christian Norgaard, and Pontus Jannson will miss the match due to injuries.

Graham Potter could rest his senior centre-back Thiago Silva for this game. Cesar Azpilicueta and Kalidou Koulibaly could return to the starting 11. Wesley Fofana, N’Golo Kante, and Reece James will miss this trip.

Chelsea will look to make it five wins in five matches. They have momentum going into this game and are the favourites to take three points. However, Brentford won’t let them take the points easily and will try to cause an upset against the Blues.