On Tuesday night Tottenham Hotspur hosted Red Star Belgrade in a Champions League group match. With only one win in their last seven games in all competitions, it was a must-win game for Tottenham, who before this game had only collected one point from their first two fixtures in this year’s Champions League.

Red Star, on the other hand, are already sitting four points clear in their domestic league and were seeking to build on their win over Olympiacos in their previous Champions League game.

However, it wasn’t to be, and Tottenham put on an attacking display of the highest quality to win 5-0. There were two goals each for Harry Kane and Heung-Min Son, as well as one for Erik Lamela, with three of Tottenham’s goals coming before half-time.

This tactical analysis focuses on the tactics used by Mauricio Pochettino and Vladan Milojević in this Champions League group game fixture.

Toby Alderweireld, Danny Rose, and Harry Winks were the only players who featured in Tottenham’s last Champions League game, the 7-2 drubbing by Bayern Munich, to lose their place for this fixture.

However, Pochettino avoided using a midfield diamond again, instead fielding a 4-2-3-1 with Vertonghen partnering Sanchez at the heart of defence, flanked by both Ben Davies and Serge Aurier. Tanguy Ndombele partnered Moussa Sissoko in midfield, as Dele Alli sat in front of them in the 10 role, with Harry Kane as the lone striker. Son and Erik Lamela played on the wings, with both given license to move inside and play narrow. 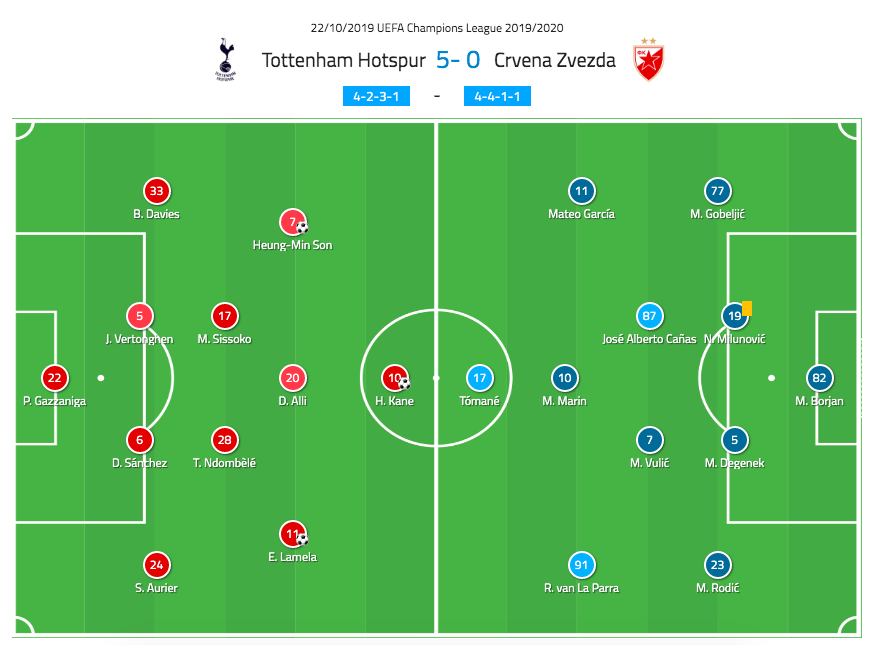 To read the full tactical analysis of this match- Click here

If you love tactical analysis, then you’ll love the digital magazines from totalfootballanalysis.com – a guaranteed 100+ pages of pure tactical analysis covering topics from the Premier League, Serie A, La Liga, Bundesliga and many, many more. Buy your copy of the October issue for just ₤4.99 here

Who is the Premier League’s top playmaker right now?