Leicester City are reportedly considering a move for Club Brugge forward Charles De Ketelaere. The highly-rated Belgian striker has been in fine form this season in the Belgian Pro League. The 21-year-old was linked with a move to Leicester in the January transfer window; however, a deal could not materialize. De Ketelaere’s impressive form this season earned him a call-up to the Belgian national team. The striker recently started in his second successive match in a 2-2 draw against Ireland.

The young striker has been attracting interest from various clubs in Europe, including Napoli, AC Milan, and Newcastle. Since making his debut in the first-team, the 21-year-old has become a first-team regular, making 111 appearances across all competitions. This season, De Ketelaere has made 41 total appearances, scoring 17 goals and registering nine assists.

Over the years, the Foxes have carved out a reputation for signing young talents with impressive potential. Continuing along the same lines, a move for De Ketelaere in the summer would make sense. In the last few seasons, we have seen many young players given the opportunity to step up at the King Power Stadium. The likes of Luke Thomas, James Justin, and more recently, Kiernan Dewsbury-Hall have successfully made their mark in Rodgers’ starting lineup. A move to Leicester could prove to be instrumental in De Ketelaere’s development. According to reports from Belgium in January, the 21-year-old was an important target for the Foxes. The reports also claimed that Leicester were looking to get ahead of their rivals to secure the signature of the Belgian forward.

Let’s take a look at some stats to gauge the performances and strengths of the young forward. 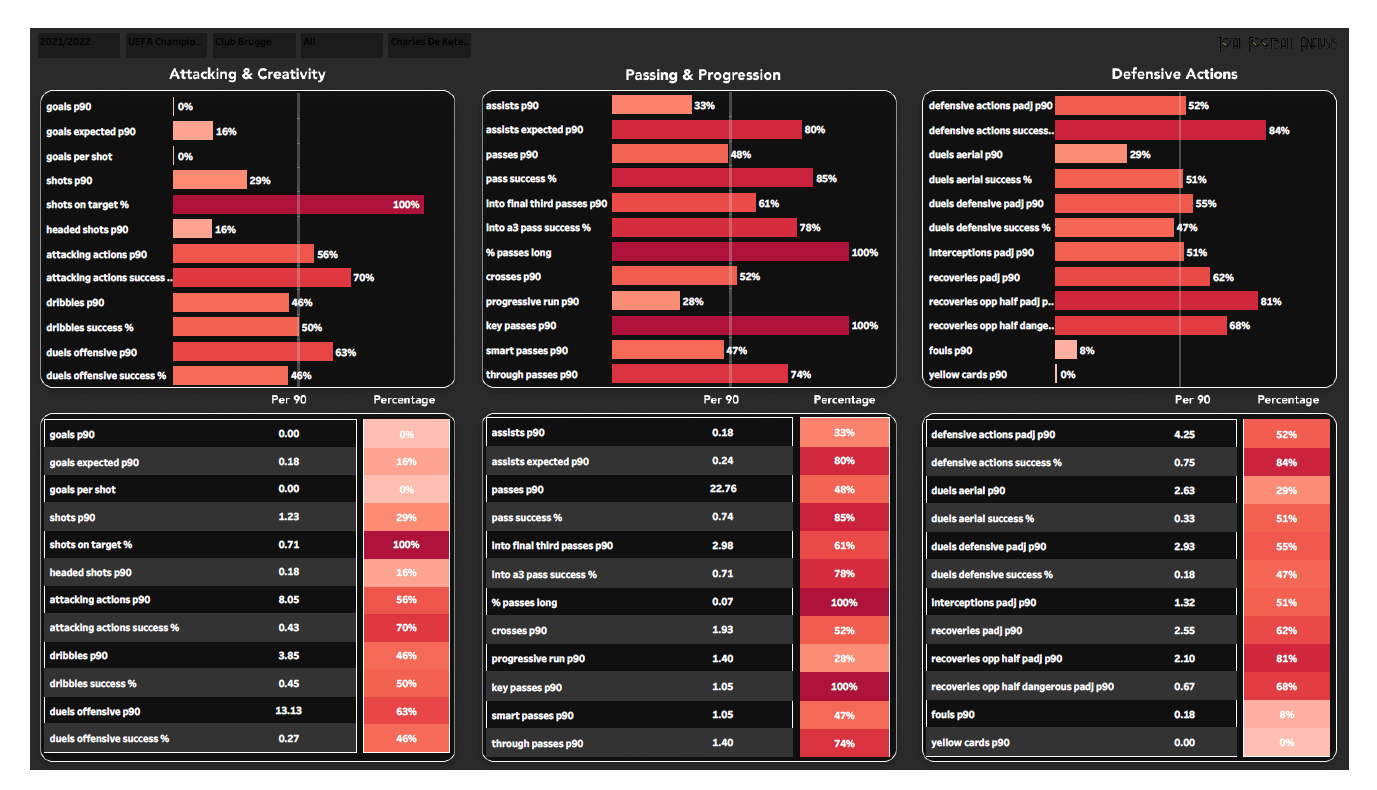 In the above viz, we can see De Ketelaere’s overall stats in the Champions League. In terms of passing & progression, the Belgian has excelled at xA per 90, into the attacking third pass success rate, and key passes per 90. The 21-year-old is positionally versatile and can be deployed as a left-winger, centre-forward, second-striker, and central-midfielder. De Ketalaere is a decent creator both from open play and from set-pieces. The youngster is a quick and agile player and does not shy away from exerting his physicality when defending from the front. 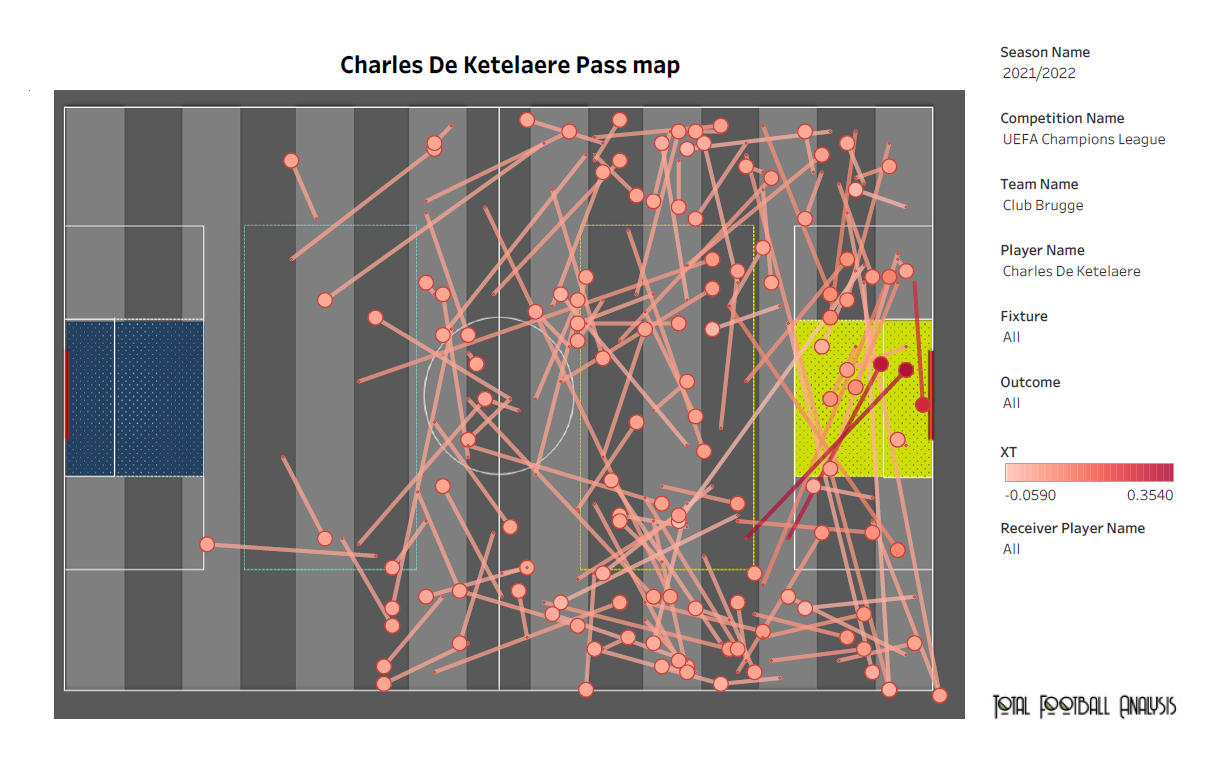 The above viz displays the locations on the pitch from where De Ketelaere has delivered his passes. The 21-year-old is an impressive progressor of the ball, and he is adept at passing into the final third. De Ketelaere looks to get in between the lines, make deep, incisive runs, and combine with his other attacking teammates to create chances. He demonstrates a brilliant understanding of space and often makes the right run off the ball to receive in threatening areas, creating space for his teammates to move. 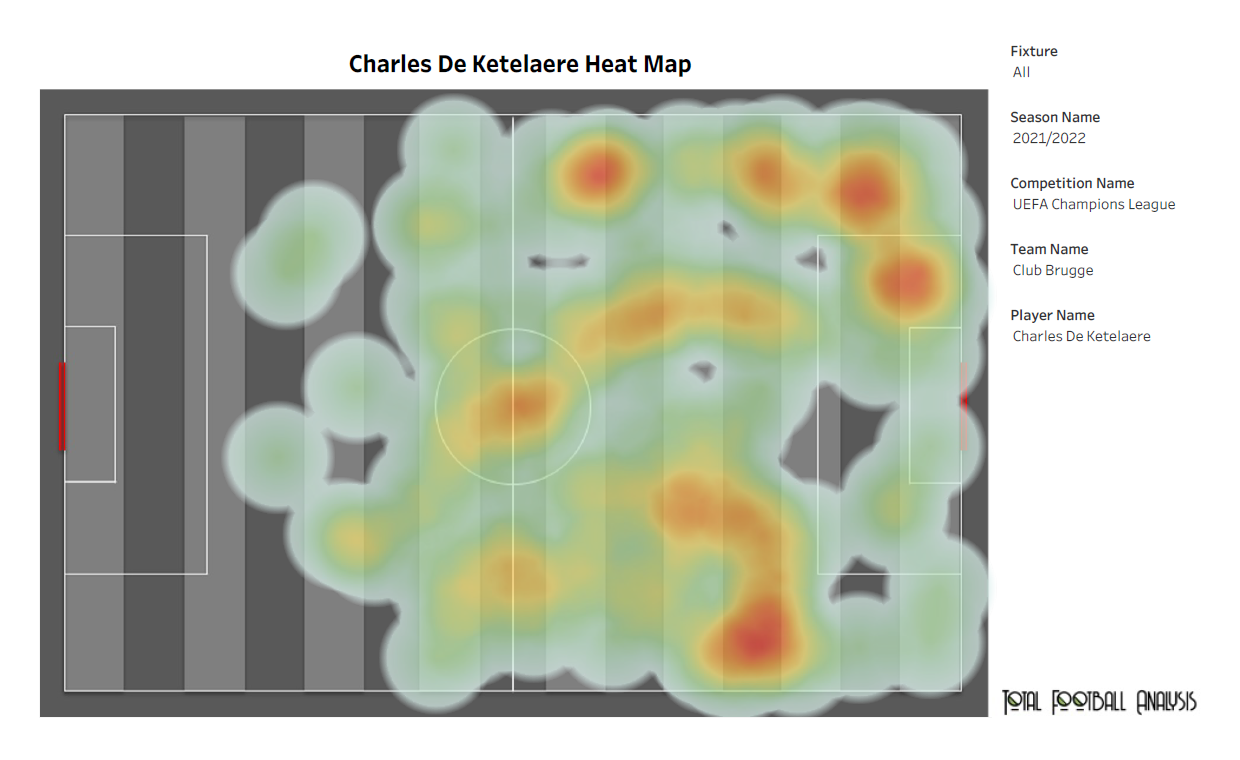 We can see De Ketelaere’s movement and area of activity on the pitch in the above viz. It is evident from his heat map above that De Ketelaere spends his time all over the opponent’s half. The 21-year-old is known for his off-the-ball movement, and he is capable of finding space in between the lines and behind the opposition defense. He can also drop deep or to the left flank to receive the ball before making runs or passes into the box.

De Ketelaere is an impressive and versatile young prospect. The 21-year-old is having a brilliant season with Club Brugge and looks ready to take the next step in his career. A move to the King Power Stadium could prove to be influential in the development of the youngster.