Newcastle United spent a huge amount in January 2019 to sign Miguel Almiron from Atlanta United. The Paraguayan became the most expensive player to get signed from any MLS club, and this was kind of a surprise move. It was a gamble because players featured in leagues like MLS tend to struggle in big leagues like the English Premier League.

The same thing happened with Almiron, and he struggled to make an impact in the Magpies’ lineup. Before the start of this season, he made 123 appearances and managed to make 19 goal-scoring contributions. The current season also saw a slow start, as Almiron only managed one goal in the first seven matches. However, the player has shown massive improvements since then and has made some crucial contributions that have helped his side stay in the top four.

We now look at some of the stats of the Paraguayan international. 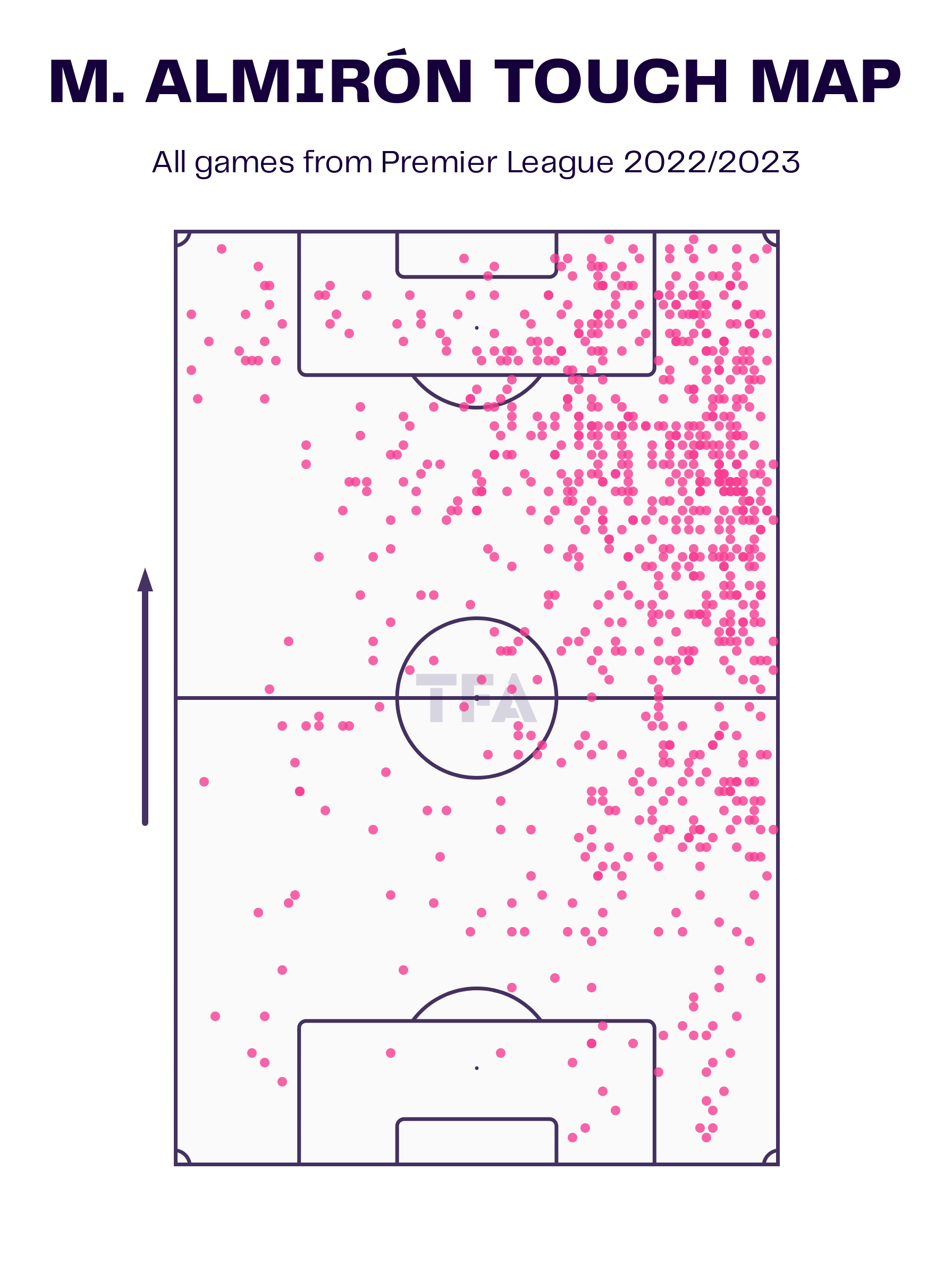 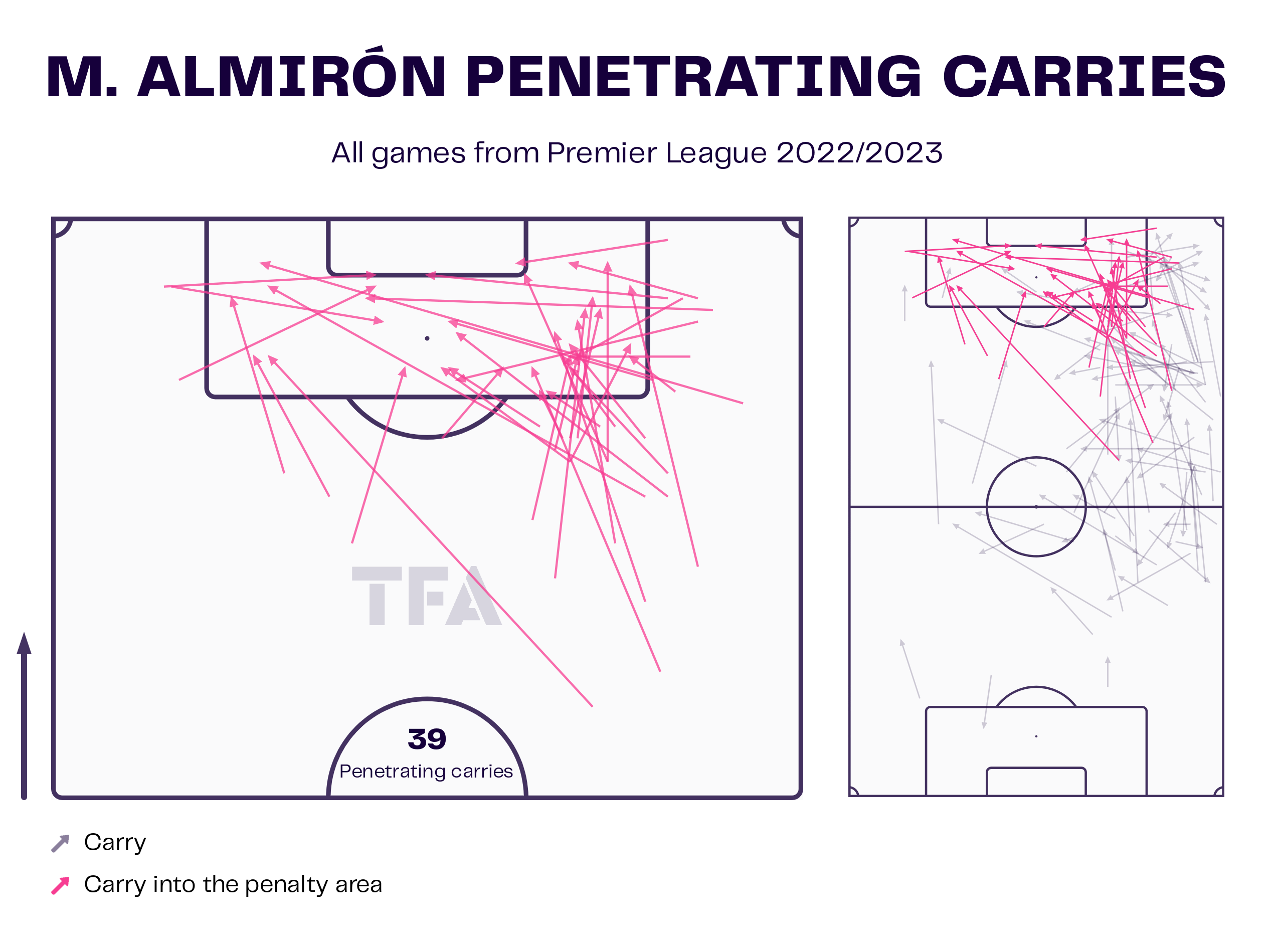 Miguel Almiron plays as a right winger or as a right-attacking midfielder for the team. He is a left-footed player who is known more for scoring goals. Since Eddie Howe’s arrival, there has been a significant improvement in the squad. Miguel Almiron has also adapted to his game plan and has appeared in all 14 English Premier League matches this season. The above touch map shows the position that the player has taken this season. We can observe that Almiron likes to stretch the play and has often taken touches in wide areas. The box penetration carries, on the other hand, have not been made from such a wide position. The attacker averages 4.32 touches inside the penalty box. 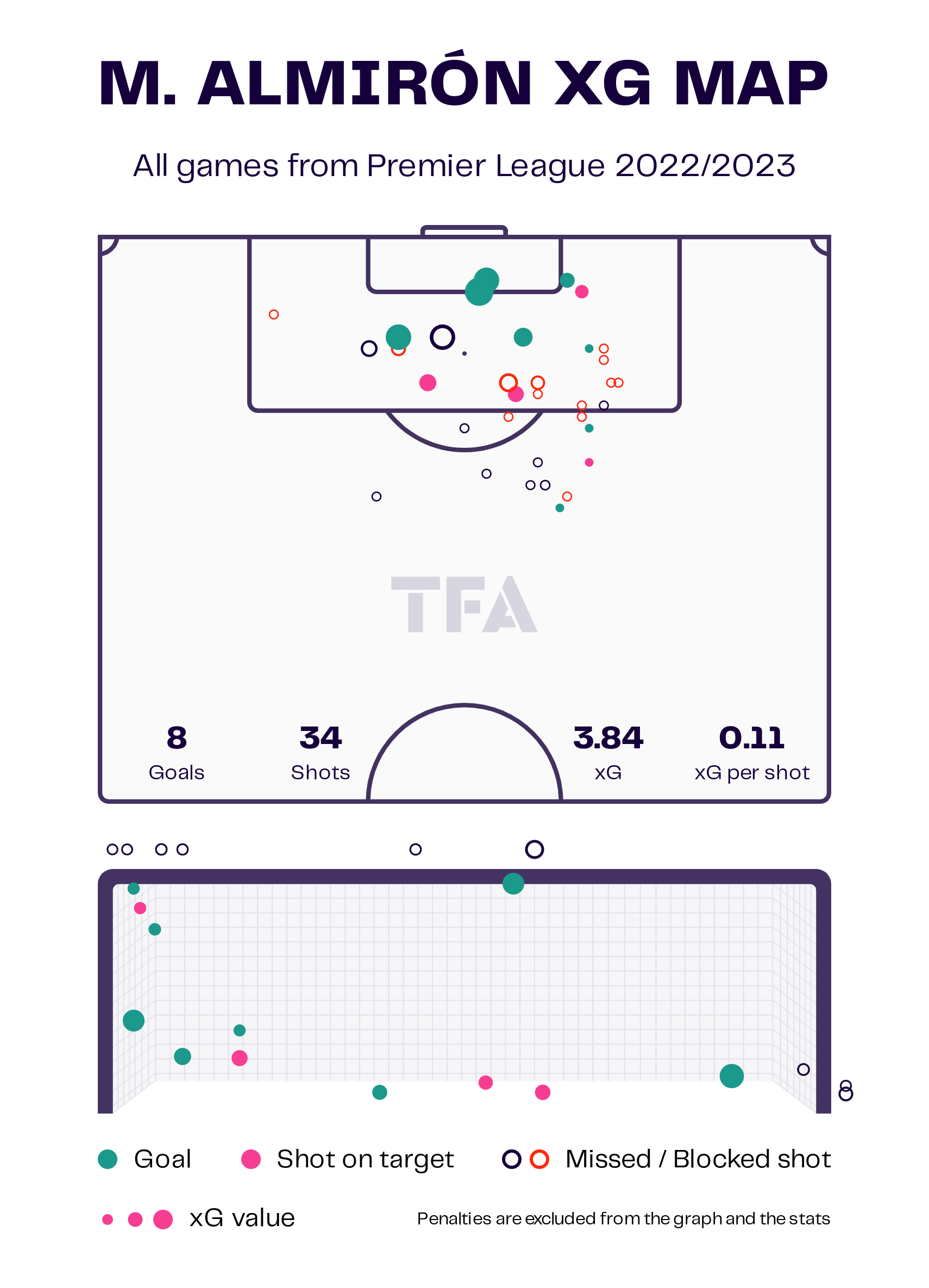 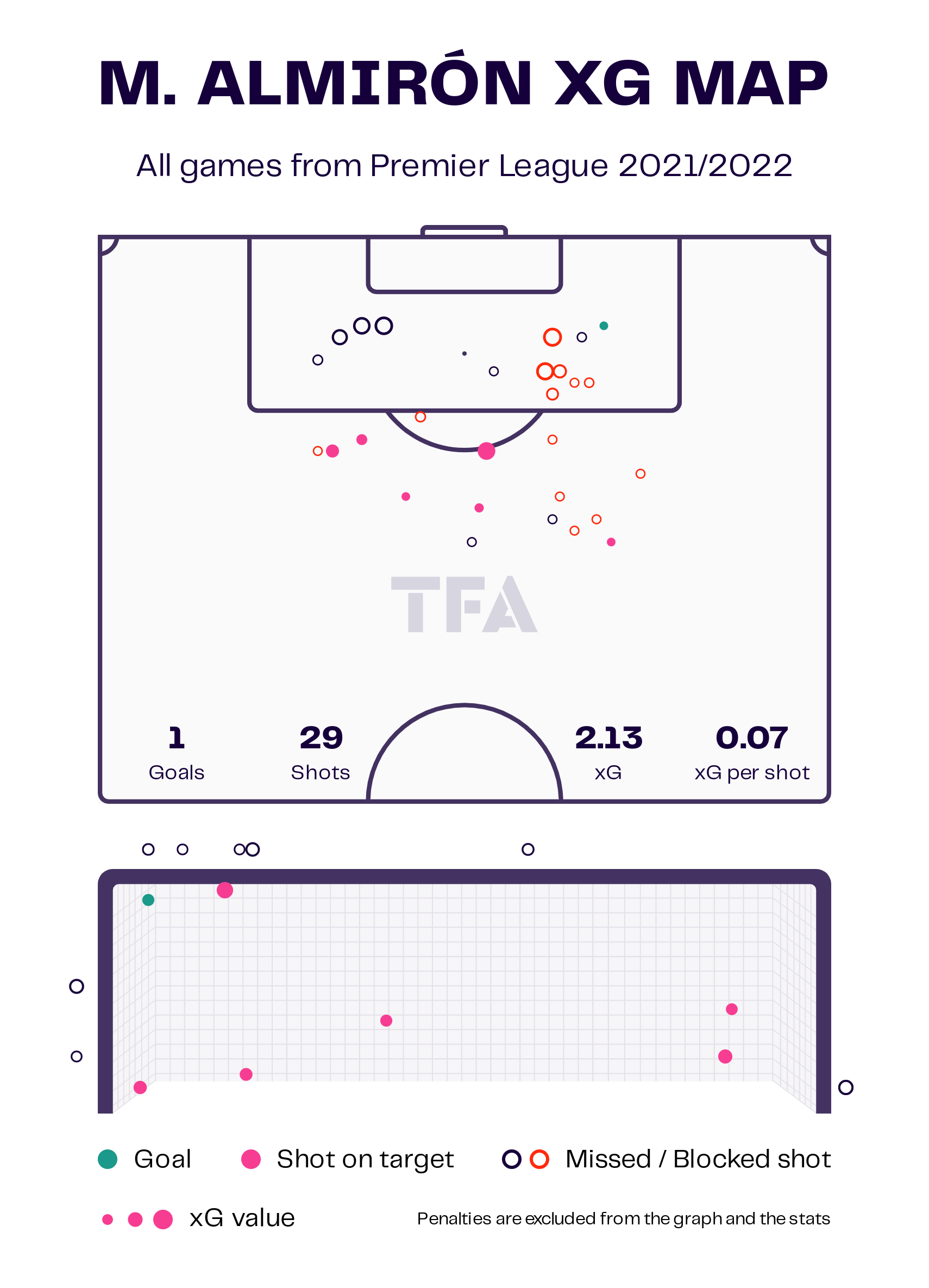 After just managing one goal in the first seven matches, Miguel Almiron came into the form of his life. The 28-year-old has gone on to score seven goals in the last seven games. These goals have come at crucial times, and Newcastle United are unbeaten in these matches. During this period, Almiron attempted 22 shots, and nine were on target. Earlier, he only attempted ten shots and had three on target. When compared to his stats from last season, Almiron played in 30 games and only scored once. The spot map shows that Almiron was inaccurate last season and was unable to take shots from inside the penalty box. This season, there has been a significant improvement in his goal-scoring record. 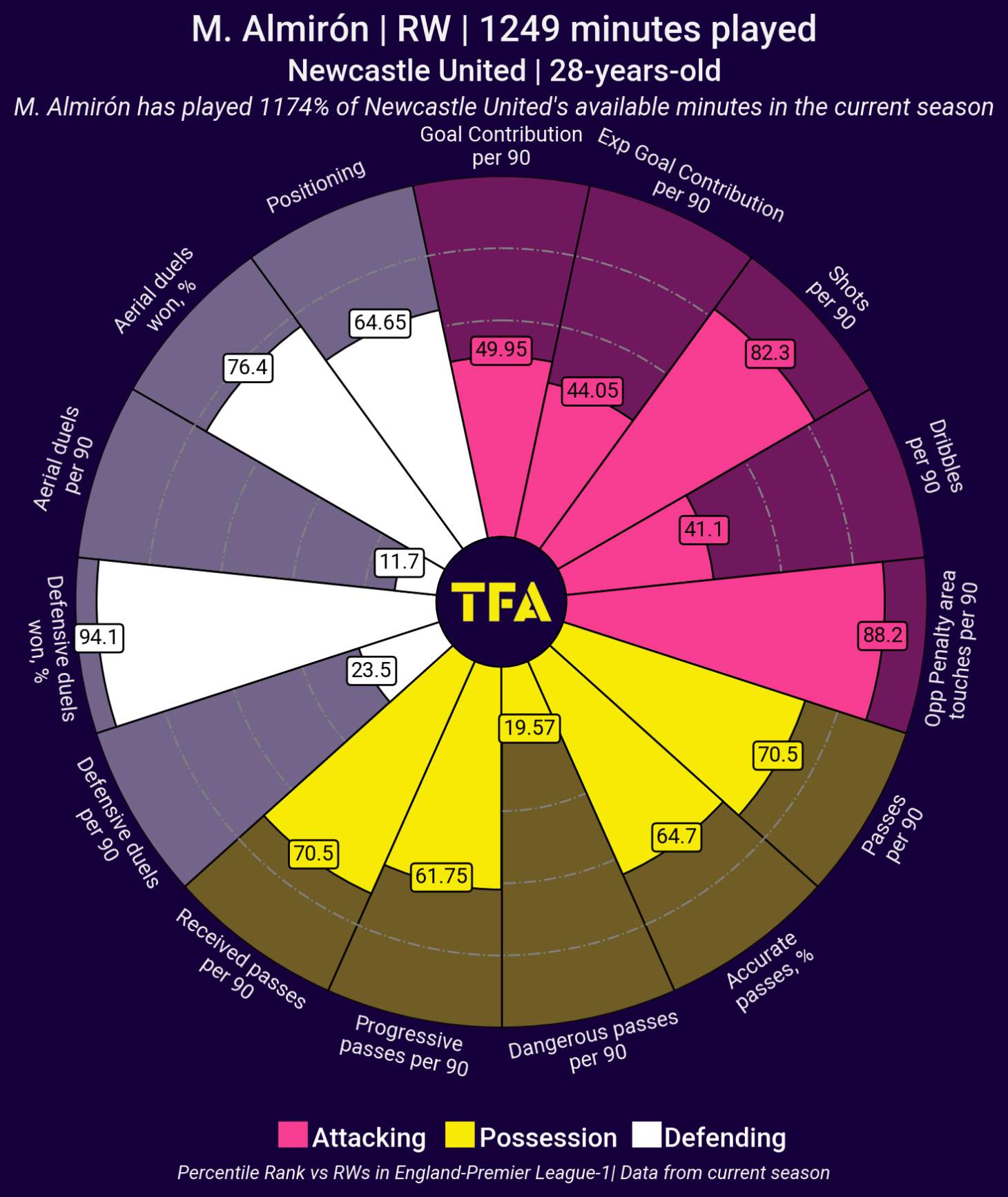 The above viz shows the percentile rank of the player in defensive, offensive, and passing stats in comparison to other right-wingers in the English Premier League. We can observe that Almiron is ranked highly for taking shots and touching the ball inside the penalty box. His passing stats have been decent, and he is ranked above average. One of the areas where Almiron has also contributed in winning duels. 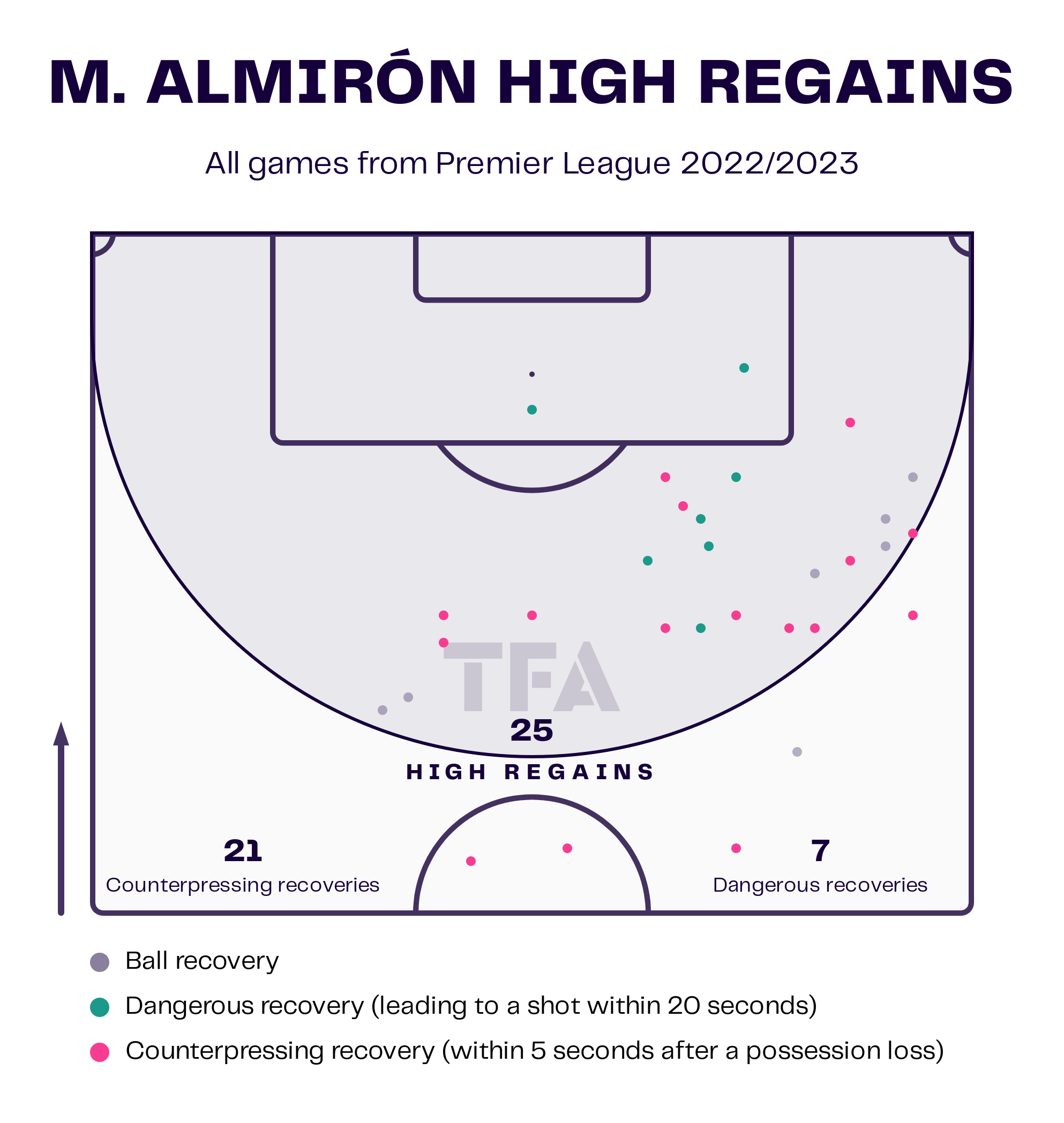 Miguel Almiron’s recent form has lifted the confidence of the Magpies. They are sitting third in the league table and will look to go into the international break with the same momentum. Almiron is justifying his price tag and has been a key member in his team’s unbeaten run. He will look to continue his rich run of form and enter double figures for the first time in a Newcastle United shirt.