One of the names that has emerged in recent times is Dutch sensation Cody Gakpo. The 23-year-old PSV star has been a sensation at the league level as well as at the international level. These performances have gained the interest of many big clubs in Europe, especially in the English Premier League. The likes of Arsenal and Manchester United are battling for the signing of this key player. Cody Gakpo has scored goals and also given some crucial assists. This has caught the eye of the other clubs, and they are likely to make a move for him in the coming transfer window. Manchester United need a striker after the departure of Cristiano Ronaldo. Arsenal are also eyeing a player who can strengthen their chances of winning the English Premier League. We now look at some of the stats that show why these EPL giants have shown their interest in the young Dutchman. 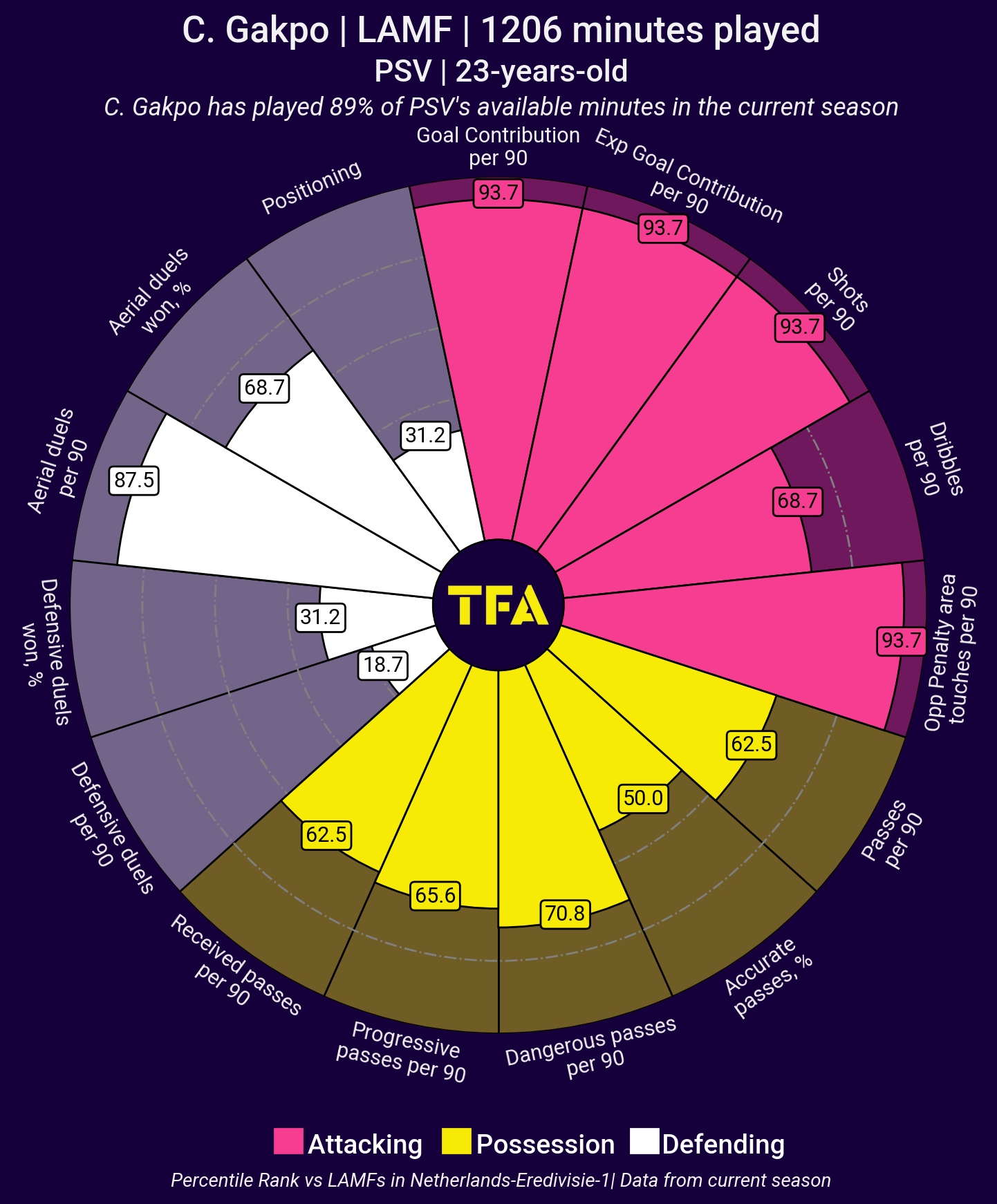 Cody Gakpo has been a regular part of the PSV side. The player attacks mostly from the left side. The Dutchman has played 14 matches in the Dutch Eredivisie this season and has gone on to score nine goals along with 12 assists. The above viz shows the stats of the player in comparison to the other players featured as left-attacking midfielders. It can be observed that Gakpo has dominated the attacking statistics. Gakpo is the leading assist provider as well as the leading goalscorer in the Dutch top division. Another area where Gakpo has been dominant is in winning aerial duels. 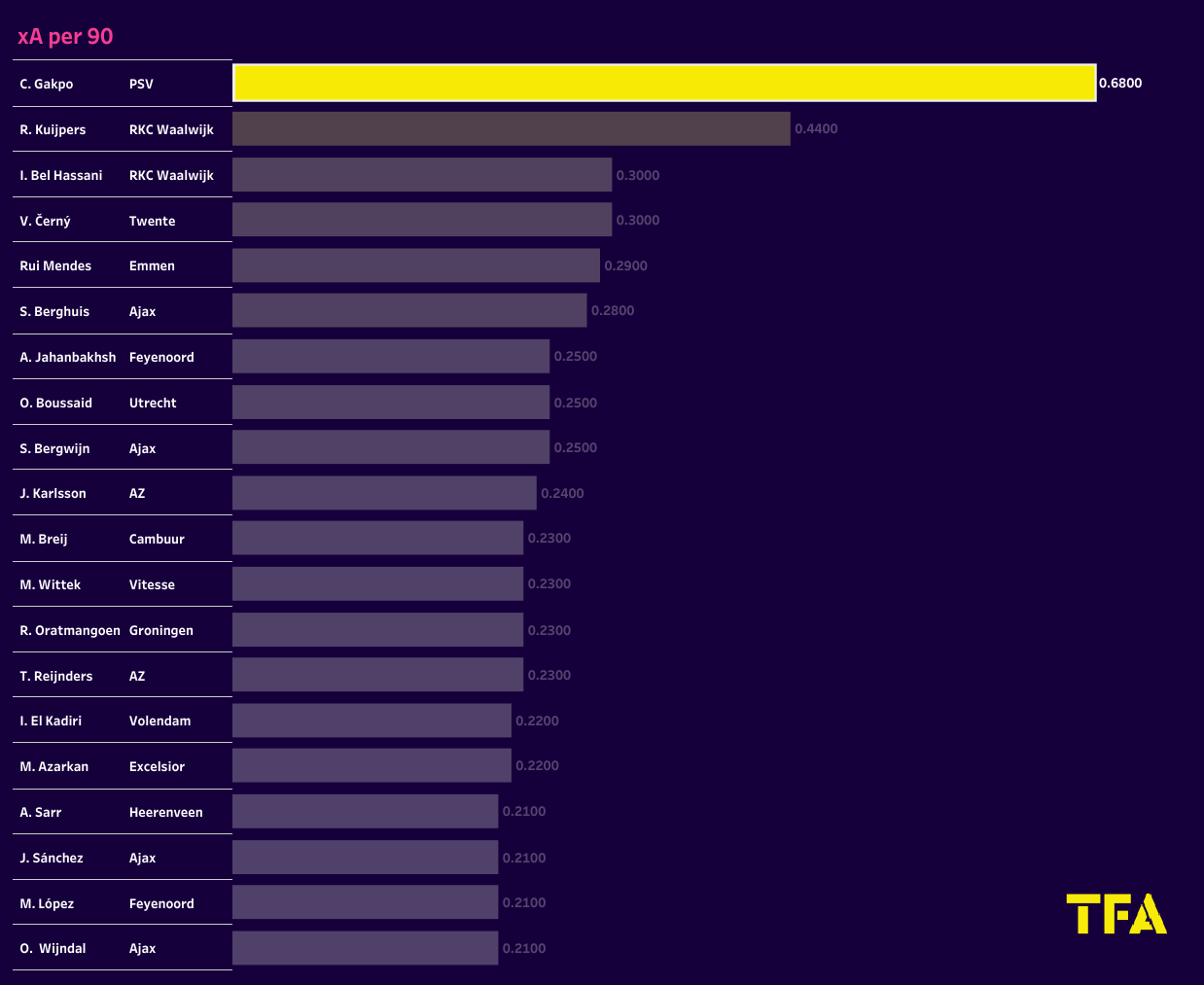 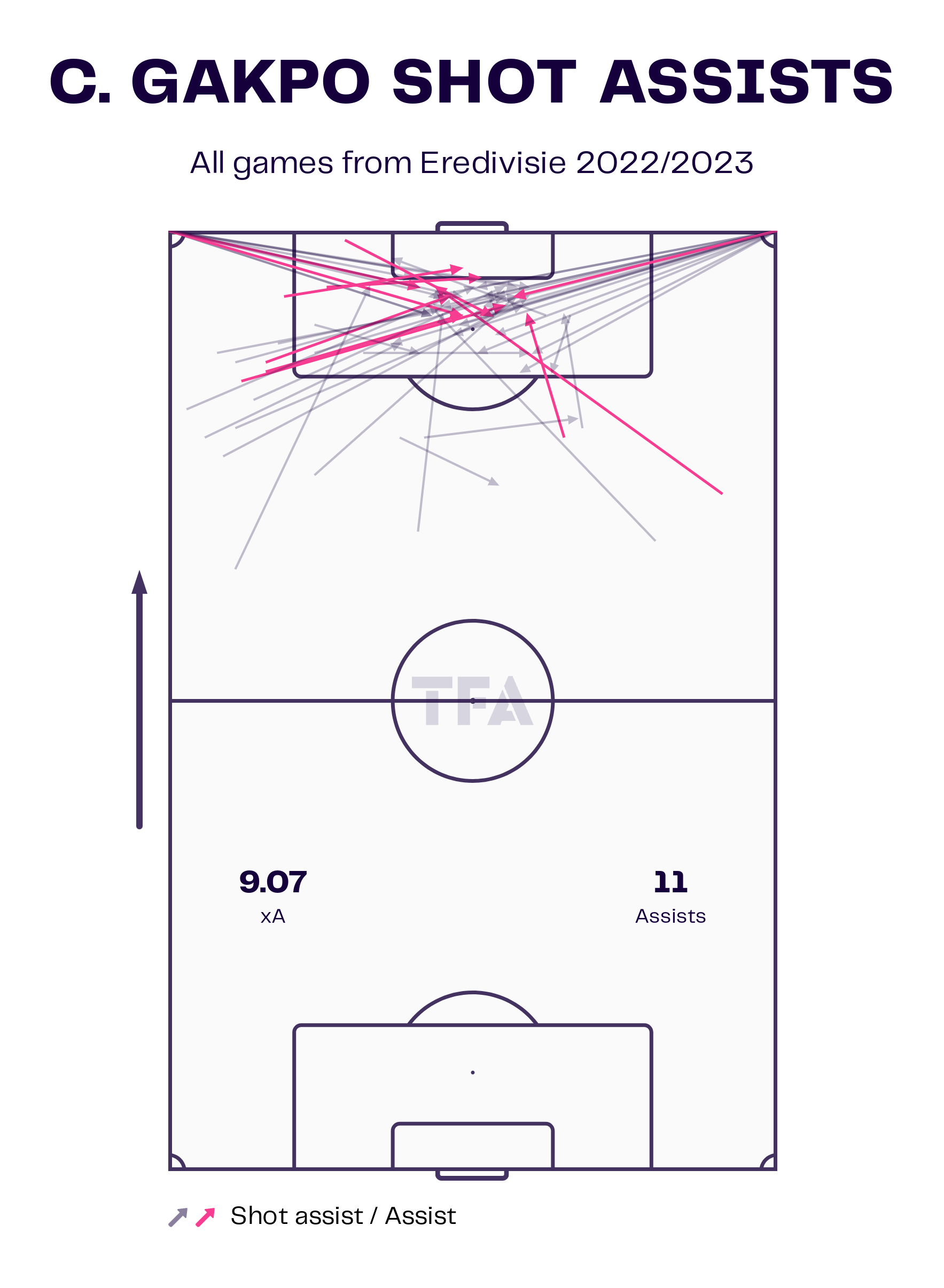 When it comes to providing assists, Cody Gakpo hasn’t failed to deliver this season. The most creative player in the Dutch Eredivisie has 12 assists to his name. The benchmarking above shows that Gakpo is ranked at the top for xA per 90 minutes in the league. This shows that the forward creates a lot of chances and is miles ahead of the player in the second position. Cody Gakpo averages 26.96 passes per 90 minutes and has an accuracy rate of 76.9%. These include 4.02 passes to the penalty area per 90 minutes with a 59.2% accuracy rate. The shot assist viz above shows that the player is also active on corner duty. Most of the assists have come from passes attempted on the edge of the 6-yard box. These passes to dangerous areas have been threatening and resulted in 11 goals. 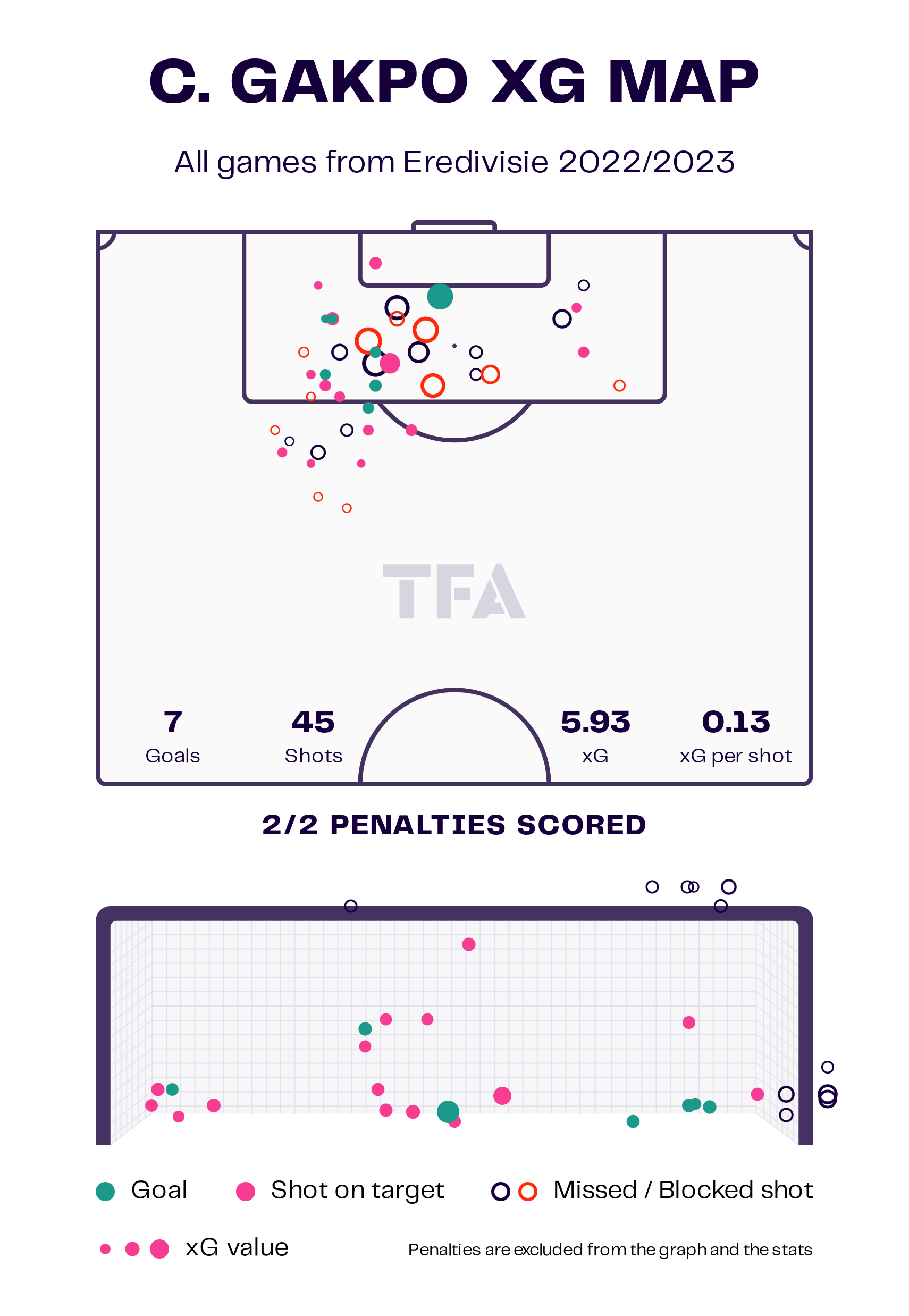 The Dutchman has added nine goals to his team’s tally, and these all-round performances have made him one of the hottest properties in Europe. Averaging 3.4 shots per 90 minutes, the player has an accuracy rate of 50%. The above viz shows the shot map of the forwards in the Dutch Eredivisie. Cody Gakpo has taken most of the shots from the left side, with the majority coming from inside the penalty box. The shots are targeted to the left of the keeper or toward the centre. Gakpo is also the penalty taker for the team and has netted two penalties with a 100% record. 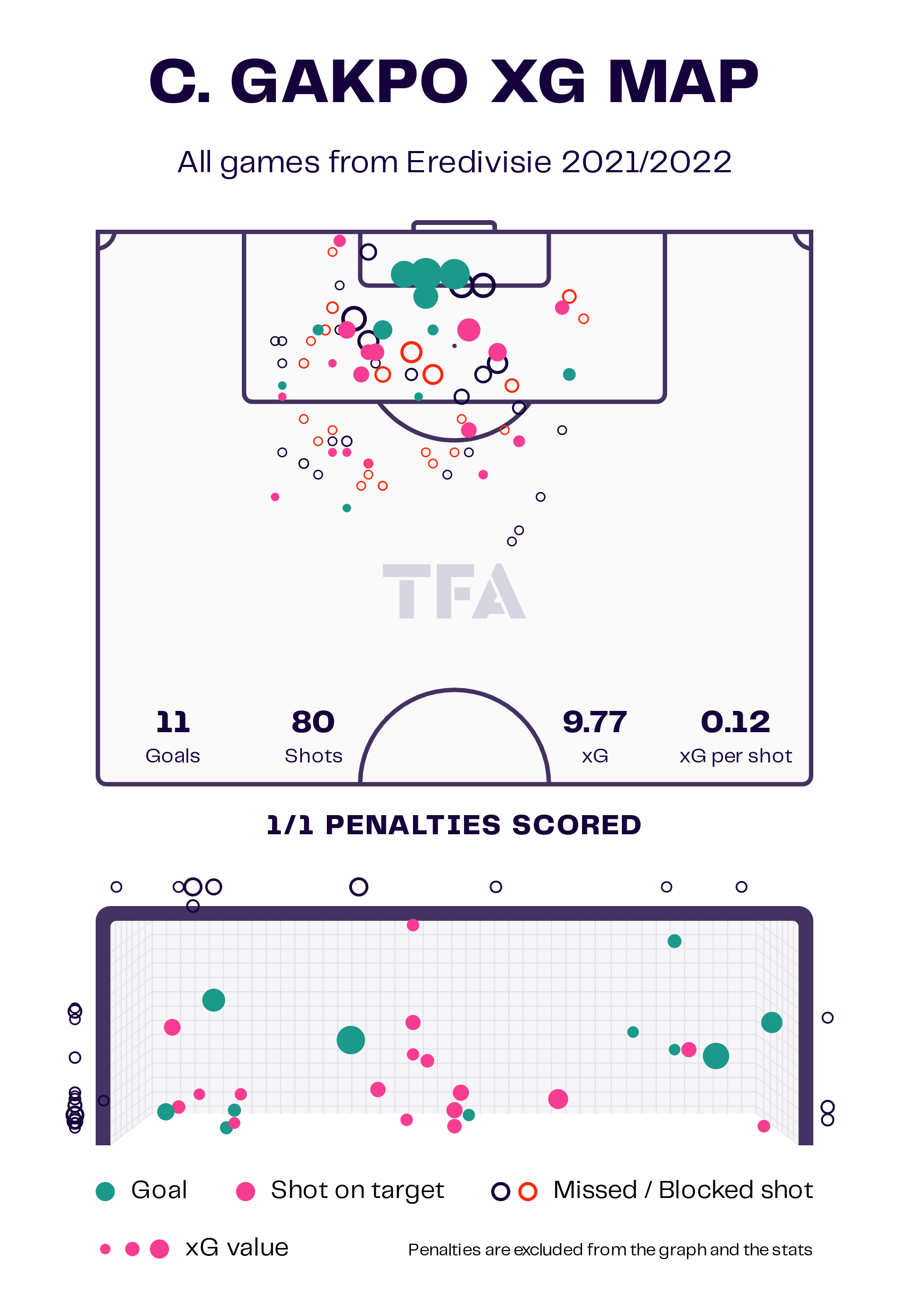 Cody Gakpo has shown a lot of improvement from last season. The most notable will be his contributions on the attacking side. Last season, in 27 league appearances, Gakpo scored and provided 12 assists each. The shots per 90 minutes average 3.56 with an accuracy rate of 35.8%. He had 64 shot assists in the last season and already has 63 in the current season. The player has improved significantly and has become a big threat for the Dutch side.

Who would Gakpo replace?

Manchester United are looking for a replacement for Cristiano Ronaldo. They were behind Gakpo at the start of the season but were unable to get the player. Arsenal, on the other hand, will be looking to add more options to their young attack. Gabriel Martinelli plays on the left side for Arsenal and might have to sacrifice his position if Gakpo makes a move to North London. 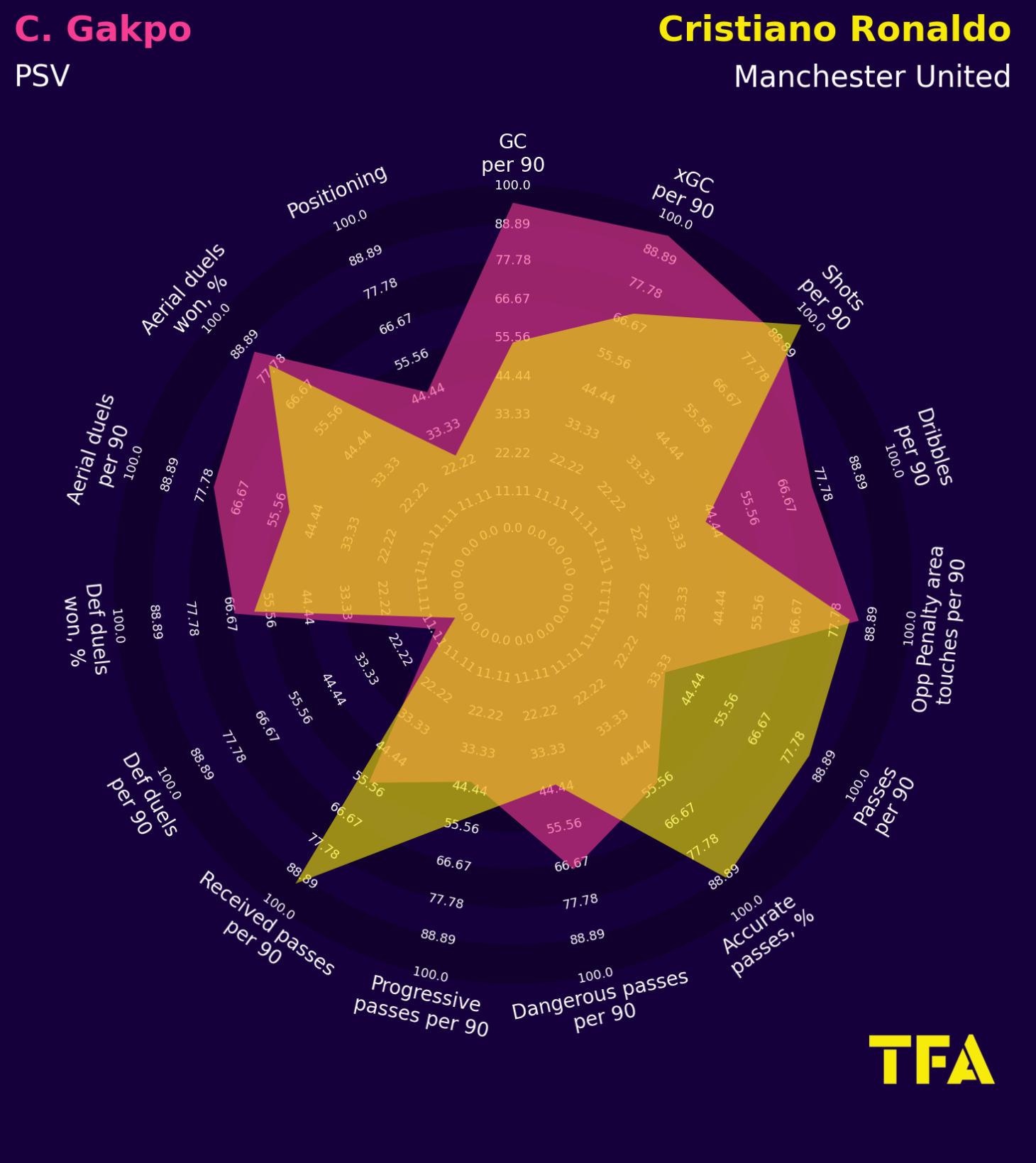 Cristiano Ronaldo had a disappointing end to his Manchester United legacy. The Portuguese made 14 appearances and only started in four of these matches. He scored one goal in the English Premier League. The above viz shows the comparison between the two players in their respective leagues. It can be observed that Gakpo has played better than the veteran and has better stats than him in most of the data points mentioned above. 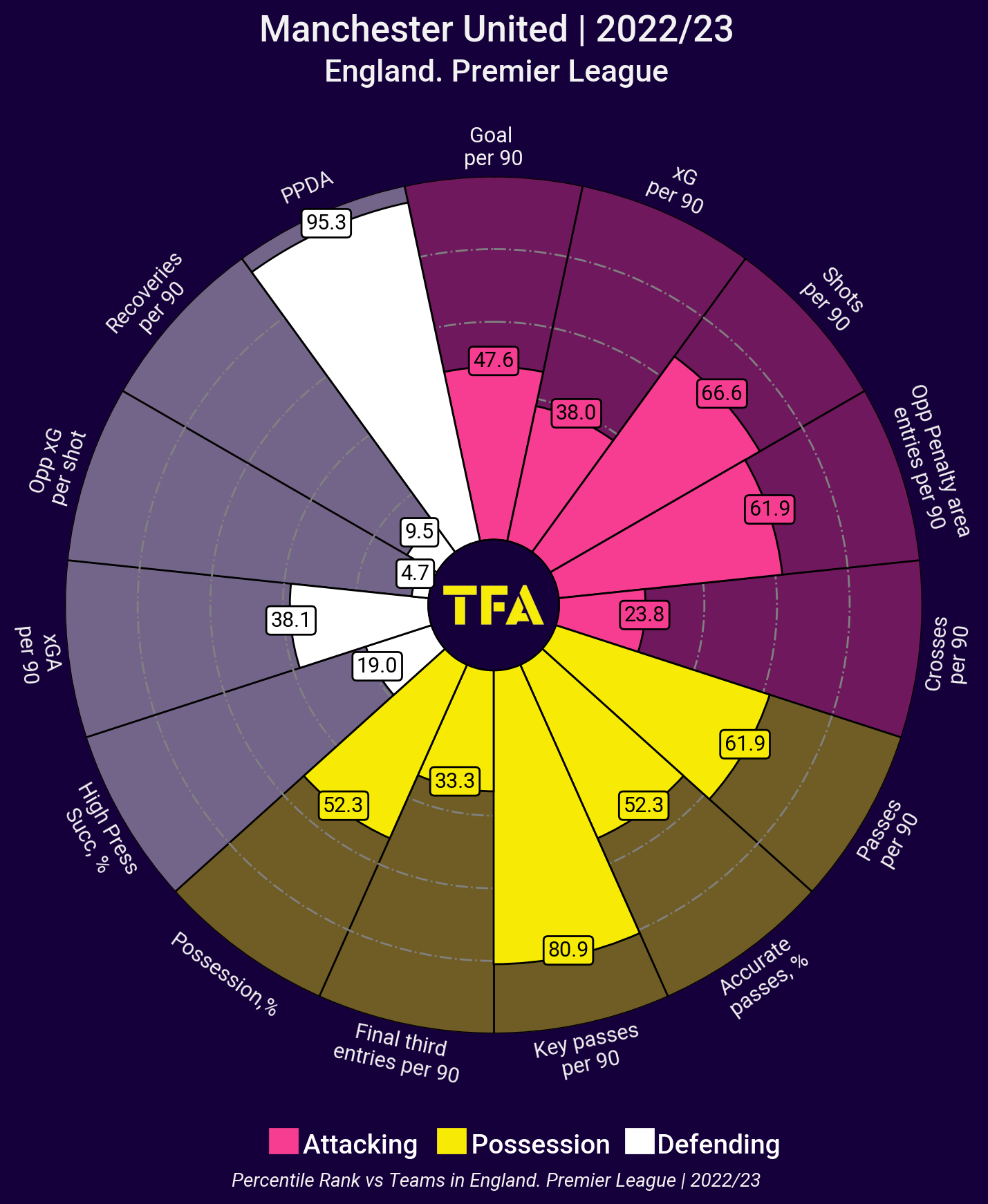 Manchester United have struggled to create chances this season. They have scored the fewest goals amongst all the teams ranked in the top six positions. The above pizza chart shows that the Red Devils have a low percentile rank in the attacking department. Cody Gakpo’s inclusion could help them create more chances and return to their glory days. 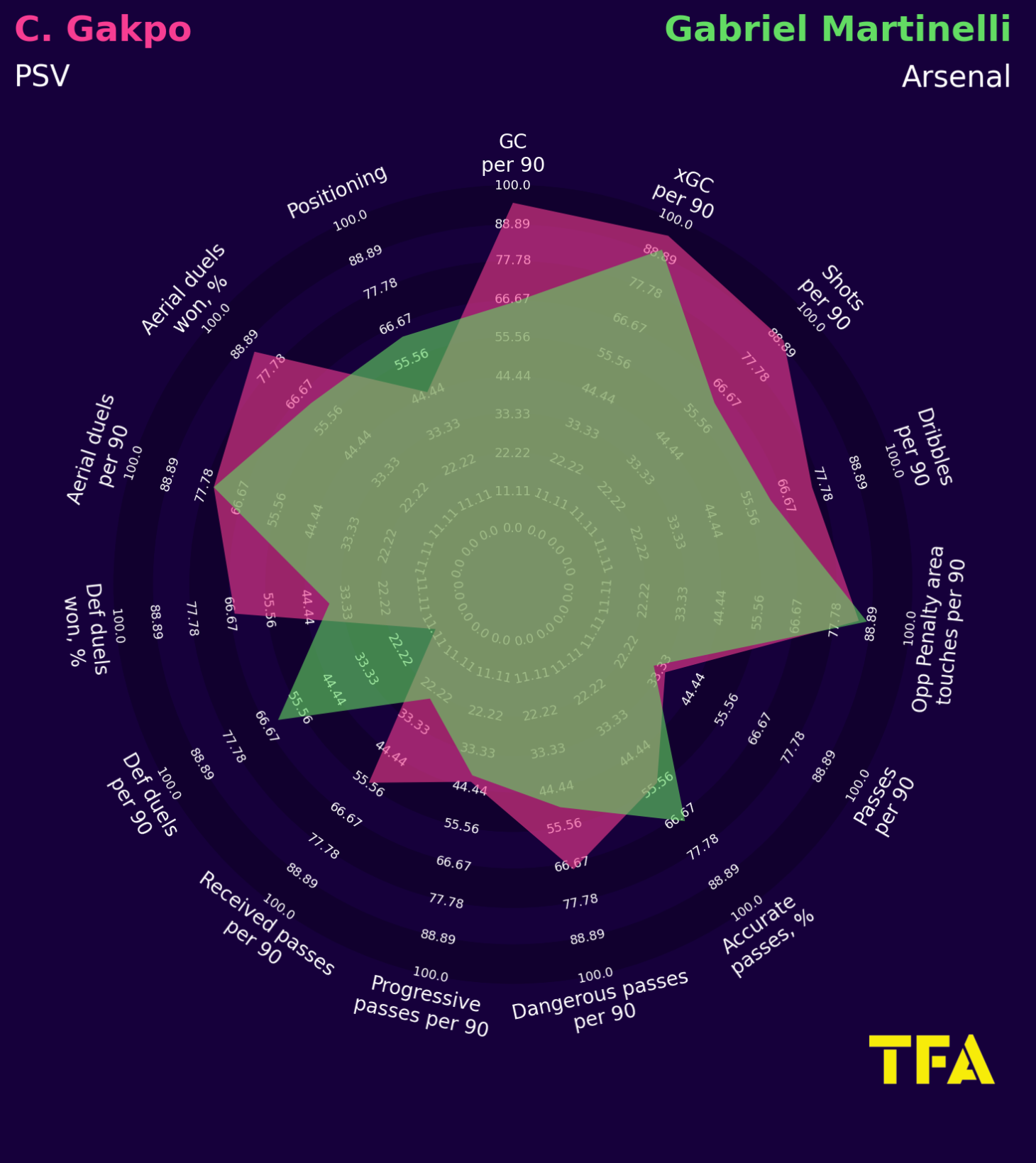 Gabriel Martinelli has been a regular on Mikel Arteta’s side. The Brazilian has played 14 EPL games and has five goals along with two assists. Both these players have a few things in common, with goal-scoring being their most common trait. However, the above viz shows that Gakpo has created more threats and has better attacking stats. He has attempted more dribbles, shots, and dangerous passes and is also a threat in the air. Gakpo could be a better option for Mikel Arteta to win the league title. 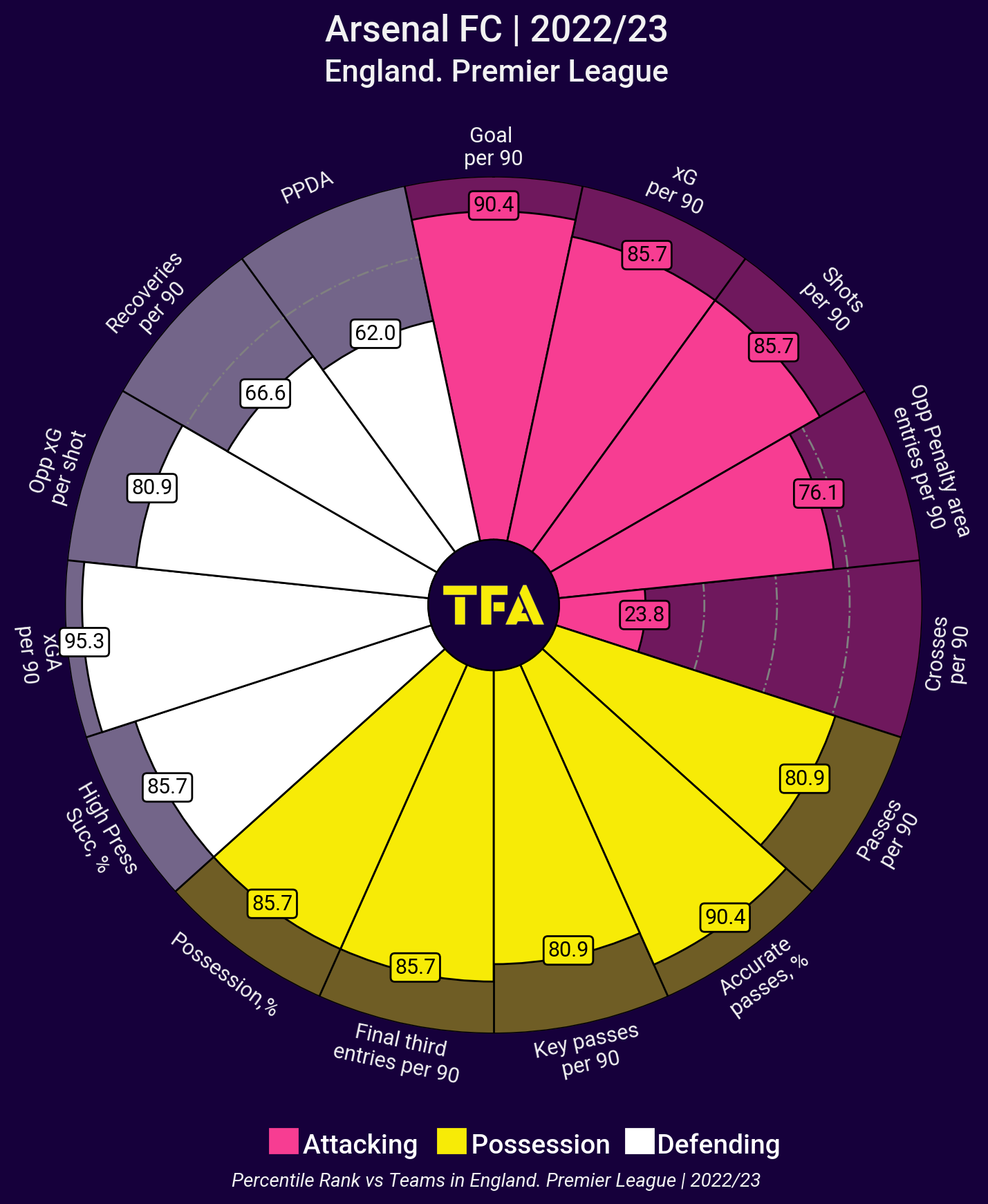 Arsenal have been on top of their game this season. They are rated at the top in some of the stats. The area where they have lacked is in making entries into the opposition penalty area and delivering crosses. Gakpo will provide an extra edge from the left side, and his creativity could help them win the league title after a very long period.

Cody Gakpo could likely be on his way from the Dutch Eredivisie to the English Premier League in the winter transfer window. Two of the English giants are the 23-year-old’s likely destinations. PSV will demand a huge price, and these teams will have to compete with some other European teams as well for the signing of the player. Cody Gakpo adds creativity and a goal-scoring threat, and he is a crucial member of any team.