Leicester City will host relegation-threatened Everton at the King Power Stadium in the English Premier League. Everton are currently in the relegation zone and are battling for survival. They completed a 1-0 victory over European champions Chelsea in the previous game and gained three crucial points in their battle for survival. The hosts, on the other hand, are winless in their last four league games. These two teams faced each other two weeks ago and played out a 1-1 draw. 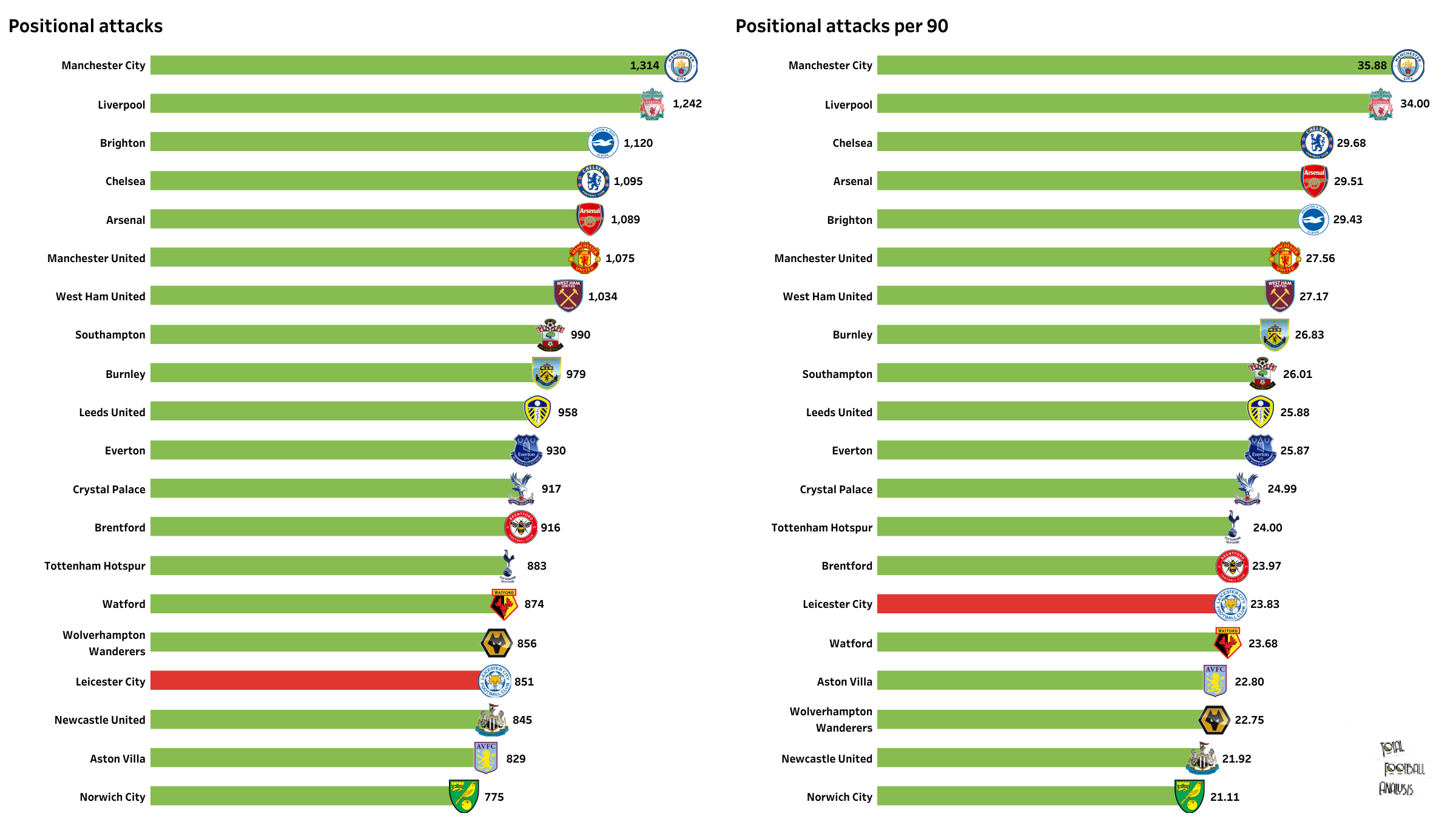 Leicester City have played 33 games this season and have managed to win 11 of them. They have suffered 13 defeats, and the other nine games have ended in draws. The Foxes have scored 48 goals with an xG rate of 41.55. In return, they have conceded 54 goals with the second-highest xGA rate of 66.28. The above viz shows that Brendan Rodgers’ men have attempted fewer positional attacks than some of the teams ranked below them. The Foxes have played one or two games fewer than the teams ranked above them, but the positional attacks per 90 average are also less.

The Foxes have attempted 360 shots this season with an average of ten shots per 90 minutes. They have managed to hit the target 130 times. Of the 360 shots, 211 were attempted from inside the opposition’s penalty box, with 87 of them being on target. The above viz shows all the shots attempted from open play. Brendan Rodgers’ men have been a threat through open play, and the team has managed to score a few goals from inside the opposition’s 6-yard box.

Jamie Vardy played the full 90 minutes against Roma in the midweek and could be rested for this match. After sitting on the bench in midweek, Timothy Castagne and Caglar Soyuncu would expect a place in the starting XI.

Everton have registered nine wins in 33 matches this season and scored 35 goals with an xG rate of 39.48. They have suffered 19 defeats, and the defence has leaked 55 goals with an xGA rate of 48.70. However, they have gained some momentum in the last four games, with two wins, one draw and one loss. One of the main struggles this season for Everton is to keep hold of the possession of the ball. The Toffees have attempted few passes this season, and their average is just better than three teams in the league. Frank Lampard’s men have failed to keep the ball possession and created fewer chances.

Everton players have attempted 357 shots and have managed to hit the target 112 times. They have the third-lowest number of shots on target in the league this season. The Toffees attempted 210 shots from inside the opposition’s penalty box, and only 74 were on target. They have struggled to hit the target this season. From the above viz, we can observe that very few goals have been scored from open play in comparison to the opposition.

Richarlison was taken off in the last game, but he was just suffering from a cramp. There are no new injury concerns for the visitors. Dominic Calvert-Lewin will expect some game-time after featuring as an unused substitute in the last game.

This is a must-win game for Everton as they are currently in the 18th position and will look to move up the table. However, they have the worst away record this season in the league and have only registered one win in 16 away games. Leicester City have played 16 games at home and won half of them. This is a crucial match for the Merseyside team’s survival in the league.

The post Leicester City vs Everton Preview: Positional attacks, passes, shot map and more – what do the stats say? appeared first on Football analysis, news, betting and opinion from Everton.