In the 18th match week of the English Premier League, Manchester City takes on Everton. The defending champions are five points behind the league leaders, Arsenal, and cannot afford to drop points going further into the season. Everton, on the other hand, sits just above the relegation zone and will look to avoid their fourth straight defeat.

Manchester City defeated Leeds United 3-1 in their previous match. They have now won 11, drawn two, and lost two matches this season. Pep’s men are the leading goal scorers in the league with 43 goals and an average of 2.28 xG per match. Their defence has been a bit leaky and averages one goal per game.

Everton, on the other hand, suffered a 2-1 defeat at home against Wolves and have now lost half of the matches played this season. The Toffees have registered three wins and five draws. Frank Lampard’s men have struggled at the front and only scored 12 goals with an average xG rate of 1.11. The defence has conceded 19 goals with an average xGA of 1.91.

Manchester City have won the last five matches played between the two teams. This fixture ended 3-0 in favour of City last season. Now we look at some of the stats that could predict the outcome of the match.

How is the season going so far? 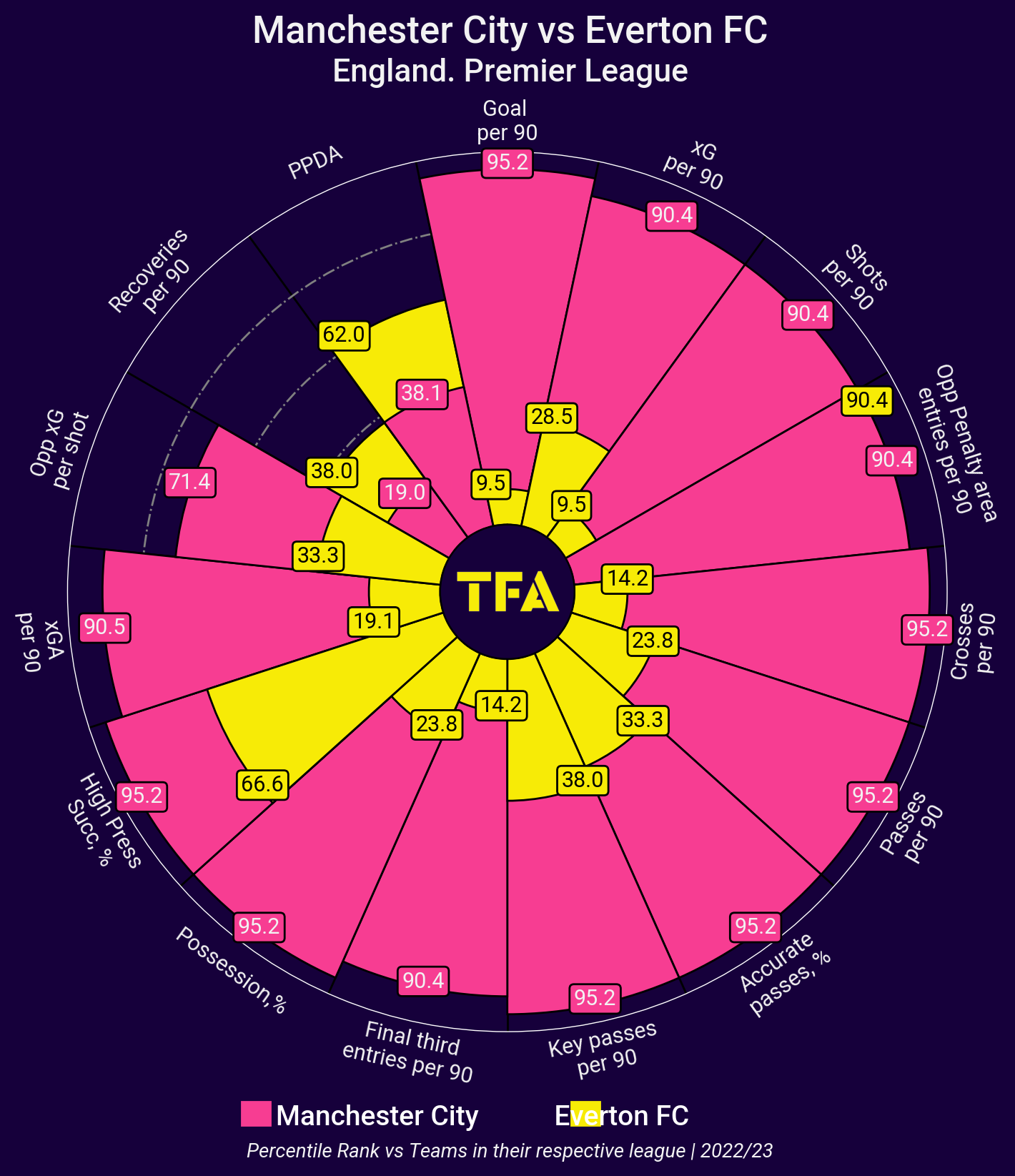 Manchester City have been one of the top performers in almost every department this season. They are ranked at the top in attacking stats. The above viz shows the percentile rank of both teams in comparison to each other as well as in comparison with the other teams in the English Premier League. We can see the dominance shown by Manchester City in all the departments. Everton, on the other hand, are a team with a high rank in the pressing department, but they have shown signs of struggle when looking at the other stats. Manchester City goes in as the favourites to win the match against a struggling Everton side. 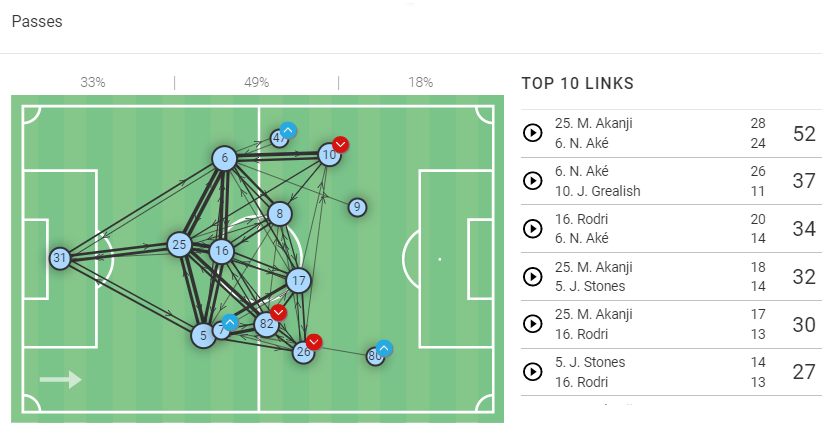 Manchester City came out as the clear winners against Leeds United. Pep’s men played in their traditional 4-3-3 formation. However, the image above shows something interesting. The formation looks more like a back three, with Rodri playing a much deeper role. This allowed Gundogan and Kevin De Bruyne to make some dangerous runs into the final third. Despite playing a deep role, Rodri managed to score the opening goal of the match. Manchester City kept 68.29% possession in the game. 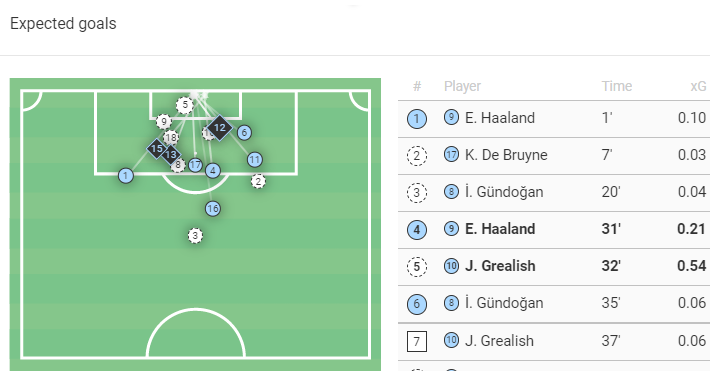 Pep’s men took 25 shots in the last match, and five were on target. The above xG map shows that City players attempted most of the shots from inside the penalty box. They attempted the first shot in the opening minute of the match. Overall, the team averages 17.07 shots with a 37.1% accuracy rate. 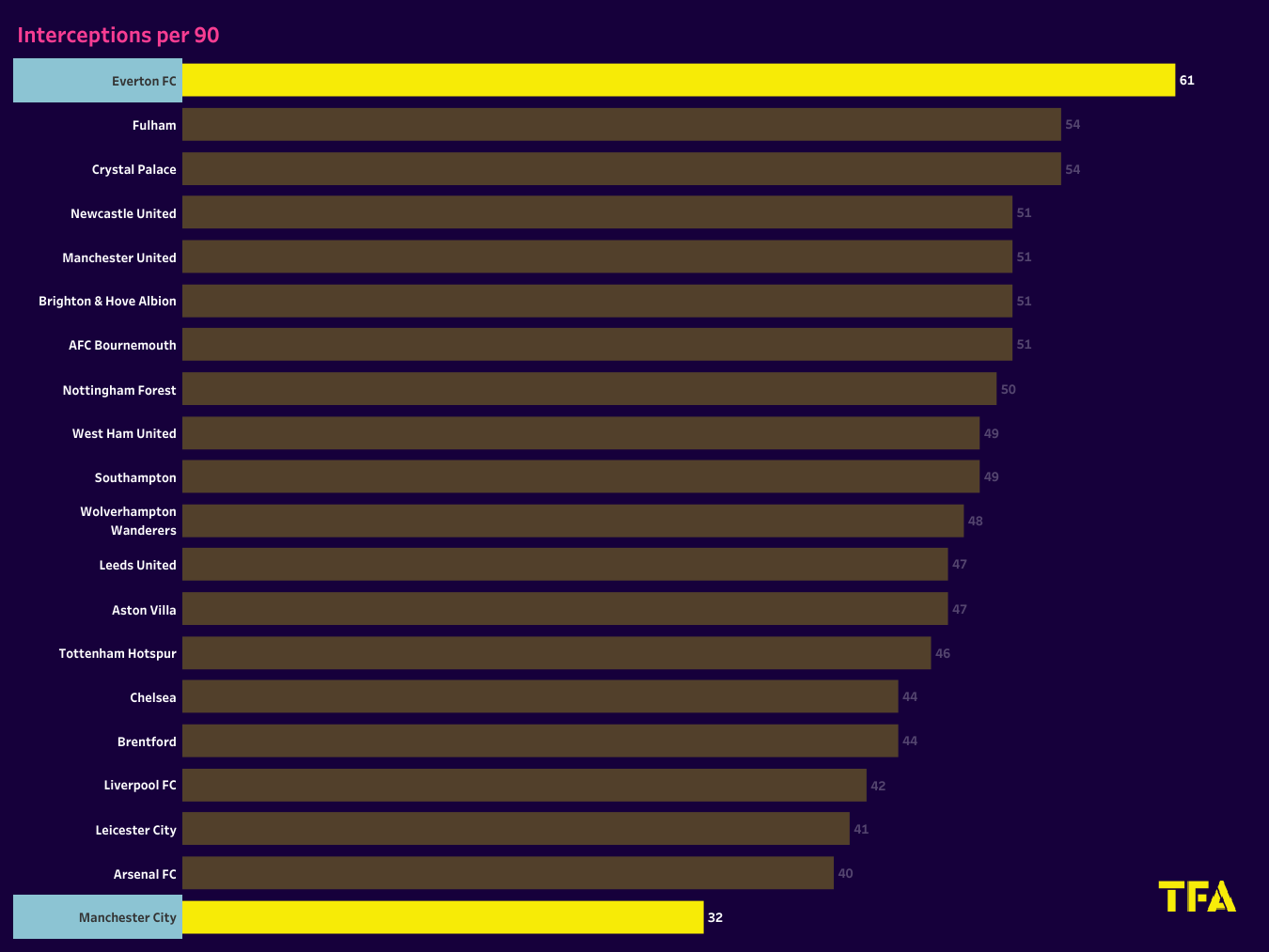 Everton’s defence will have a tough day in the office. They have conceded 19 goals till now, and these are the lowest numbers in the bottom half of the table. Lampard’s men have allowed other teams to create 31.75 positional attacks and take 14.5 shots against them per match. These numbers are close to City’s average. Everton’s defence has won 61.2% of their defensive duels and 39.6% of their aerial duels. The team’s interception rate is one of the reasons for conceding fewer goals. Frank Lampard’s men have made the most recoveries this season. They average way ahead of other teams. He will expect the same level of performance from his team in this match. 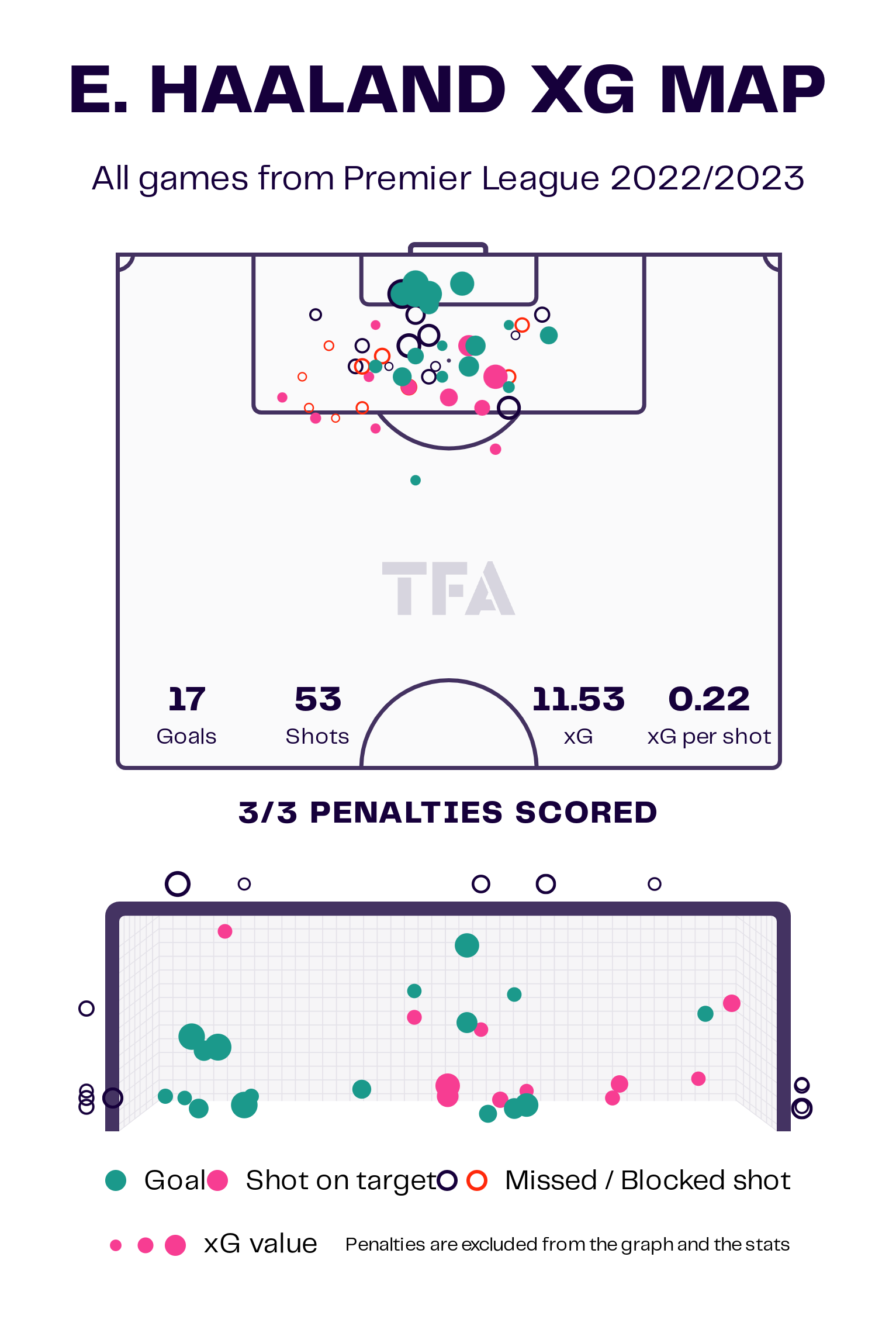 Erling Haaland is the most popular figure in the English Premier League at the moment. The Norwegian took his tally to 20 goals for the season after scoring a brace against Leeds United. His tall figure and speed allow him to take good attacking positions inside the opposition’s penalty box. It looks like Haaland is eyeing records in his debut season in the English Premier League. 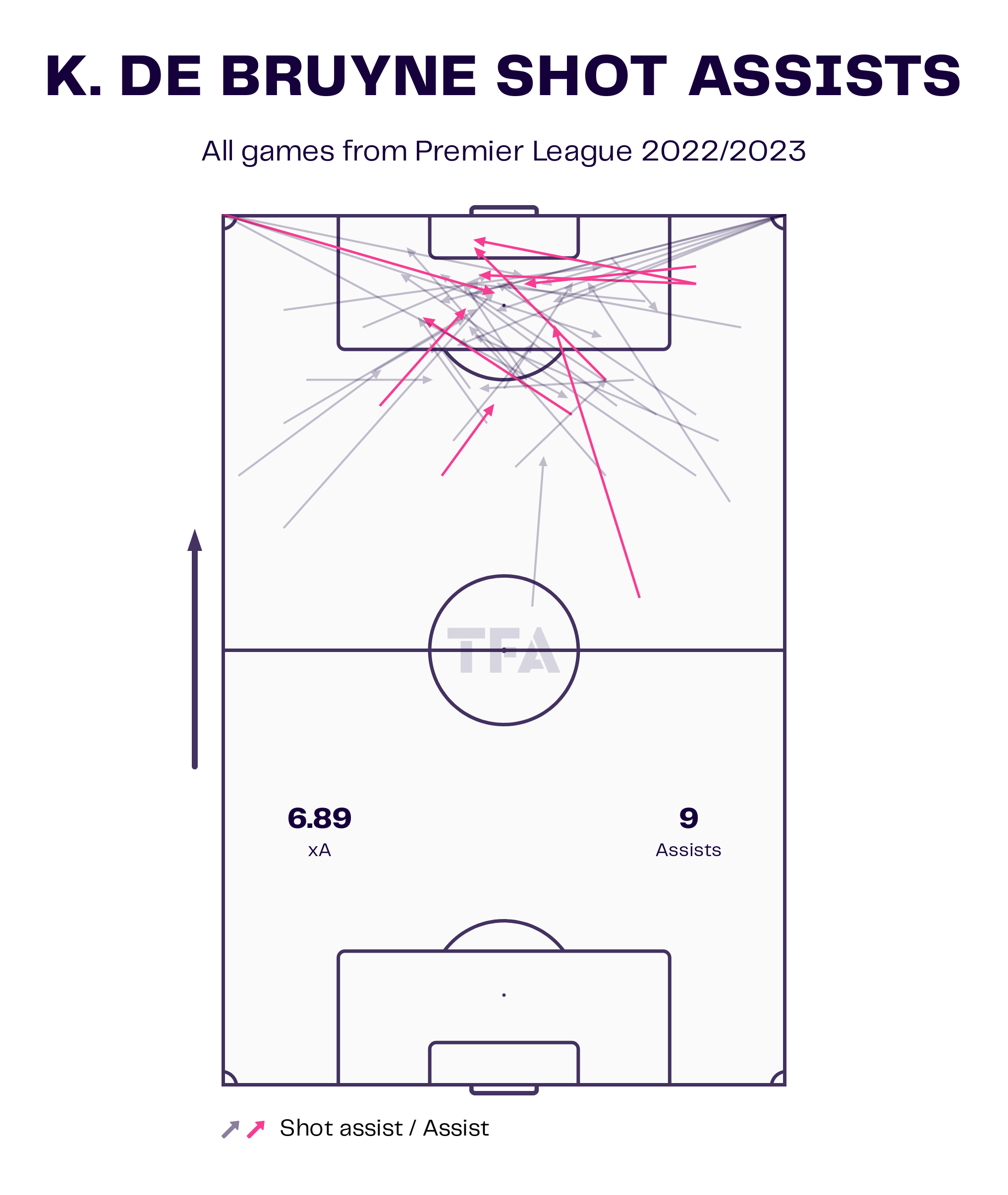 The Belgian international already has nine assists to his name and will look to go into double figures in this match. Kevin De Bruyne delivers some dangerous crosses and passes into the penalty box. He has been one of the best creative players that the English Premier League has ever witnessed. Everton’s midfielders need to stay closer to him and stop him from delivering such passes.

Ruben Dias and Julian Alvarez will miss the fixture for the home team.

Yerry Mina and Dominic Calvert-Lewin are likely to miss the match for Everton.

Manchester City have the upper hand against a struggling Everton side. Frank Lampard needs some results if he wants to save his job. However, City can’t afford to drop points and will be hungry for three points.