Alex Iwobi made a big-money move from Arsenal to Everton in 2019. He was regarded as a bright prospect at the Emirates, but Arsenal had some other plans and thought about making money by selling the 26-year-old at that time. The Nigerian international has been a part of the Toffees’ setup since then but has failed to make a lot of impact at Goodison Park. However, things are starting to change under Frank Lampard for the Nigerian player, and he is starting to make his mark in an Everton t-shirt. Alex Iwobi has been an integral part of the starting lineup and is in the midst of his most productive season at Goodison Park. We now look at some of the stats that show why Alex Iwobi is the go-to man for Lampard.

The change in role 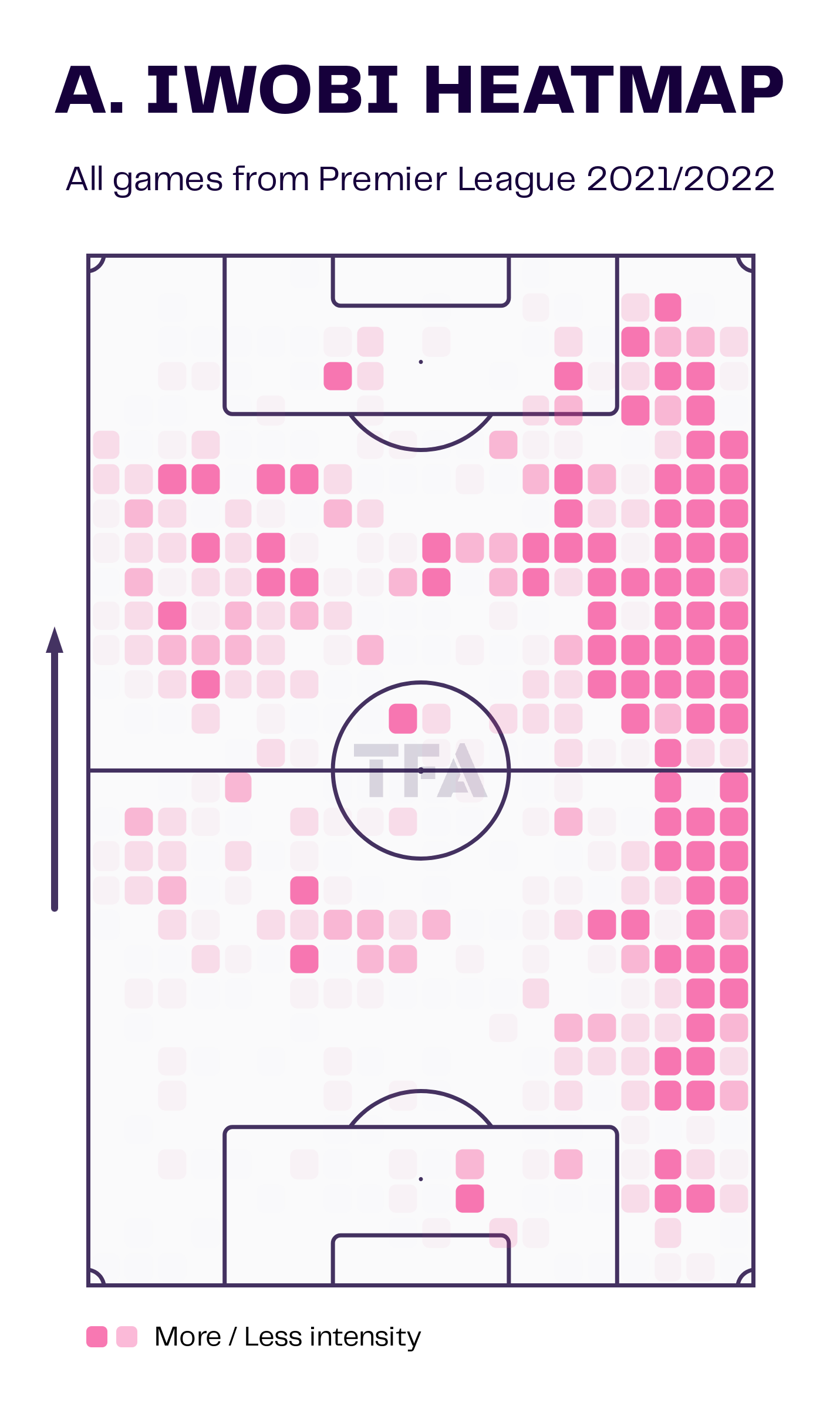 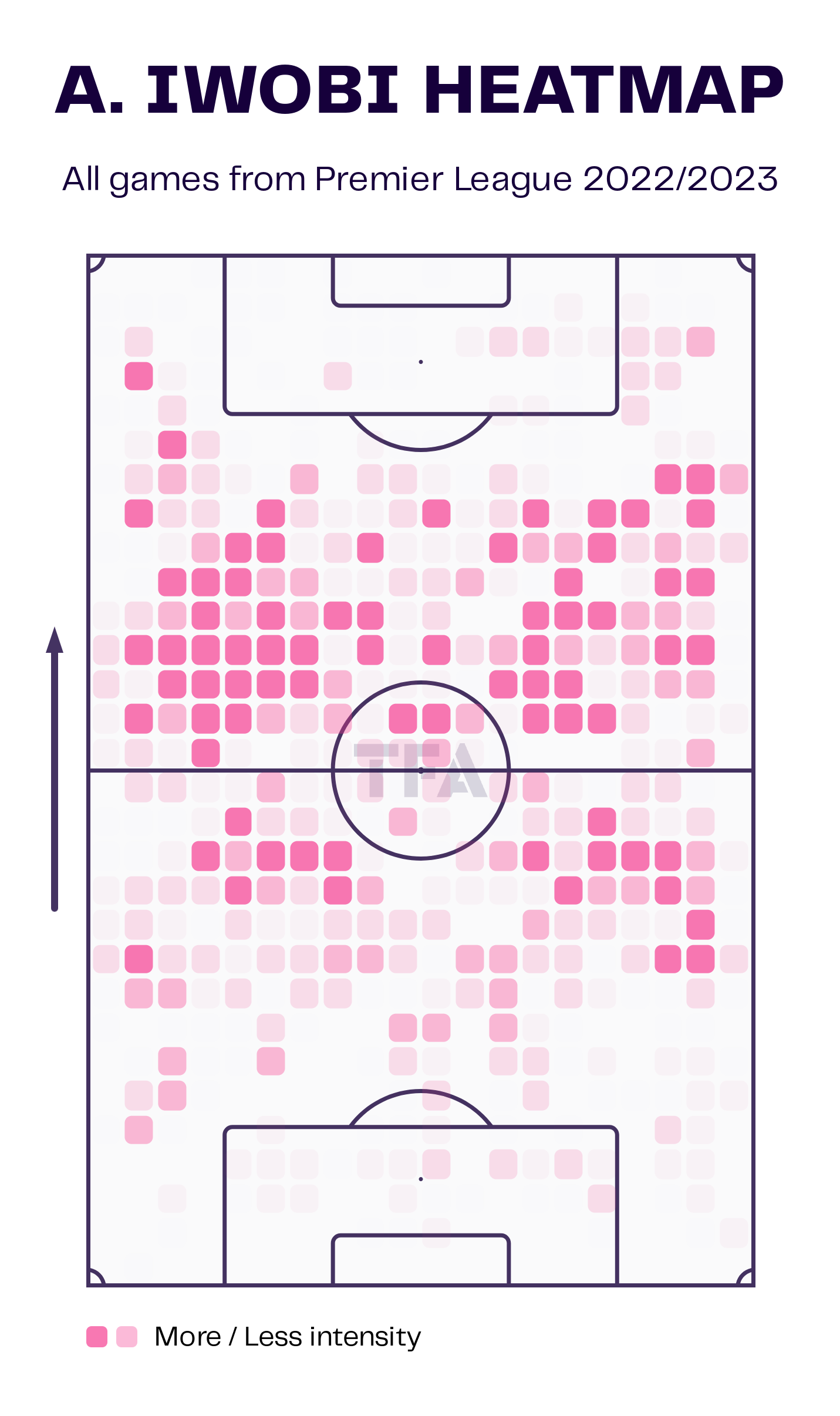 Alex Iwobi has played wide throughout his career. The attacking midfielder was used on the flanks by his previous managers at Arsenal as well as at Everton. Frank Lampard decided to change the role of the player and give him a more central role in the team. The above two vizzes show the heatmap of the player. We can observe that Iwobi played more on the right flank and was used as a right winger, wing-back, and full-back. This season, he has been a regular under Lampard and has started in all 15 matches played by his side in the English Premier League. The 26-year-old has featured as a centre midfielder and attacking midfielder. This change in role has allowed Iwobi to score a goal and provide five assists. Frank Lampard trusted the creativity of his player and gave him a more suitable role in the team. 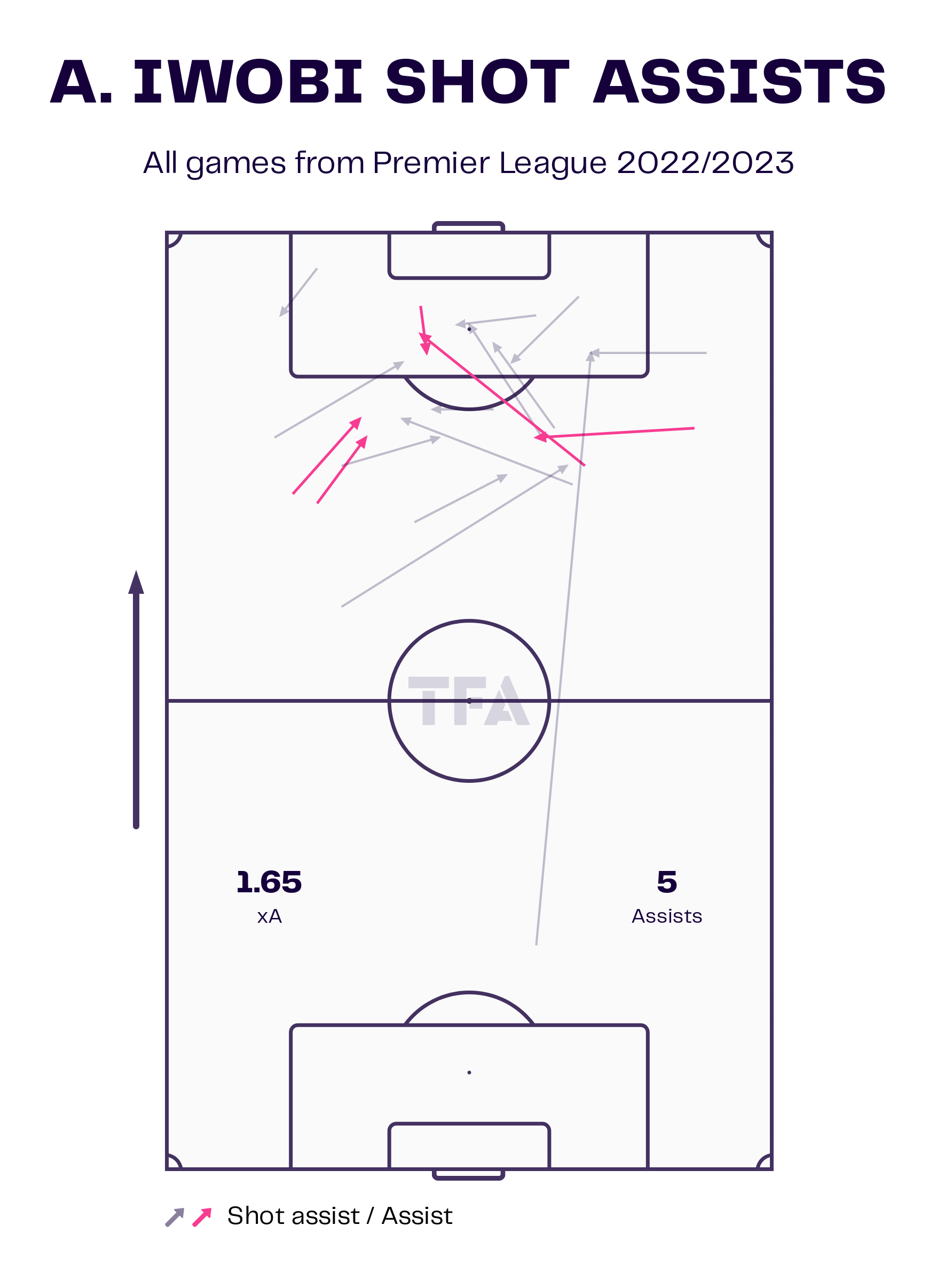 Alex Iwobi’s new role in the team has allowed him to show some creativity on the field. The Nigerian has five assists to his name and is the most creative player on his side. Alex Iwobi passes the ball 37.7 times per 90 minutes and has an accuracy rate of 83.4%. These passes include 6.77 passes to the final third and 2.15 passes to the penalty box. From the above viz, we can observe that Iwobi has found his teammates inside the penalty box and on the edge of the penalty box on occasions, and five passes have led to an assist. 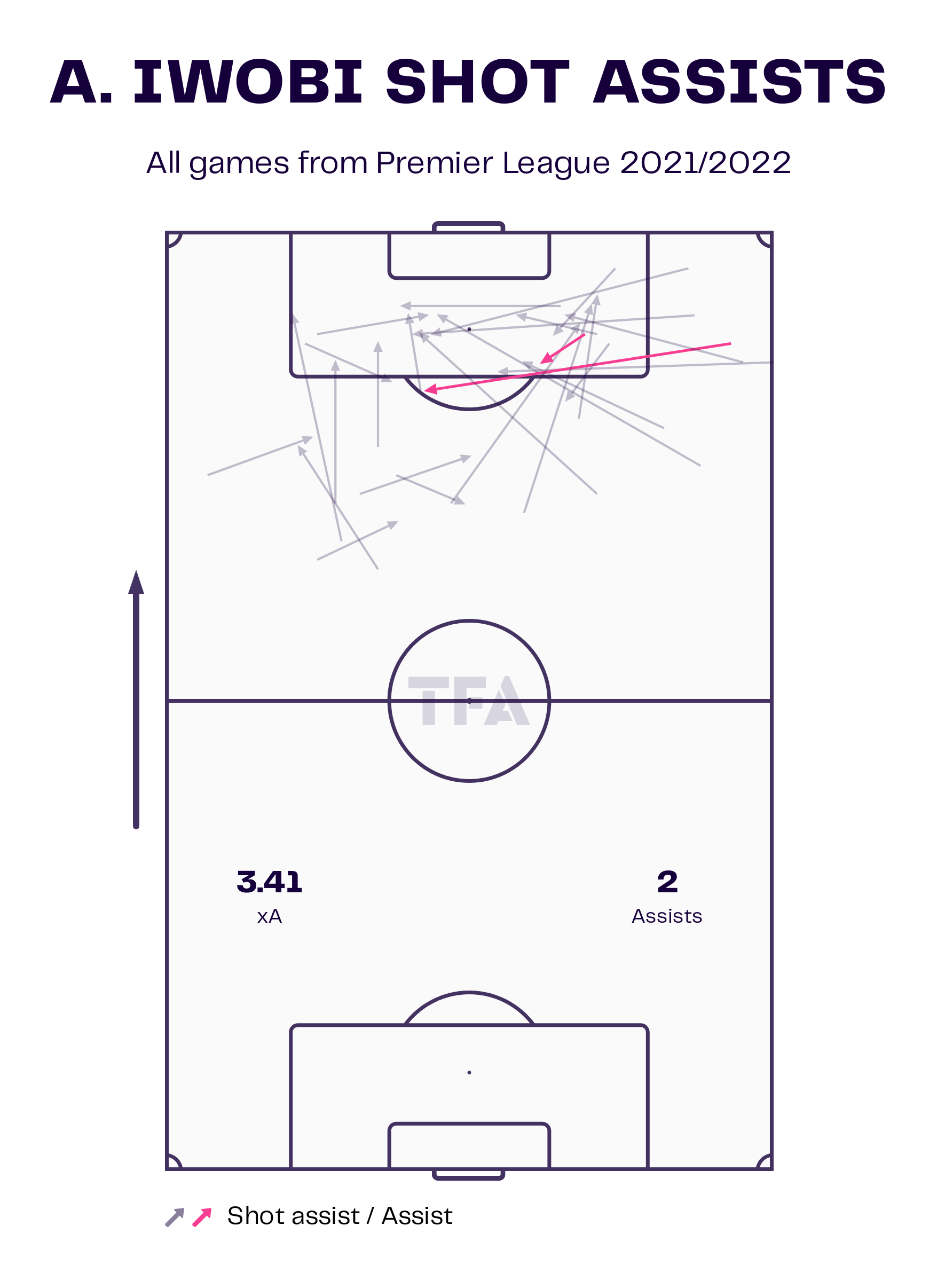 Things were a bit different last season. Iwobi played on the right side, and most of his shot assists weren’t converted. The 26-year-old passed the ball 29.66 times per 90 minutes and had an 80.6% accuracy rate. A total of 3.6 passes were attempted to the final third and 2.57 passes to the penalty area. The role of the player has changed this time as he keeps more possession of the ball and is responsible for bringing the ball from defensive areas to attacking areas. 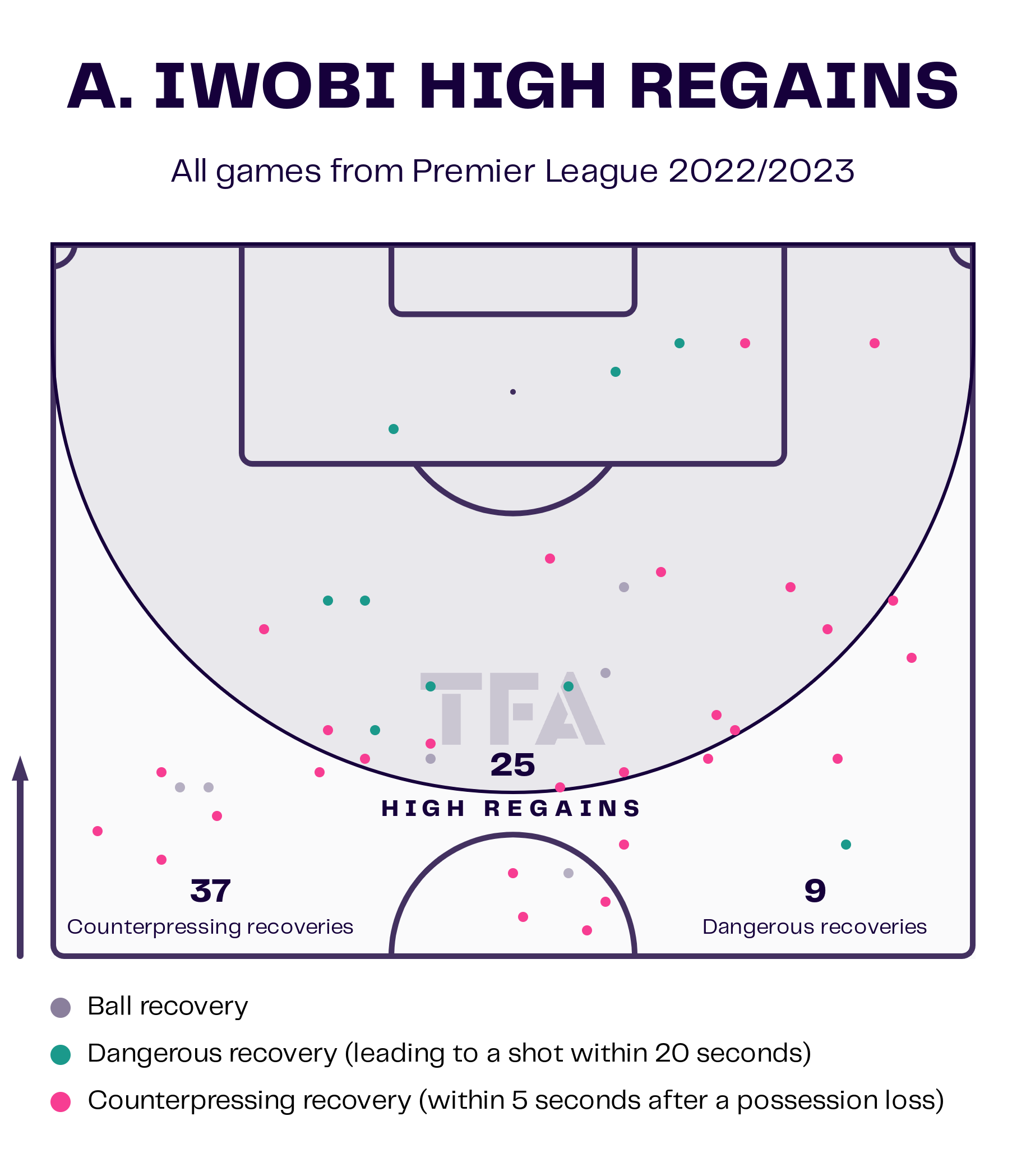 Alex Iwobi has taken on the role of recovering the ball in dangerous zones, especially in the final third. The 26-year-old makes 6.15 recoveries per 90 minutes, and 53% of them have been made in the attacking half. These include 25 regains in the final third. By looking at the above viz, we can observe that Iwobi has impressed by making nine dangerous recoveries in and around the penalty area.

The 26-year-old is growing in confidence under Frank Lampard. He is enjoying his most productive season at Goodison Park. The manager and the team will expect him to set up more goals in the remaining season. The Nigerian will also look to contribute more and help his side finish in the top half of the table.