Seventh-placed West Ham United travel to the Amex Stadium to take on 10th placed Brighton in the final matchday of the 2021-22 Premier League on 22nd May 2022. The last time these two teams met back in December 2021, it was a 1-1 draw at the London Stadium, with Neal Maupay striking in the penultimate minute through his overhead kick. Coming into this match, Brighton drew 1-1 at Elland Road against Leeds United, and West Ham held Manchester City to a 2-2 draw. 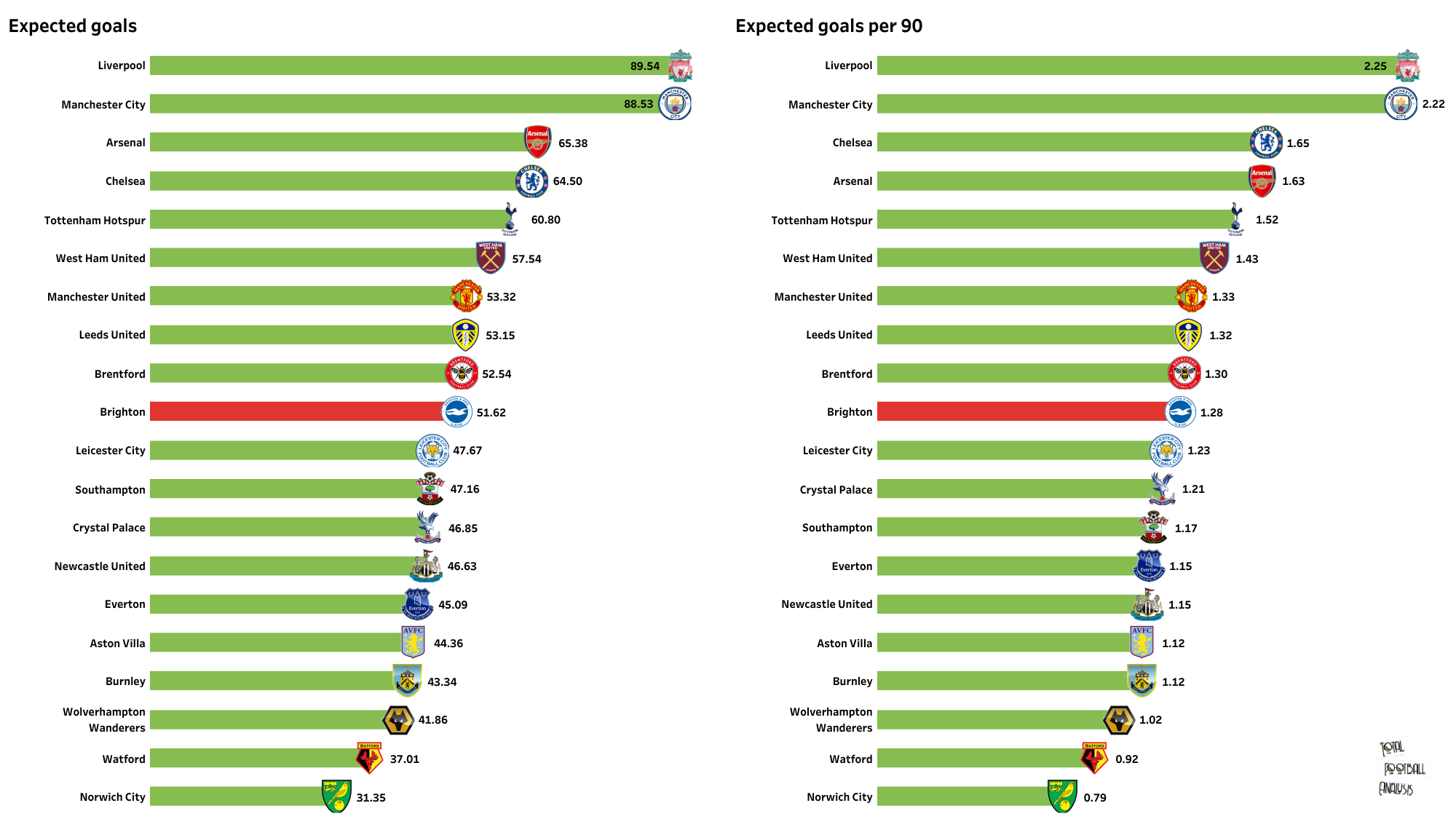 Brighton come into this match having drawn 1-1 at Elland Road against Leeds United. Danny Welbeck scored for the Seagulls before a stoppage-time equalizer from Pascal Struijk. Brighton’s record now stands at 11 wins, 15 draws and 11 losses, with a goal difference of -4. According to xG, Brighton should have netted 52 goals, but in reality, they have netted exactly 3/4th of the xG so far this season, with 39 goals to their name – a big underperformance in front of the goal. 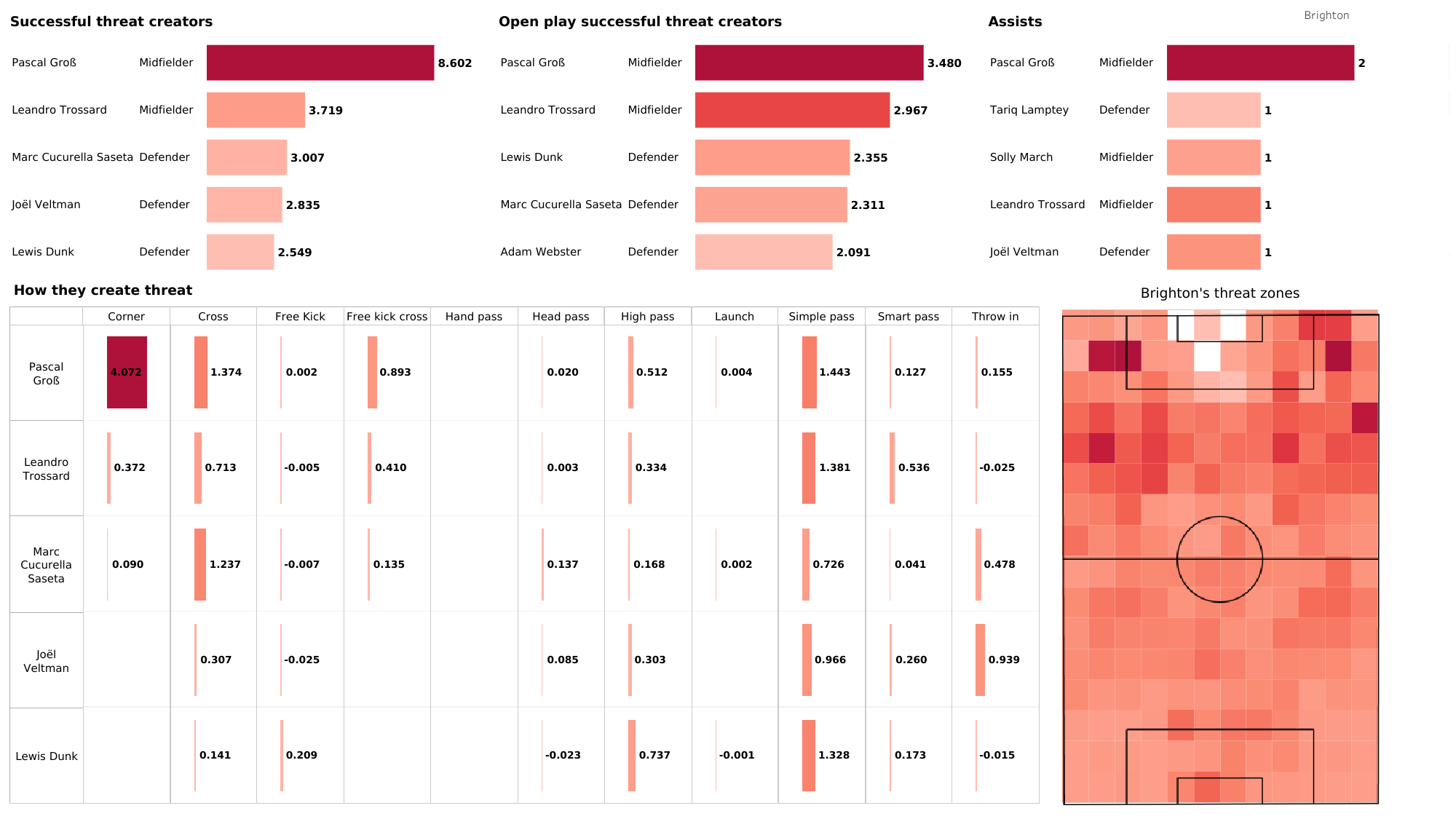 The German midfielder, Pascal Gross, is Brighton’s most successful threat creator in the 2021-22 Premier League from both open play as well as from set-pieces. However, it is the Zambian man, Enock Mwepu, who is the Seagulls’ leading assist provider in the Premier League this season, with just four to his name. Gross has three, which is the joint second along with Leandro Trossard and Jakub Moder. 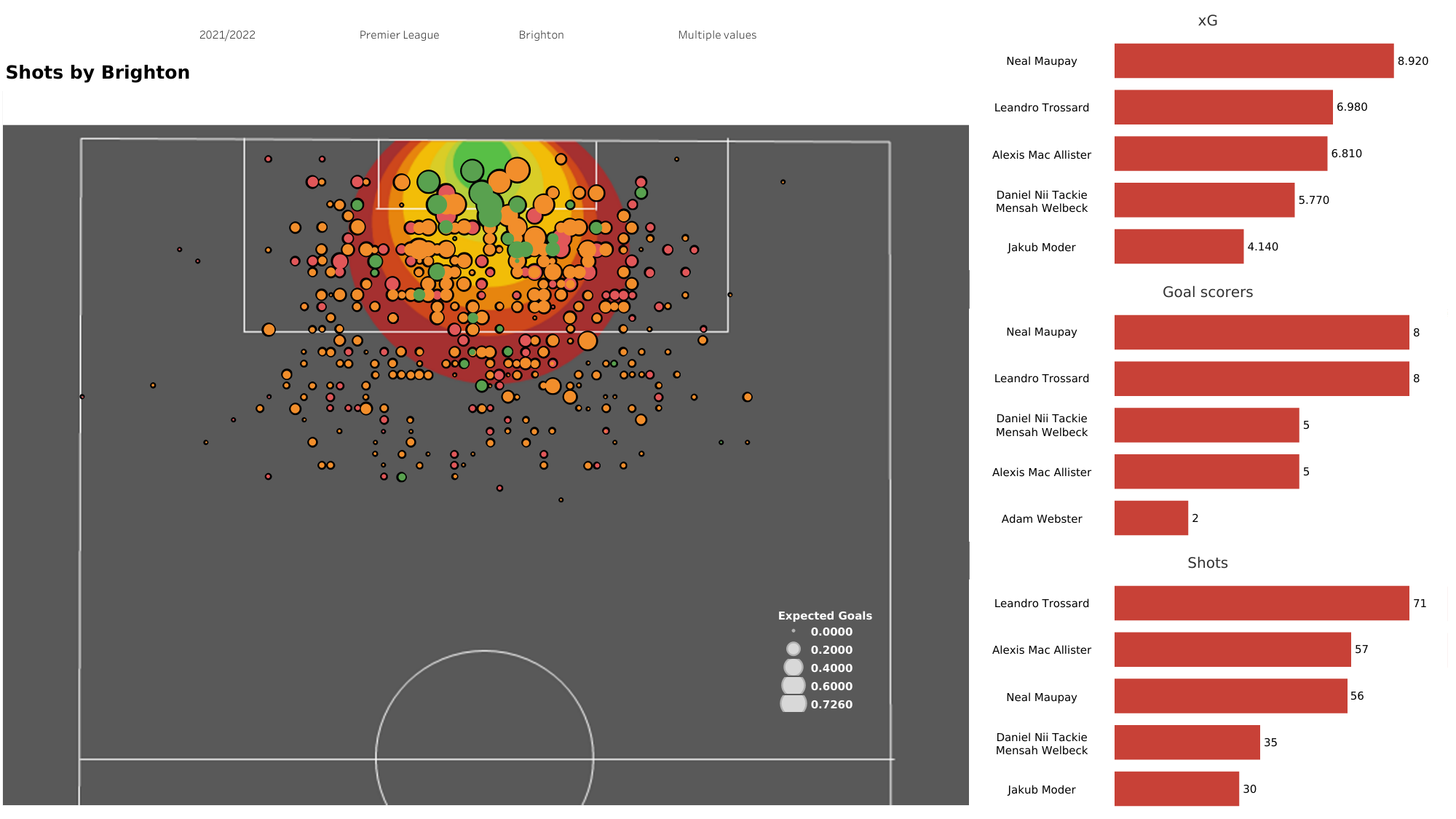 Seen in the above visual is the shot map of Brighton in the Premier League this season. Their underperformance going forward can be seen with several big chances missed from within 10 yards. Had the Seagulls buried at least some of these chances, they would have surely had a positive goal difference by now. In total, Brighton have taken 465 shots and scored 37 goals, thus giving them a conversion rate of 12.57 shots per goal scored. 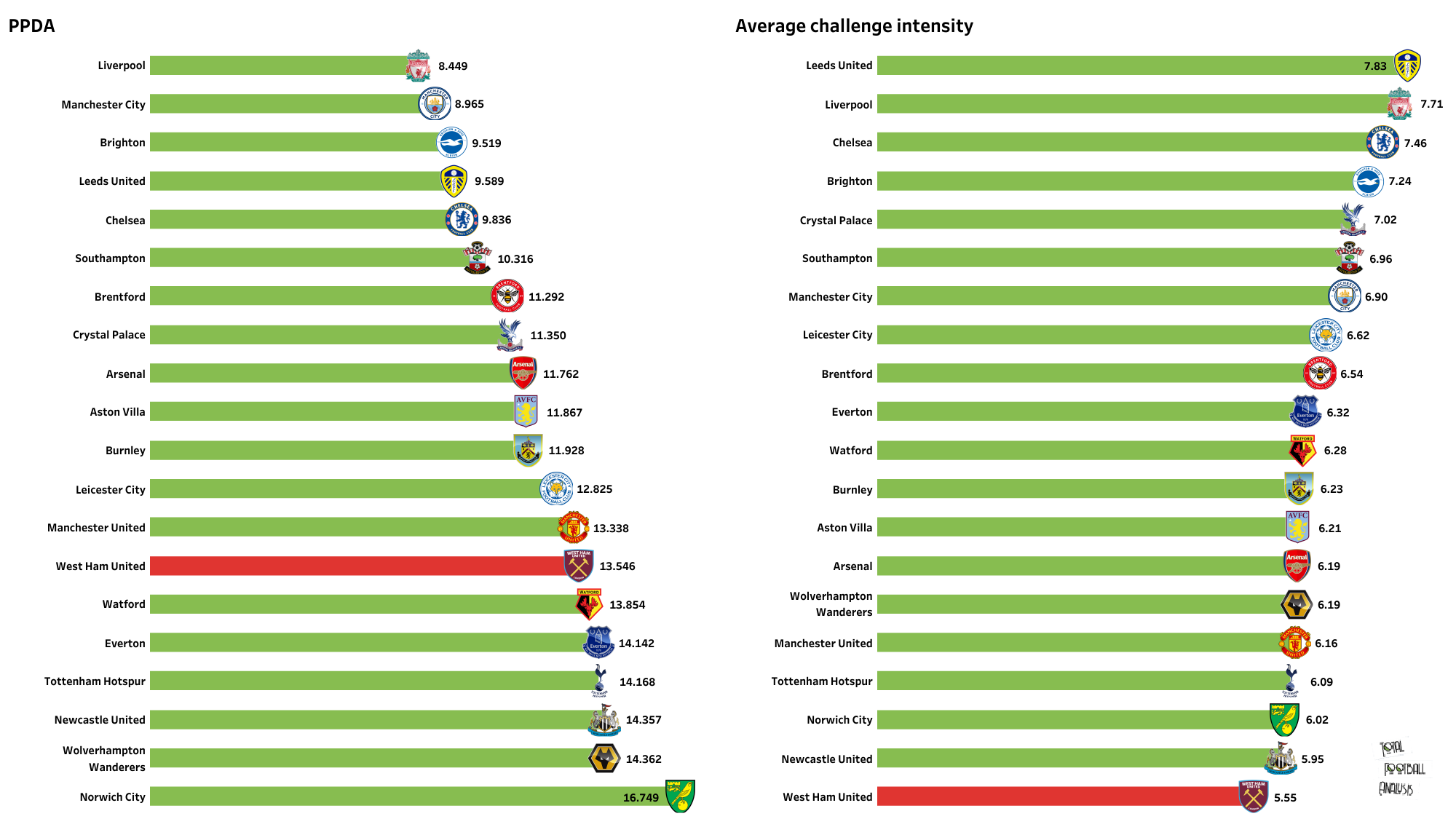 West Ham United head into this clash having drawn 2-2 against Manchester City at the London Stadium. Jarrod Bowen fired the Hammers to a halftime lead before they let the lead slip in the second half. And thanks to Lukasz Fabianski saving Riyad Mahrez’s penalty in stoppage time, they were able to walk away with a draw. West Ham now have a record of 16 wins, eight draws and 13 losses, with a goal difference of +11. This season, the Hammers have the lowest average challenge intensity of any team in the division. This metric measures how many defensive actions a team is performing per minute when the opponent is having possession. 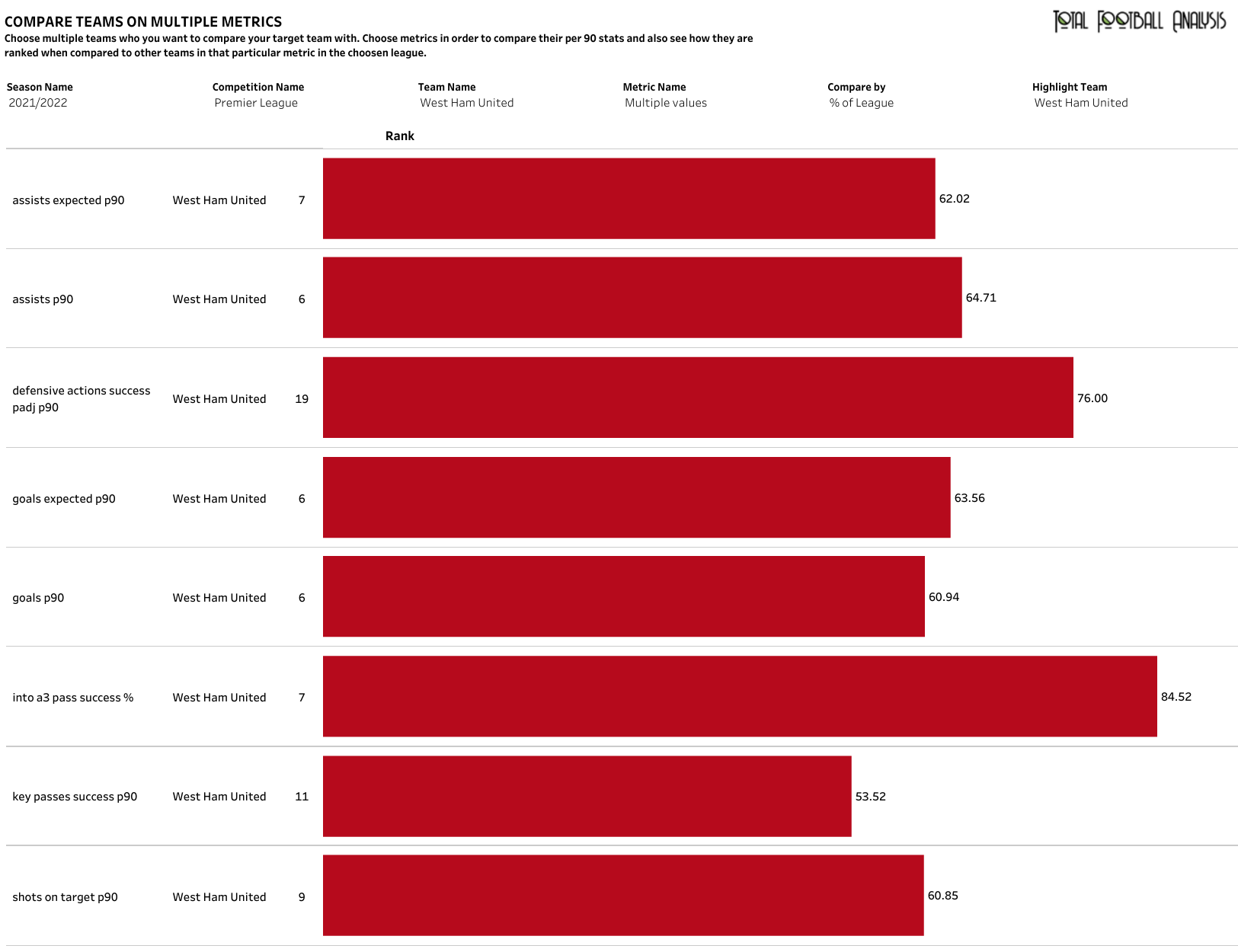 Given above is West Ham United’s rankings in certain key categories relative to the rest of the league. Besides defensive actions success adjusted for possession (PADJ) per 90 and key passes per 90 success, the Hammers rank in the top half of the table in the above-displayed categories, including goals per 90 and assists per 90.

West Ham United are assured of at least a Europa Conference League qualifying spot for the next season. But they can still get the Europa League spot should they win this match and Manchester United slip up in their final game of the season at Crystal Palace.