Graham Potter’s Chelsea will travel to the American Express Community Stadium to take on his former side Brighton in the English Premier League. There has been a change in fortunes on both sides since Potter joined Chelsea. The Blues are enjoying a good run of form under their new manager, while the Seagulls are struggling to find their early-season form.

Brighton have won four, lost four, and drawn the other three games. They have scored 15 goals with an average xG rate of 1.59 per match. The defence has conceded 14 goals and averages 1.1 xGA per match. They have struggled under Roberto De Zerbi and have collected just two points in five matches.

Chelsea, on the other hand, are unbeaten under the new manager in all competitions. They have won six, drawn three, and lost two matches this season. The Blues have scored 16 goals and conceded 11. The average xG rate and xGA rate are 1.41 and 1.37, respectively. 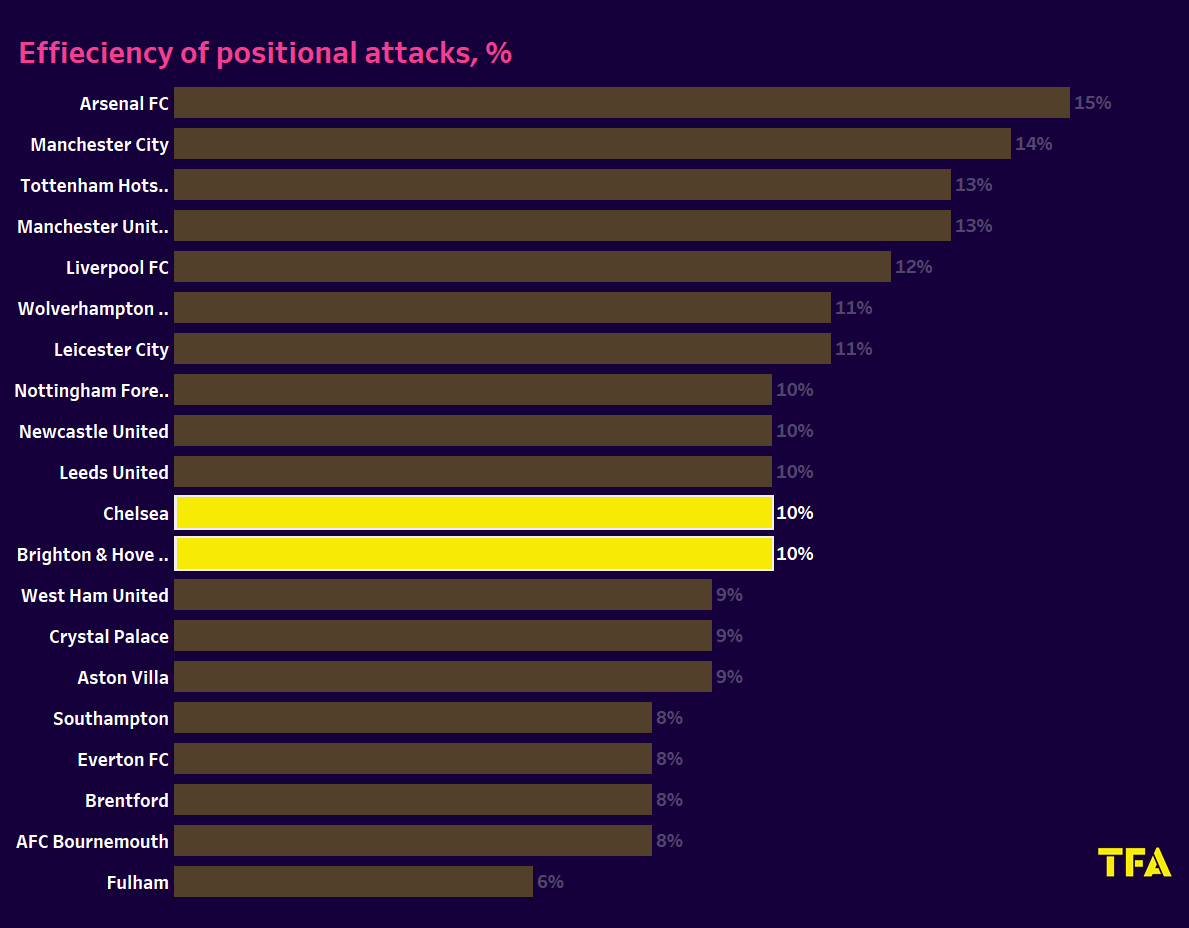 Chelsea and Brighton have played some eye-catching football this season. They have built their play from the back and are patiently waiting for their chances to score goals. However, these two teams haven’t been efficient in goal scoring, keeping in mind the number of positional attacks created by them. Chelsea averages 33 positional attacks per match, while Brighton’s average is 30 attacks. Some of the teams ranked above Chelsea and Brighton for efficiency in attacks in the above viz sit below them in the league table. Chelsea have scored only one goal in the last two matches, while their opponents netted their first goal in four league matches against Manchester City. 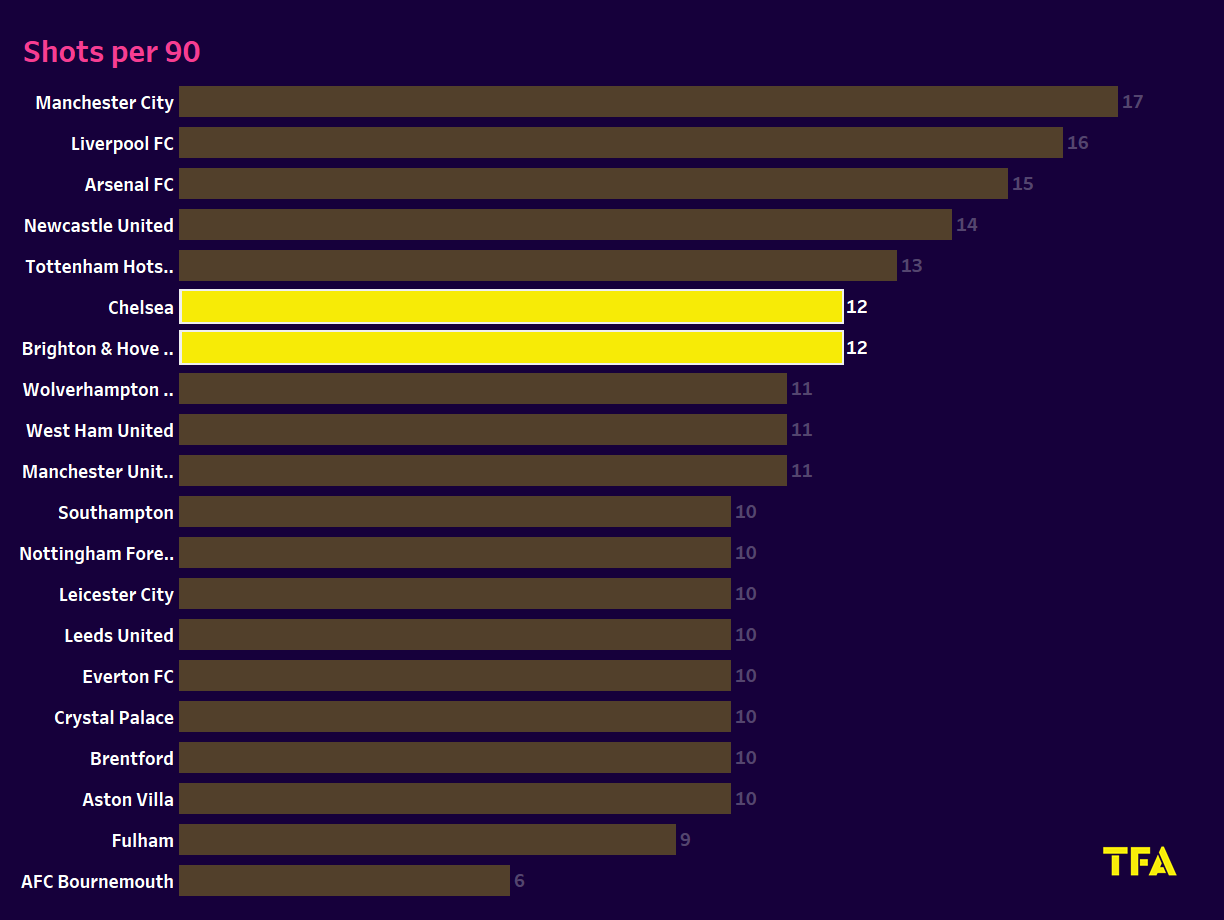 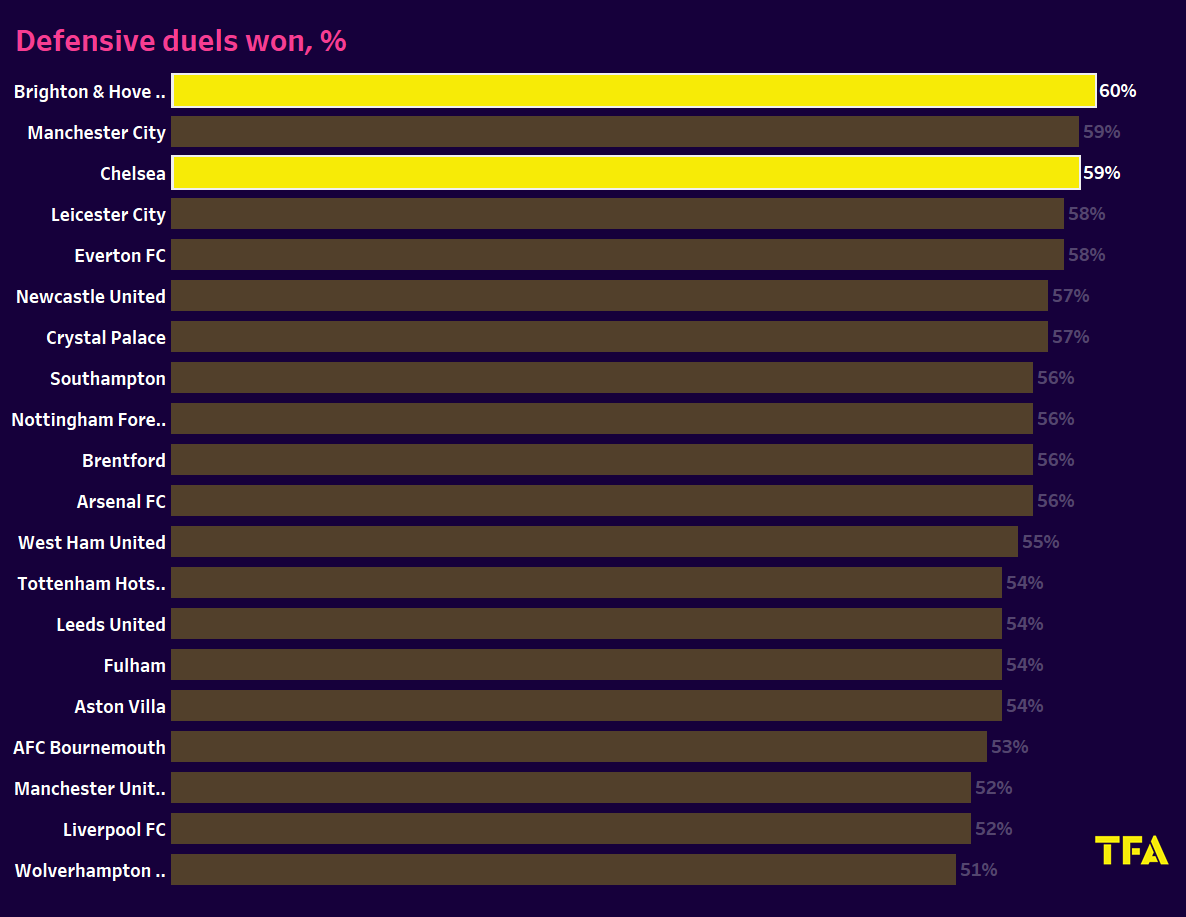 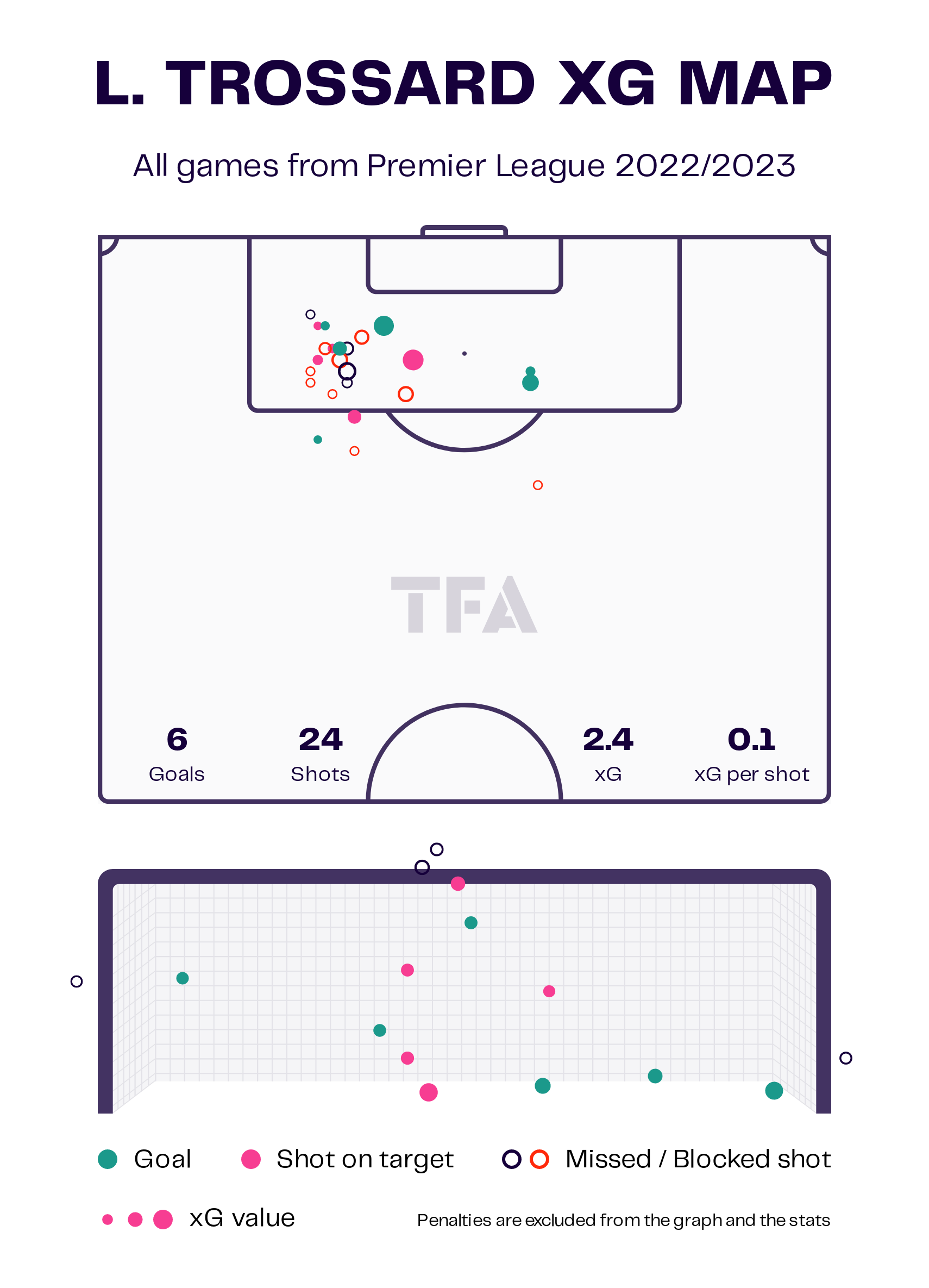 Leandro Trossard returned to the scoresheet and netted his sixth goal of the season against Manchester City. He will be the main threat for the Seagulls. The 27-year-old has attempted 24 shots and 11 have been on target. Trossard plays on the left side of the attack and likes to cut inside and attempt shots. He has attempted 21 shots from the same side and Trevoh Chalobah will have a busy day in defence. 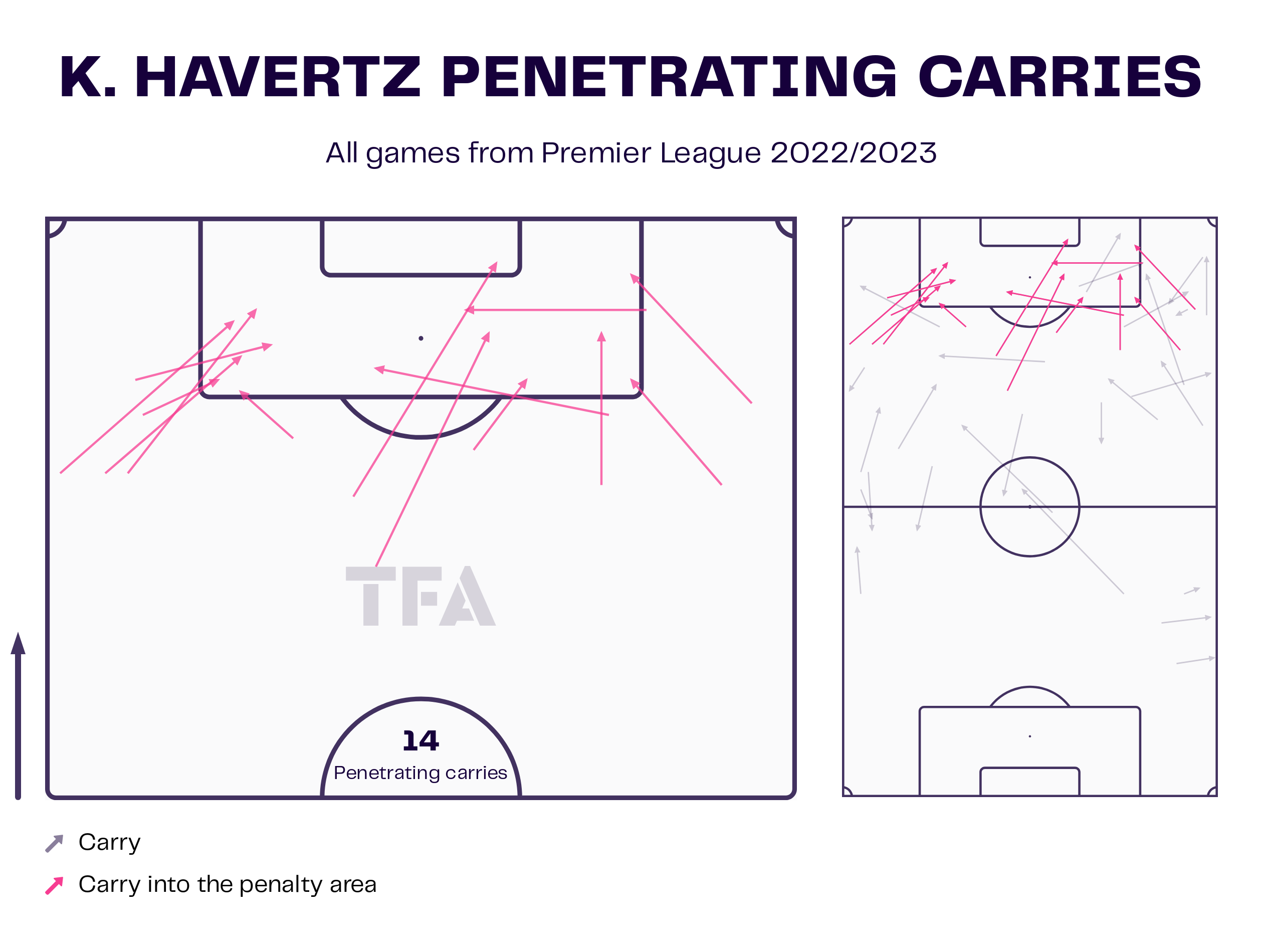 Chelsea have struggled to score goals this season. They have been good in Europe and will continue to carry this form in the English Premier League. Kai Havertz is likely to lead the line after scoring a spectacular goal in midweek. He has scored two goals in ten league appearances. The forward has made a few penetrating runs into the penalty box and will look to link play with other forward players to score a goal. Havertz will also be one of their target men in the box. He has attempted 13 of 14 shots from inside the penalty box and eight have been on target. The German will look to score back-to-back goals and solidify his position in the starting 11.

Adam Lallana and Joel Veltman remain a doubt for this match. Kaoru Mitoma is back in training and could see himself on the bench.

Kalidou Koulibaly missed the Champions League match but could be in contention for this match. Mateo Kovacic also has a minor calf injury and is doubtful for this match. Kepa Arrizabalaga is likely to continue in goal after a decent run of form.

Graham Potter will lead Chelsea to face his former side. Both teams sit in the top half of the table and Chelsea will have the upper hand with the kind of form they are in. Brighton will make it difficult for the Blues to take three points from this game.