In the middle of the chaotic Premier League holiday schedule, Liverpool met Wolverhampton Wanderers in a tensely-played match. The Reds had recently demolished second-place Leicester City in one of the most anticipated matchups of the season, extending their lead on the table. Wolves had also just accomplished an impressive victory in a 3-2 win against Manchester City. This tactical analysis examines the strategies of both sides along with the devices used by Jürgen Klopp and Liverpool to continue their near-unprecedented winning streak. 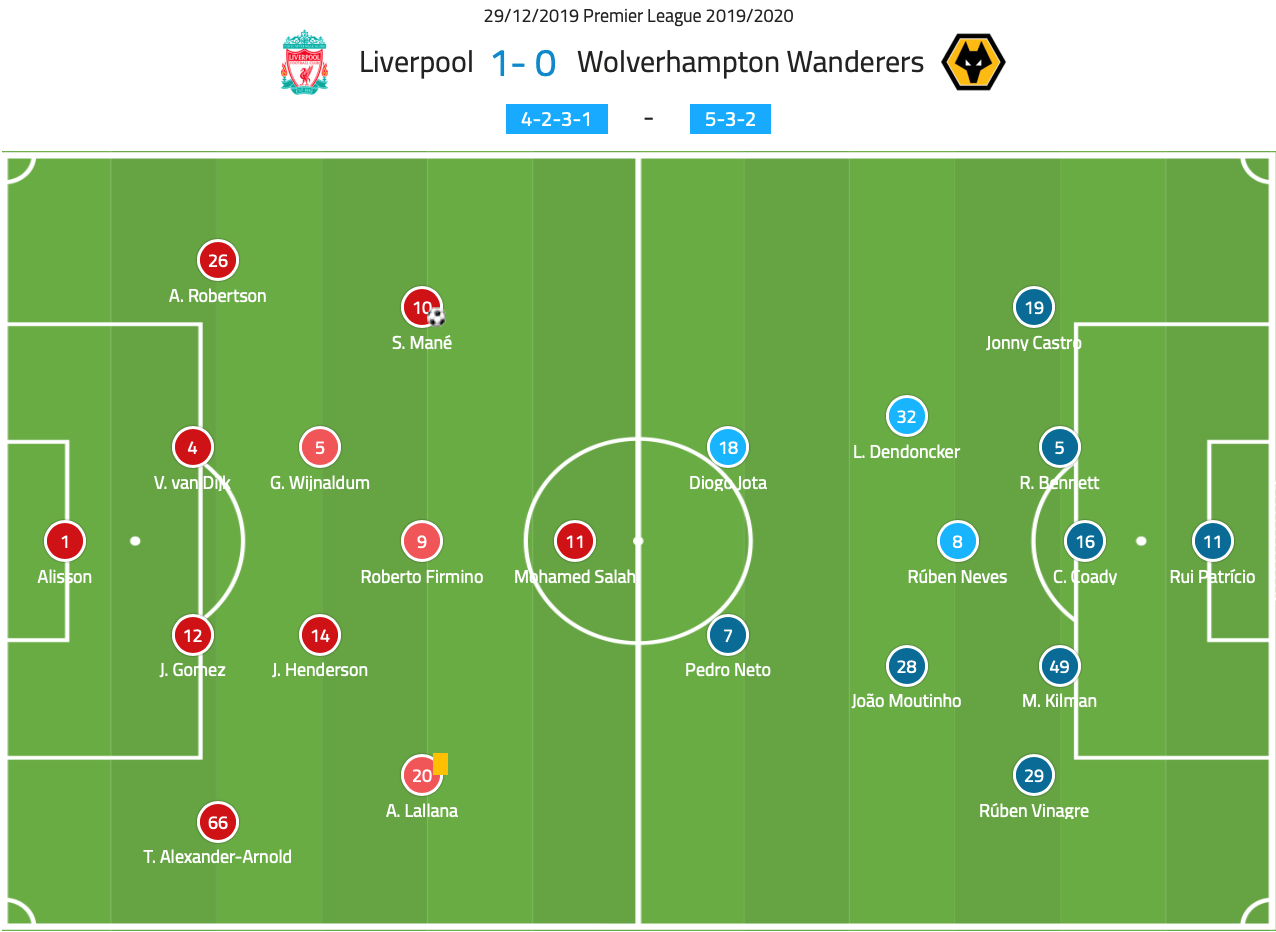 The Premier League leaders came out in a general 4-2-3-1 shape, something they have rarely done this season. This was at times adjusted to a 4-4-2/4-4-1-1 shape, especially later in the match when Liverpool had the lead or were out of possession. Joe Gomez started his second consecutive match alongside Virgil van Dijk despite coming off the bench for a majority of the season. Trent Alexander-Arnold and Andrew Robertson completed the back line as the full-backs. Jordan Henderson and Georginio Wijnaldum started as the two deeper midfielders behind the attack of Adam Lallana, Roberto Firmino, Sadio Mané, and Mohamed Salah. Salah led the line as the central striker, something he has become more accustomed to this season.

Wolves manager Nuno Espírito Santo left the top two league goalscorers for the Wolves- Raúl Jiménez and Adama Traoré- on the bench after they both started and scored in the Manchester City match two days before. In their common back five/back three formation, Ryan Bennett, Conor Coady, and Max Kilman began as the three centre-backs. Jonny Castro and Rúben Vinagre started as the wing-backs, with a central midfield made up of Leander Dendoncker, Rúben Neves, and João Moutinho. Pedro Neto and Diogo Jota led the front line, but both would ultimately struggle to attack with Wolves’ limited shot opportunities.

If you want to read the full tactical breakdown of this game, head over to totalfootballanalysis.com or click HERE

If you love tactical analysis, then you’ll love the digital magazines from totalfootballanalysis.com – a guaranteed 100+ pages of pure tactical analysis covering topics from the Premier League, Serie A, La Liga, Bundesliga and many, many more. Buy your copy of the December issue for just ₤4.99 here

Can Wales youngster be the answer to Manchester United’s attacking problem?

Why Tanguy Ndombele could be Spurs’ player of the year